, utilized a game engine called "Artistoon" in order to create a graphical style similar to Araki's art style in the manga.

The game was set to be released in America on October 24, 2002[1], but was delayed and eventually canceled due to unknown reasons.

Most of GioGio's Bizarre Adventure's gameplay takes place in the form of hand-to-hand combat. All battles are fought 1v1, with every battle being an equivalent to a boss fight. The Stands aid the characters in battle by giving them combat abilities, as well as special attacks. Puzzles are also a part of the game, requiring the use of Stands in order to solve them.

The player must learn an opponent's moves and attack patterns in order to properly find an opening and attack. They can deliver melee attacks, use a character-exclusive special ability, or summon their Stand to attack. Stand barrages and the like are referred to in-game as a "Stand Shoot". All Stand Shoot attacks can be charged to increase their duration and eventually allow the player to attack separate from their Stand, opening up opportunities to create combos. Health cannot be restored in any matter other than Secret Factors, requiring a finer degree of skill from the player than other games of a similar genre in order to succeed.

As long as a character's Stand is on, a Stand Gauge above the player's health will drain. Actions such as taking damage or blocking attacks while a Stand is on will also decrease the meter. A Stand Break occurs if the gauge is depleted, leaving the player character unable to summon their Stand until the gauge refills, along with other situational disadvantages.

Following the events of GioGio's Bizarre Adventure, the game's main mode has 22 chapters (21 playable and 1 consisting entirely of cutscenes). In each chapter, the player faces a different opponent. 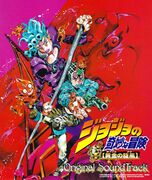 A handful of characters do not appear in the Super Story Mode; instead, they appear as part of the Story Drama, during cutscenes or simply as character models within Gallery Mode.

(E3) 2002, titled simply as GioGio's Bizarre Adventure. The release was eventually canceled due to unknown reasons.

A fan-initiated translation project was developed to completely translate the Capcom game into English. The English patch is a combined effort of the groups Joey Jojo's Wacky Trip and JoJo's Colored Adventure Team.[2] It was released on October 20, 2018.[3]