The First Order from the Boss 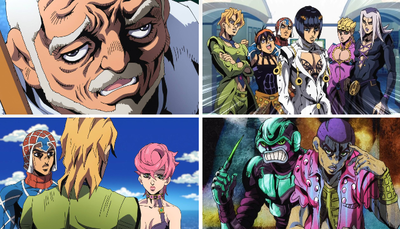 "The First Mission from the Boss"

The First Order from the Boss (ボスからの第一指令, Bosu kara no Dai Ichi Shirei)[1] is the ninth episode of Golden Wind and the one hundred twenty second episode of the JoJo's Bizarre Adventure anime. The episode covers from Chapter 468 to Chapter 471 of the original manga.

Team Bucciarati acquires Polpo's treasure and give it to the capo Pericolo. As a reward, Pericolo promotes Bucciarati. However, Pericolo gives gives him the mission to bodyguard the Boss's precious daughter Trish Una from a squad of hitmen.

After Guido Mista's victory over Sale, Team Bucciarati gathers inside one of the restrooms of Capri. In here, Pannacotta Fugo gives Mista crude first aid by stapling his wound shut, which shocks but also amuses Mista and Narancia Ghirga. Just as Bruno Bucciarati prepares to announce where Polpo's treasure is located, he is interrupted by two oncoming janitors. Narancia tries to tell them off, but the younger janitor antagonizes him and a fight ensues. The scuffle is defused when the second janitor reveals himself, who Bucciarati recognizes as the much-respected capo, Pericolo.

Pericolo has come to Capri on Bucciarati's request to examine Polpo's treasure. To the team's surprise, Bucciarati had hidden it in the walls of the restroom with his zippers. Upon examination, Pericolo deems the jewels to be worth billions of lires in the market and, to reward Bucciarati's contribution, makes him officially a capo.

The gang meets a disguised Trish Una, daughter of The Boss

However, Pericolo then explains that The Boss of Passione has immediate orders from him: Bucciarati must protect his daughter, who is none other than the young janitor in disguise. Pericolo explains that The Boss's daughter is named Trish Una, although the family name comes from her mother, a woman by the name of Donatella. Donatella was once the Boss's lover, back when he operated under the alias of Solido Naso. Although the Boss left Trish's mother behind, she recently fell ill, and, sensing her impending death, began to investigate "Solido Naso." This caught the attention of Passione, but more alarmingly the attention of a rogue team who plans to overthrow the Boss. The Boss immediately sensed Trish was Donatella's child and had ordered her to be secured, but the rogue team is currently trailing her and Team Bucciarati must now bodyguard her until the traitors are dealt with. Because the task was originally Polpo's to fulfill, Giorno worriedly deducts that the rogue team must be a group of Stand Users.

Pericolo then leaves Bucciarati while Trish, who's gone to the restrooms and changed clothes, reappears. She asks Fugo for his jacket, and conceitedly wipes her hands on it before listing several instructions, suggesting her to be a spoiled girl with luxurious tastes. Departing from Capri with the rest, Giorno privately thinks that safeguarding Trish is now his best bet to approach the Boss, although failure will certainly mean death. Meanwhile, one of the operatives from the rogue group, Formaggio, discusses online the consequences of Polpo's death. Polpo was supposed to handle Stand-related business, but his death means that another capo will be guarding the girl.

Narancia is ambushed by Formaggio

Some time later, the group has relocated into a countryside hideout. Bucciarati sends Narancia in town to buy groceries alone, despite Fugo's reservations about him being able to avoid being trailed. However, Abbacchio explains that with Narancia's Stand ability, it will be easy for him to detect and deal with any pursuer. After the groceries are done and Narancia puts the bags inside his car, he notices Formaggio who has mysteriously appeared inside. Narancia tries to play dumb against Formaggio's insistent questioning and falsely affable attitude, until the rogue assassin summons his Stand, Little Feet, to claw Narancia's face. 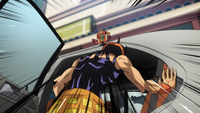 The rogue assassin uses his Stand ability to shrink himself

Angry, Narancia unleashes his own Stand Aerosmith, a miniature plane that flies inside the car and begins to fire everywhere inside it. Formaggio understands how powerful yet imprecise Aerosmith is and that he is at a disadvantage in a cramped space. When Aerosmith launches a bomb, he is forced to use his power and disappears in the explosion of the bomb while Narancia kicks the car in anger. Suddenly, Narancia's right shoe falls off. Meanwhile, Formaggio has used Little Feet to shrink himself and sneakily jumps into Narancia's pocket. From there, Formaggio spots the women's items Narancia had bought and easily deduces that Bucciarati is indeed guarding Trish. Narancia, shrinking at a slow pace, will soon be at a disadvantage.