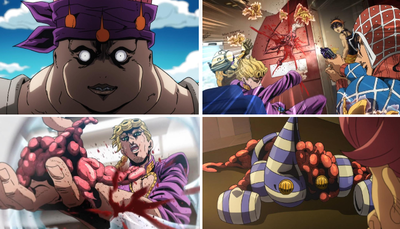 Notorious B.I.G (ノトーリアス・, Notōriasu Biggu)[1] is the twenty fourth episode of Golden Wind and the one hundred thirty seventh episode of the JoJo's Bizarre Adventure anime. The episode covers from Chapter 532 to Chapter 536 of the original manga.

Team Bucciarati decide to steal a plane and fly towards Sardinia to uncover the Boss' past. However, the operative Carne appears and inexplicably openly confronts the team on the tarmac, letting himself get killed as he summons his Stand Notorious B.I.G.

Team Bucciarati has arrived at the Venezia-Tessera Airport to take a plane to Sardinia, allowing them to fly rapidly to Sardinia, out of the reach of any Stand User.

While Abbacchio turns Moody Blues into a pilot and searches for a time when a pilot flew the plane and enters the IATA code to Sardinia, the whole team mobilizes to secure the area. In the cabin, Trish also notices Bucciarati's strange condition but stays silent in her puzzlement. Suddenly, Narancia spots a suspicious man advancing toward them. Mista warns him to keep away, but as the man keeps advancing, he shoots him once in the leg. The enemy suddenly summons his Stand but Mista immediately deploys Sex Pistols to shoot him in the heads several times, killing him on the spot. Giorno touches the corpse to sense if there is life in him and confirms the assailant's death. Everyone thus boards the plane, leaving the corpse behind them. Trish uses the occasion to speak to Bucciarati about their next course of action. Bucciarati infers that they can learn about the Boss on their island, counting on the fact that he didn't need to hide his identity back then. Trish thus mentions the Emerald Coast, the exact place where her mother met the Boss, giving the team a clue toward his identity.

Meanwhile, Giorno hears a faint creak coming from a cabinet. Suspicious, he tells Mista to ready his gun, to which Mista acts skeptical there could be any danger. Giorno opens the cabinet and sees that it is a mere fridge with ice cube trays. Thinking they were the source of the noise, Giorno apologizes but Mista then sees freshly cut fingers inside. The team is worried by the strange happenstance and thus, Bucciarati opens a zipper to throws the fridge out of the plane, confirming their safety. Giorno then spots numerous graffitis on the walls of the plane, only to realize they reflect his own thoughts, and eventually discovers that it is written that the previous assailant's Stand, Notorious B.I.G, is attacking them and consuming their flesh. Giorno finally notices that his whole right arm, which touched the enemy to check on him, is being consumed and turned into a mass of enemy flesh.

Giorno cuts his own hand with the window shards

He tries to chop it off, only for the flesh to react and attack Gold Experience. When Mista shoots off the infected arm, Giorno explains that their enemy has left behind his Stand to attack the team after his death. Indeed, four the of the Sex Pistols get consumed by the blob of flesh and Mista collapses to the ground. The enemy Stand then goes toward Narancia and likewise manages to grab on Aerosmith and wound Narancia. Bucciarati tells Trish to run, but the blob suddenly rushes toward Trish, causing Giorno to realize the Stand is reacting to movements. Using his remaining hand, Giorno pummels a window to bait the enemy onto it then cuts it off with the broken window shards, making the enemy fall from the plane.

Trish notices Giorno's brooch pulsating, which was transforming into a hand

Unfortunately, the enemy has still inflicted severe damage to the team, with Narancia and Mista being heavily wounded while Giorno has lost both hands, leaving him unable to use his powers again and heal the others. Shocked, Bucciarati can only contemplate the damage and bring his team to the cockpit to provide first aid. For her part, Trish remains alone in the cabin and thinks about her helplessness as everyone else is fighting to protect her. Suddenly, Trish realizes that Notorious B.I.G is still on the plane because it became the fastest object in the vicinity and thus it latched onto the vehicle. With the Stand forming right in front of her, Trish wants to take shelter but sees Giorno's brooch which is turning into a hand. Understanding that he made a backup hand, Trish must now protect Giorno's hand somehow to give the team a chance.

“
I was so afraid going into this episode - Trish had never spoken so much before! But I think I gave it everything I could, so I don't have any regrets. Most of all, though, I was happy that Trish was portrayed so beautifully. Her eyes are green, but there's a touch of pink in there, too! And the change in the ending credits also caught my eye.
”
—Sayaka Senbongi, Blu-Ray limited edition commentaries
“
I envisioned Trish's theme to be like a fashion collection. When I say fashion collection, I believe many people will picture cool models walking down the runway. From there, it's very easy to think of a female character. I make sure each piece guides the viewer's mind in this way.
”
—Yugo Kanno, Blu-Ray limited edition commentaries
“
1. Carne Appears

Daisuke Sakaguchi voices Carne, a member of the Boss's elite guard. Director Kimura states, “I know he doesn't have many lines, but I think his eeriness definitely came through." Kimura also focused on maximizing the horror and suspense by minimizing the use of music.

2. The Handwriting of a Local

Kimura reveals that he asked an Italian acquaintance of Chizuru Horikoshi, the coordinator in Italy, to do the writing that Giorno scribbles inside the plane. He explains that letters written by a Japanese person simply would not give off the same feeling as those written by a local, and that using a font would clash with subtitles.

Notorious B.I.G is an indestructible Stand that absorbs moving objects. The grotesque visuals are achieved by pasting capillaries as a layer of texture on top of tumorlike flesh. Kimura is satisfied with the outcome, stating, “I'm glad it turned out so gross!"

There is a brief pause as Trish breathes a sigh of relief, until Notorious B.I.G reappears on the window - a peak horror setup. Kimura says, “I'm sure people knew something was up with the negative space created by the window, but even if they anticipated it, I think they were surprised anyway. The sound is so loud, it gets me every time.”
”
—Yasuhiro Kimura, Blu-Ray limited edition commentaries