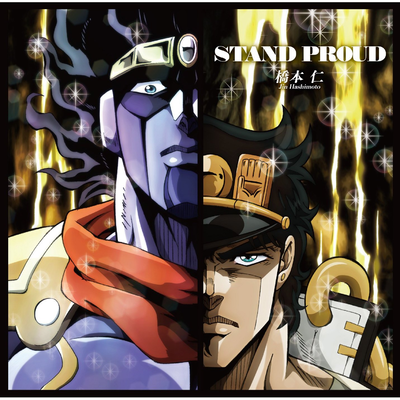 "STAND PROUD" is the first opening theme song of JoJo's Bizarre Adventure: Stardust Crusaders and the third overall opening theme in the JoJo's Bizarre Adventure anime. Animated by Studio Kamikaze Douga, the song is performed by Jin Hashimoto, with lyrics by Shoko Fujibayashi, composition by Takatuku Wakabayashi, and arrangement (and guitars) by ZENTA. The single was released for sale on April 23, 2014.

On the Oricon's Weekly Singles Charts, "Stand Proud" peaked at number 13 after being on the charts for 2 weeks.[2] On Billboard's Japan Hot 100, the song debuted and peaked at 11.[3] On Billboard's other charts in Japan, the song also performed well: number 3 on the Hot Animation[4] and Top Independent Albums and Singles charts,[5] and 2 on the Hot Singles Sales charts.[6]

The opening scene shows Jonathan posing for the camera and the younger Joseph attacking it with his Ripple overdrive, before showing Jotaro, initially turning his back on the screen, then turning around and pointing at the screen and summoning Star Platinum, who then unleashes his blazing fists. The Katakana characters "Jo" can be seen popping out at the screen as Star Platinum punches repeatedly before the logo is seen entirely.

The next scene after the logo shows the camera rising out of the ocean, staring at the full moon, referencing DIO's return. Five shooting stars, representing the five Crusaders, zooming into the skyline before crashing into the ground. A sixth shooting star is seen briefly at the far right, representing Iggy who is yet to be introduced. After the shooting stars come crashing down, the scene zooms into the darkness of DIO's mansion. The camera then flies up a staircase, briefly showing the bug that pinpointed his current location, zooming next to DIO's shady figure, emphasizing his Joestar birthmark, courtesy of Jonathan's body. DIO swipes at the camera causing the scene to change.

The camera zooms out from the eyes of Star Platinum, Jotaro keenly observing a Polaroid picture of DIO along with Avdol and Joseph. The scene changes as the party quintet (with Kakyoin and Polnareff) walks, reflecting the many places they'll be traveling, with Hol Horse being briefly seen. They are then seen riding camels in the desert, then all of them standing in a row side by side, Polnareff jumping excitedly and then all of them converging around a fire campfire, all before they watch the sunrise together.

A group of important characters, moments, and items are seen tangled in a web of red thorns coming from Holy's back, including Lisa Lisa, George II, Erina, Jonathan holding Dio's head, George I, and the Stone Mask, which then all flow into a crouching Jotaro. Jotaro then stands up sharply, with his Stand emerging from him.

A brief sketchy illustration of DIO is seen, in white over red, showing his shoulders and his neck with stitches. The camera then spins round him, the view briefly showing an x-ray view of the neck, emphasizing the break from his neck bone and spine showing where Jonathan's body ends and DIO begins. DIO flicks his hair and stares into the camera with an evil smirk, which then zooms into his eyes.

The Crusaders show off their Stand powers

The quintet then demonstrates their Stands, starting with Joseph, Avdol, Kakyoin, and Polnareff. In the background we see the plane Gray Fly attacked them on, Forever's Strength, the cable car Rubber Soul attacked Jotaro on, and finally the Sun blaring in the desert. They all then travel through a 3D-rendered scene with many writings, Katakana and English characters revolving around, namely ORA, JoJo, LUCKY LAND, and others. As Jotaro zooms in, Joseph emerges from the other end, using his Stand to travel, while Avdol, Polnareff, and Kakyoin demonstrate their Stand's powers one after the other.

A brief view of Jonathan closing his eyes (presumably from his death scene at the burning boat), Joseph opening his eyes as he ties the bandanna that came from his fallen friend Caesar around his head, and Jotaro looking up, is then seen, while the song chants "JOJO!" three times, presumably counting the three.

The intro has obvious 3DCG elements in use that are comparable to Sono Chi no Sadame, especially in the last parts, where the animation of Star Platinum and Jotaro is remarkably near-realistic. 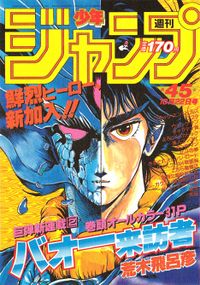 The "WRYYYYYYY" seen in the credits.

Other languages:
English • português do Brasil
Retrieved from "https://jojowiki.com/index.php?title=STAND_PROUD&oldid=681303"
Categories: