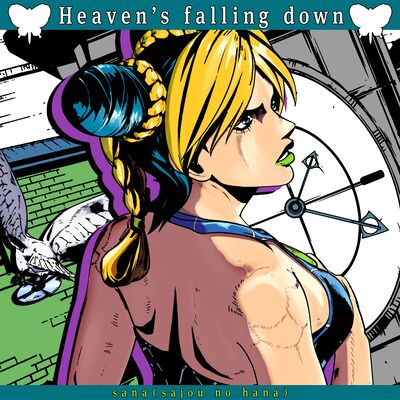 "Heaven's falling down" is the second opening theme song of JoJo's Bizarre Adventure: Stone Ocean and the eleventh overall opening theme of JoJo's Bizarre Adventure: The Animation as a whole. The song is performed by sana (sajou no hana), with lyrics by Shoko Fujibayashi and composition by Yugo Kanno. The opening animation sequence was produced by Kamikaze Douga.[4] Karen Aoki is the lyricist of the English version.[5]

Jolyne in the opening.

The opening begins with Jolyne standing in front of the night sky with her back turned. As she turns around, it transitions to her father Jotaro, who summons Star Platinum to do a punch barrage against The World. The World then cracks as light shines through it. Star Platinum punches through the rubble and it zooms out to reveal the Stand on the reflection of a DISC. Savage Garden carries the DISC away and flies off into the sky. The scene pans diagonally downward to Romeo's car in the rainstorm. It quickly shows the back of his car, then Romeo holding the bloodied hitchhiker, and then a side view of Jolyne standing in shock by the car.

The scene cross-dissolves into a black and white shot of Jotaro visiting Jolyne in the meeting room. Jolyne's stone pendant and hand appears on the center of the screen, transparent. The pendant falls onto her hand and she grasps it. More of Jolyne's body is revealed as it shows a frontal view of her holding the stone pendant with butterflies, her tattoo, and stars on her body. Meanwhile, the background transitions to Jotaro affected by Whitesnake's "Melt Your Heart" ability. Fully visible, the locket is open to reveal the photo of Jotaro and Jolyne's mother, which Jolyne tearfully looks at. Jotaro is shown sitting in bed, being treated by the Speedwagon Foundation. It fades back to Jolyne with a shot of her back and the Joestar Birthmark visible. She holds the pendant to her chest and turns around, looking at a light in the sky.

Jolyne and her companions.

The center of the screen flashes with the effect of a CRT TV turning on, opening up to reveal a transparent Ermes with Kiss's stickers overlaid on her. The background is black and white with Sports Maxx torturing a man by a car. Kiss appears behind Ermes as the background wipes to Gloria Costello's corpse in the sea. Kiss starts punching while Ermes screams, leaving the screen for a transparent Anasui with wheels on his body to emerge after. Anasui poses while the black and white background shows his ex-girlfriend in bed having an affair. The background shifts to wheels and various items that Anasui took apart when he was younger, while a transparent Diver Down appears behind him. Anasui then runs off the screen and a transparent Emporio appears with a baseball and baseball glove pattern on his body. He throws a baseball up while the background shows his mother's skeleton. A transparent Weather Report springs up with clouds and synoptic map symbols on his body and the background also covered in clouds. The scene distorts and squeezes downward with another flash, resembling a TV turning off.

Ermes, Emporio, Anasui, and Weather are now all by Jolyne's side, looking at the lone light in the sky. A close-up of Enrico Pucci's face zooms out to a frontal view with Whitesnake as well as silhouettes of DIO's sons (Ungalo, Rikiel, and Donatello Versus) in front of him. At Kennedy Space Center, a clock zooms outward and rotates upside down as Jolyne falls upward. She spins around and leaps toward a bright sky. The clouds shoot past to reveal the sun and Jolyne jumps downward with Stone Free punching. Ermes and Kiss do a diagonal kick downwards as Anasui and Weather each appear afterwards with their Stands. Emporio shoots his ghost gun with a panicked expression as cars and various other objects are floating in the background. The scene pans downward to Pucci looking up with DIO's shadow beneath him.

The scene fades to the wetlands where F.F. spins and flies up to the clouds. Finally, Jolyne confronts Pucci, as it shows her feet stepping in water. Pucci turns around as Whitesnake prepares to battle. Jolyne also readies herself and summons Stone Free. She and her Stand calmly walk forward before she starts running until her eyes are close up with her pupils filled with the flames of rage, similar to the ending of JoJo ~Sono Chi no Sadame~, and she punches the screen. The Stone Ocean logo is overlaid on the imprint of her punch and snail shells can be seen on the bottom.

In the final episode of Stone Ocean, the opening animation is significantly changed.

During the shots where Weather Report's silhouette is visible, the background is now revealed, showing the death of Perla Pucci.

Later, the frontal view of Pucci and DIO's sons has all three of the latter revealed. As the shot transitions to the courtyard, the clock is shown running at an accelerated pace. Suddenly, time stops and Jotaro Kujo appears with Star Platinum, the latter preparing to punch towards the screen. However, time quickly resumes, surprising Jotaro and Star Platinum. Before they can recover, Pucci appears to confront them.

The scene changes to the underground tunnel to Windknight's Lot seen at the very start of the opening animation of JoJo ~Sono Chi no Sadame~. Manga panels featuring each of the JoJos in chronological order appear in quick succession. Jolyne emerges from her own panel as the doors at the end of the tunnel open to the staircase of the Joestar Mansion. The scene spins to reveal Pucci posing alongside Made in Heaven in the place of the Statue of the Goddess of Love as time accelerates. A starry backdrop can be seen outside the mansion as it begins to crumble apart.

A shot of the JoJos posing in front of an abstract background, along with a thread connecting the Stone Mask, the Red Stone of Aja, the beetle Arrow and DIO's Bone, is shown. Jolyne extends her thread as the camera pans to her, and the crumbling staircase is shown once more. As the camera rotates and flies upwards, Jolyne and Pucci can be seen confronting each other alongside their respective Stands, reminiscent of Dio and Jonathan at the end of Sono Chi no Sadame as well as DIO and Jotaro during the tarot card sequence in STAND PROUD. Stone Free launches a punch toward Pucci as the camera flies up again, with the mansion now fully torn apart. Jolyne and Pucci fade into the background, and everything disappears in a flash of light both making references to JoJo ~Sono Chi no Sadame~ and STAND PROUD.

Finally, the season's logo appears with a brief flash in front of a shot of space. Jolyne's Stone Pendant appears from a spiral-shaped galaxy and falls into a layer of clouds. The camera pans beneath the clouds, revealing a road in the midst of a rainstorm as a car drives into the distance. The opening animation ends with a fade to white.

Destiny is mine 恐れ知っても
すべての未来途切れぬように
Shoot a thread of light

Destiny is mine, in spite of all my fear
So that the future may continue on its path
Shoot a thread of light

Heaven's falling down! And if the sky should fall
If God himself's gone mad, we'll
break right through his will
Destiny is mine, in spite of all my fear
So that the future may continue on its path
My fire will burn...

Fate is a choice that we all make every day
Don't let your wings of liberty be
enslaved and torn apart
(In the darkness)
I see glimmers of a path, and
now at last I seem to understand
Betting on all this is worth the price
Stay with me, let's move forward as one
Regardless of whether I survive

Heaven's falling down! Even if the world decays
The justice in my blood will never be erased
Destiny is mine, and I will not give in
As long as my heart beats, I'll radiate hope
Shoot a thread of light

Starlight from the depths is what I have received
The darker the sky becomes, the brighter it will shine
Destiny is mine, in spite of all my fear
So that the future may continue on its path
My fire will burn, the glimmer of my life itself
(Destiny's not invincible)

Creditless
Made in Heaven ver. - SO Ep38