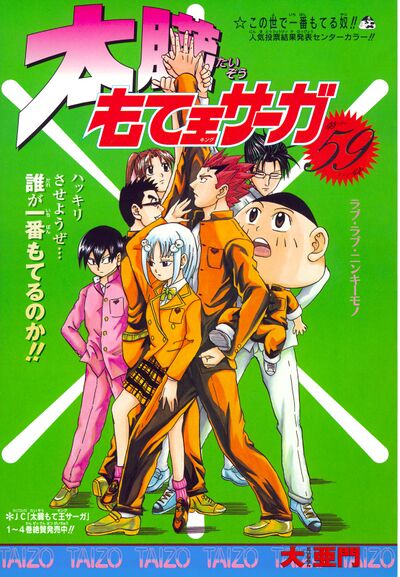 Official Website
Taizo Mote King Saga (太臓もてサーガ, Taizō Mote Kingu Sāga) is a parody gag manga written and illustrated by Amon Dai. It was serialized in Weekly Shonen Jump from July 25, 2005 to May 14, 2007. The manga spans eight volumes and eighty-seven chapters in total.

While the manga parodies several works from Weekly Shonen Jump and other magazines, the majority of references are about JoJo's Bizarre Adventure. The manga artist is a huge fan of JoJo and is friends with Hirohiko Araki.

The manga is also featured in the Nintendo DS game Jump Ultimate Stars.

In between reality and fantasy lies a world known only as the 'Space World'. From this world, a demon prince with a large triangle shaped head named Taizo Momote (百手 太臓, Momote Taizō) arrives at Doki Doki Private High School. His true identity is Baal Zebul and his objective is to marry all the women in the country and create a 'Harem Land'. However, with his looks and personality, there’s no way he could possibly find a girlfriend. The unrelenting Taizo recruits his close friends, Yu and the delinquent Komi Akutsu to his cause, and continues the search for suitable women.