Amphibia
In Toadcatcher, the second segment of the fourth episode of Amphibia Season 2, General Yunan poses multiple times when introducing and boasting about herself to people throughout the episode. While boasting about herself yet again as she confronts Captain Grime and Sasha Waybright, she briefly poses in reference to Josuke Higashikata's pose from the cover of WSJ 1994 Issue #1/Volume 36 and Jonathan Joestar’s pose from the cover of Volume 4. The references shown were notably added by Cassie Zwart, who was one of the storyboard artists for the segment.[1]

In Fixing Frobo, the first segment of the fifth episode of Season 3, Polly searches the internet for information on robotics. During the sequence various animes are referenced, a specific reference to JoJo is seen on a page with several images of robot frogs on it. One of the images has the caption "Menancing frogg robot - is this a jo-..." and the image shows a frog with the katakana for "Menacing" next to it and the "To Be Continued" arrow in the corner of the image.

The American Fast food Restaurant Arby's have numerous social media platforms where they create Cardboard art or use sauce packets to creatively design characters from Video Games or Manga as social media marketing advertisements, some JoJo characters have had this happen to them such as: Dio Brando,[2] Gyro Zeppeli,[3] Bread with lighter from the Black Sabbath arc,[4] Johnny Joestar,[5] Daniel J. D'Arby[6](from an AMA) & Will A. Zeppeli[7] 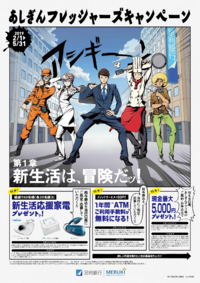 The 2019 Ashigin Fresher's Campaign from Ashikaga Bank featured an advertisement[8] of a group of people doing various poses from JoJo. From left to right the poses shown are:

The Twitter account for the Axe brand posted a gif of their deodorants labelled "JOJO" and "DIO" on November 1, 2021, with the caption "is this an axe reference?". The deodorants are approaching each other like Jotaro and DIO with a manga-styled background.

After the first twelve episodes of JoJo's Bizarre Adventure: Stone Ocean released on December 1, 2021, they posted the gif again in response to Kira Buckland announcing that she got her dream role as Jolyne Cujoh. The Twitter account continued to post the same gif as replies to several other tweets mentioning Part 6 that day. 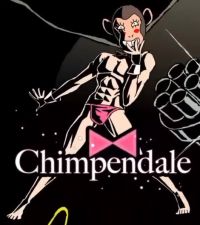 The ninth episode of the first season of Adult Swim's Ballmastrz: 9009 has one of the rivaling teams members striking one of Jonathan Joestar's iconic poses.

In the 8th episode of the second season, one of the team members has a hairstyle closely resembling Josuke's from Diamond is Unbreakable. There are also characters resembling Bruno Bucciarati and Giorno Giovanna from Golden Wind.

In the same episode, one of the teams does a dance mimicking the torture dance shown in Golden Wind Episode 7. 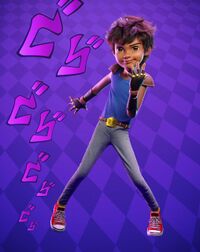 CB doing Jonathan's pose
The official Twitter account of the Brazilian retail chain Casas Bahia tweeted an image of its mascot, CB, dressed like Jonathan Joestar and replicating his pose in the cover of Volume 4.

Tunis shopkeeper's mask
In The Reparation of My Heart, the second episode of Castlevania Season 3, a shopkeeper in Tunis specializing in mystical objects Isaac speaks to can be seen cleaning or polishing a mask that looks similar to the Stone Mask. Notably, the mask is green with red and gold decor and lacks fangs.

Centaurworld
In It's Hidin' Time, the fifth episode of Centaurworld Season 1, when Wammawink briefly wakes up to protect the herd from the the Beartaur, her face changes to resemble that of Araki's style. Notably added by Charlie Bryant, who was one of the storyboard artists on the show.[9] It wasn't based on anything specific but rather as just the design inspiration as stated by Evan Palmer, the lead character designer for the show.[10]

In The Rift: Part 1, the ninth episode of Season 1, when Comfortable Doug was singing a song to Horse, he calls out Kale and Shar who briefly do Joseph Joestar & Caesar Anthonio Zeppeli's poses from Chapter 66. Notably the storyboard for this scene was also done by Charlie Bryant.[11]

After the first twelve episodes of Stone Ocean aired (December 10, 2021):

In an interview featured in Weekly Pro Wrestling No. 1490, a photo is shown of Japanese pro wrestler Go Shiozaki doing the pose of Noriaki Kakyoin from Chapter 123. When asked about the pose, he states "My muscles got in the way, I realized I couldn’t do a JoJo pose and was shocked."[12]

Government of Mexico
A public health organization in the State of San Luis Potosí, Mexico, posted images containing JoJo references to spread awareness of COVID-19 and vaccinations. The images were posted on their official Twitter, Facebook, and Instagram accounts.

The Ministery of Parks and Wildlife from the state of Nuevo León, Mexico, has also posted images containing JoJo references to inform the public about various topics such as wildlife awareness, holidays, parks and more. The images were posted on their official Facebook page.[13][14][15][16][17][18][19] 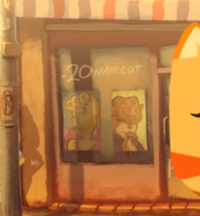 Posters of Giorno Giovanna and Josuke Higashikata
In the final scene of the animated film Hayop Ka! (also titled internationally as Hayop Ka! (You Son of a Bitch!), Hayop Ka! The Nimfa Dimaano Story, and You Animal!), the characters Nimfa Dimaano and Jerry go to a stew kiosk to eat together. At the barber shop behind them, posters of Giorno Giovanna and Josuke Higashikata, depicted as dogs, are seen on the windows.

Heroes
In the NBC drama Heroes, the character Hiro Nakamura is a fan of JoJo's Bizarre Adventure. In his blog, he states that he wants to "be like JoJo and Vaan and go on adventures" and that Part 3 is his favorite, especially the fights against the D'Arby brothers. One of his powers includes time manipulation, a gift shared with both Jotaro and DIO. In his blog he also mentions Joseph, Suzi Q and Boingo, whom he compares with Isaac Mendez. Isaac was an artist and comic book author whose works predicted the future just like Boingo's Thoth. Hiro later manages to stop time for more than 5 seconds and says that "JoJo was wrong" and posts on his blog under the pseudonym Jotaro Kujo. In the episode "Lizards", Hiro uses DIO & The World's battle cry "Muda Muda" during the Battle of Twelve Swords. He uses it again to taunt Daphne Millbrook while using his time manipulation ability to escape after taking her medal.

For the launch of the Japanese online fashion site "LA BOO," a short TV commercial was made featuring English model Cara Delevingne. In the commercial, she briefly does Jonathan Joestar's pose from the cover of Volume 4.[25]

La Cascara
La Cascara is a comedy-sketch show based in Panama, and are known to make numerous reference to pop culture. In a highlight reel of a carnival challenge segment, the hosts parody Diamond is Unbreakable's 3rd Opening Great Days, recreating the poses of the Part 4 cast over an instrumental of the "Unit's" version of the opening. Also in an episode of La Cascara's internet series "Quiero Ser Influencer" ("I Want to Be an Influencer"), one of the skits featured uses tracks from the Golden Wind soundtrack. Namely, "spensierato-rabbia" and "spiritoso" from Overture and Intermezzo respectively.

The Los Angeles Chargers, an American Football team competing in the National Football League, have referenced JoJo's Bizarre Adventure among other animated series in a trailer announcing their schedule for the 2022 season. A Houston Texans player is featured pointing his index towards the screen while a pink aura surrounds him and a giant bull appears behind him, referencing Jotaro Kujo and his Stand Star Platinum.[26]

My Little Pony: A New Generation
The design of the character, Sprout, takes light inspiration from the design of Dio Brando. His design was one of the contributions done by Lea Dabssi, who worked on the film as a freelance character designer/artist. In a panel she appeared on talking about her work on the film,[27] she thought about bad guys she liked when designing his initial hair design and was watching JoJo at the time, so she decided to go for a haircut similar to Dio's due to her liking of the character. This haircut and heavy eyebrow expressions are heavily present in Sprout's early model sheet. However, in the final design of the character, the front of his hair was cut for a more "slicked back" look.[28]

Real-life figures striking poses vastly similar to those featured in the series
As noted by JoJo's Posing School, figure skater Mao Asada and real-life runner Usain Bolt may have influenced or have been influenced by poses featured in JoJo's Bizarre Adventure.[29]

A species of tardigrade (water bear) discovered by Japanese scientists, Shinta Fujimoto and Katsumi Miyazaki, in 2013. The name is in reference to Love Deluxe as the scientists joked on how "it looked as if the Stand was controlling the creature's hair."[30][31]

In MISSION PAW: Royally Spooked, the first segment of the seventh episode of PAW Patrol Season 4, the pups visit Barkingburg after the Earl suspected a "spooky" activity in the castle. While the Princess is unbothered by the ghosts, it is revealed that her pet dog, Sweetie, is the mastermind behind these activities by using her chew toy in an attempt to become the Queen of Barkingburg.

Chasing after several "haunted" knight armors, the PAW Patrol deduces that someone remotely controls these knights. Skye, the lookout dog, notices a device on the knights' helmet, to which Ryder, the Patrol's leader, quickly traces back to Sweetie. The knights briefly pose in reference to Killer Queen’s pose from Chapter 362, Joseph Joestar & Caesar Anthonio Zeppeli's poses from Chapter 66, and Josuke Higashikata's pose from the cover of WSJ 1994 Issue #1/Volume 36.

Rise of the Teenage Mutant Ninja Turtles
In The Clothes Don't Make the Turtle, the second segment of the tenth episode of Rise of the Teenage Mutant Ninja Turtles Season 2, the brothers try on multiple clothes and take on fashion poses. At one point, Donatello does three poses reminiscent of Jotaro Kujo's trademark pointing pose, Giorno Giovanna's pose from Chapter 444, and Jonathan Joestar's pose from the cover of Volume 4. The second being the more direct visual reference. 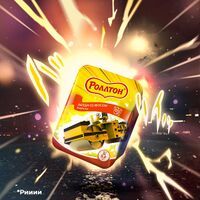 On April 22th 2021, they made another post that references the scene of DIO grabbing a road roller to use against Jotaro. The post states "Твой обеденный станд — ЗА-ВАР-КА! Wryyyy*!" which translates to "Your dining Stand - BO-IL-ED!" (Note: Rather than "BO-IL-ED", it says "ZA-VAR-KA", which is a play on words referencing "Za Warudo"). The packaging on the image states "Reference Flavored Noodles". 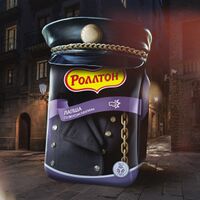 On December 2st 2021, they did another post, to commemorate with the release of Stone Ocean anime, text in said post states "Ролла-ролла-ролла!" which is a pun on company's name and Star Platinum famous Stand Cry - ORA ORA. Text on the packaging states "Platinum Flavored Noodles". 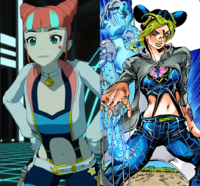 In Volume 7 of the animated web series RWBY, the design of the character Neon Katt was partly inspired by Jolyne Cujoh.[32] 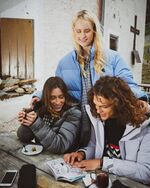 During a photo shoot for the famous Italian fashion brand Sonny Bono, one of the models, Giovanni Rossi, posed with JJL Volume 19. The model was specifically reading JJL Chapter 78.

In another photo shoot, the models are posed with JJL Volume 20, specifically reading JJL Chapter 81.[34]

The official TikTok account of the New York government posted a video of a woman pointing at herself with il vento d'oro as the background music and audio of Jotaro and DIO from JoJo's Bizarre Adventure: Stardust Crusaders saying each other's name.

The main caption for the video states that those who had gone to Anime NYC at the Javits Center from November 18–22 should get tested for COVID-19 as soon as possible.

Villainous
The fifth episode of Villainous Season 1 is titled BH's Bizarre Bad-Venture, referencing the titular name of the series. Within the episode there is several references to the series aswell.