Street Fighter (ストリートファイター, Sutorīto Faitā) is a popular fighting game series developed and published by Capcom. The first game in the series was released in 1987, followed by five other main series games, various spin-offs, crossovers, and numerous appearances in other media. Its best-selling 1991 release Street Fighter II is credited with establishing many of the conventions of the one-on-one fighting genre.

The series has made multiple references to JoJo's Bizarre Adventure, as well as taking inspiration from several of the designs used in the series. The most notable of which are the character designs for fighters Guile and Rose.

Street Fighter II: The World Warrior[a] was first released by Capcom for arcades in Japan on February 6, 1991. It is the second game in the main Street Fighter series and is is widely considered one of the most important and influential fighting games ever made, sparking the fighting game boom during the early 1990s.

The lead designer of Street Fighter II, Akira Nishitani, stated in an interview with Polygon that the concept of Dhalsim's ability to stretch his limbs comes from the Ripple Zoom Punch technique.[1] This was later reconfirmed in a comment by the series planner, Akira Yasuda, who said that Dhalsim's Zoom Punch was originally going to extend his arms in a "JoJo-style" effect early on in development.[2]

In an interview with producer Noritaka Funamizu, he reveals that Guile's overall appearance was modeled after Jean Pierre Polnareff from Stardust Crusaders.[3] Funamizu also explains that Guile's name originates from Polnareff's archenemy, J. Geil,[b] though this was said to be the result of a mix up from the development staff at the time.[3] Funamizu says, "We chose the names very carelessly. It started from like an Indian, a jungle savage, a Chinese female, and so on. Guile was the only one that we started to design after choosing the name. One of the people who saw the rough sketch for him said, 'Oh, this is Geil from JoJo's Bizarre Adventure, right?', so we thought, 'Alright then, let's go with Guile.' We looked it up afterward, and it turned out to be Polnareff (laughs)."[3]

According to Akira Yasuda, who was in charge of character designs at the time, early drafts of Guile included Polnareff's vertical, yet modest, hairstyle. But at the time the sprites were being made for Street Fighter II, the pixel artist jokingly stretched Guile's hair out to the sides. The team found it amusing and decided to give him "the always distinctive Stroheim look" instead.[2] During some point of development of Street Fighter II, Guile's iconic Sonic Boom was called the Divine Sandstorm (神砂嵐, Kamizuna Arashi). According to developer comments, this was possibly a reference to the character Wamuu, who also uses an attack of the same name.[4][5]

Character designer for Super Street Fighter II, Akiko Ohnishi, said that JoJo's Bizarre Adventure was the most popular manga among Capcom staff at the time.[6] Ohnishi also says "For a while now, every time we do a little survey for fun, JoJo always ends up #1 on the list for favorite manga. We also had a lot of people surprisingly answer the survey wanting to make a JoJo game."[6] 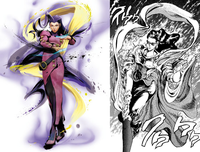 Rose's design was inspired by Lisa Lisa from Battle Tendency, as revealed in a video by Capcom UK.[7] Rose's outfit is almost identical to Lisa Lisa's, both sharing a similar fighting style that consists of channeling energy into their scarves. Soul Power in the case of Rose and Ripple in the case of Lisa Lisa. Additionally, both characters like to take baths.[f] Furthermore, in Capcom Fighting Evolution, Demitri's Midnight Bliss attack will turn Rose into a masked gondolier, reminiscent of Lisa Lisa's first appearance in the manga. There's also a rare chance that she'll turn into Enya the Hag, with sprites modified from the PlayStation port of JoJo's Venture.

In Street Fighter: Alpha 2, Rose's stage is set in Venice, where Joseph and Lisa Lisa first meet in JoJo. Rose's Soul Drain move in the series is also similar to the pose Lisa Lisa makes while putting the Ripple Breathing Mask on Joseph Joestar.[8]

In Super Street Fighter IV, aspects of Juri's design, such as her hair and chest wear, resemble Jolyne Cujoh from Stone Ocean. In addition, Juri has a spider motif and cleaves a butterfly in her official artwork; Jolyne has a butterfly motif, and her Stand, Stone Free, turns her body into threads and webs, in addition, she also has spiderweb-patterned clothes. Juri's "Hora Hora Hora!" battle cry when using her Fuharenjin attack is also similar to Jolyne's "Ora Ora Ora!". Coincidentally, Jolyne's voice actress in All Star Battle and Eyes of Heaven, Miyuki Sawashiro, shares voices with Cammy in Street Fighter IV and Street Fighter V. Juri's Japanese voice actress, Eri Kitamura, also voices Yasuho Hirose in both games.

In Ultra Street Fighter IV, Decapre has a taunt identical to Muhammad Avdol's "Yes! I am!" pose from Stardust Crusaders. It can be selected by picking Decapre's Personal Action 10 from the character select screen. When Decapre's Personal Action 9 is selected, she will say "Useless!" (無駄, Muda) while taunting, in reference to Dio Brando. Decapre is also voiced by Jolyne's voice actress, Miyuki Sawashiro.

Rose returns as a DLC fighter for the fifth season of Street Fighter V, released on April 19, 2021. In the Japanese version, Rose will say the line "Gimme a break!" (やれやれだわ, Yare yare dawa) during her taunt animation, which is a reference to Jolyne's catchphrase in Stone Ocean.[12] The English dub of the game replaces this line with "You reap what you sow." One of Rose's alternate colors for her default outfit is also directly based on Lisa Lisa. Her masked gondolier outfit inspired by Lisa Lisa also returns from the game Capcom Fighting Evolution as her "Nostalgia" costume. Rose's "Battle Outfit" also contains colors reminiscent of Joseph and Caesar from Battle Tendency. 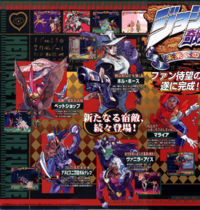 Artwork for JoJo's Bizarre Adventure: Heritage for the Future by Bengus.