An Off-Panel from issue #270
The 270th issue of the Archie's Sonic the Hedgehog comic book series, features an Off Panel comic strip in the back of the issue portraying Sonic and Knuckles as Kenshiro of Fist of the North Star and Jotaro respectively. Knuckles's quote is referencing Jotaro's quote said after DIO was killed by him at the end of Chapter 264, "There's only one reason you lost, DIO... just one simple reason. You pissed me off." The theme of the strip refers to the manliest of anime and concludes with Knuckles and Sonic engaging while shouting "OraOraOra" and "MudaMudaMuda".

American comic book Diesel was conceived as an Americanized version of episode 8 of the 1990s/2000s Stardust Crusaders OVA. 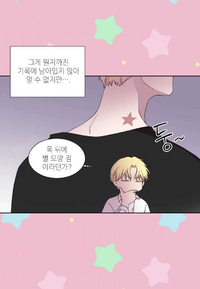 Golden Time (골든 타임) is a manhwa written by Ryu Hyang and illustrated by Heewon based on the South Korean novel of the same name. In Chapter 68 of the webtoon adaptation, the protagonist, Alex, searches for clues about the identity of Prince Eden. When he questions what "symbol" of the royal family Eden had, he wonders if it was a "star-shaped mole on the back of his neck". 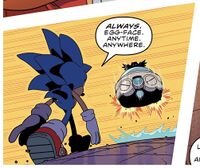 Sonic approaching Dr. Eggman
In the 32nd issue of the Sonic the Hedgehog comic book series published by IDW Publishing, the way that Sonic walks towards Dr. Eggman in a panel references the panel of DIO and Jotaro Kujo approaching each other in Chapter 256. 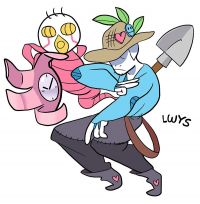 Babs stand
In Ep.29 of online webtoon Live with Yourself! by Shen, Tomo discovers Babs can pull objects into his timeline by observing them which results to said objects into aging rapidly, such as growing a tree from a seed. And when Todd came back, Tomo strikes this pose with Babs as a Stand. Also the episode is titled "Killer Queen", likely named after Yoshikage Kira's Stand, Killer Queen.

Oni's Rick and Morty
In the 22nd issue of the Rick and Morty comic book series published by Oni Press, Rick calls for reinforcements from The Citadel of Ricks and one of the Ricks depicted has his hair in the style of Josuke Higashikata's iconic pompadour and his jacket top is spread apart like Josuke's uniform as well. Rick also insults the officer's hairstyle like how various characters insulted Josuke's hair in Diamond is Unbreakable. 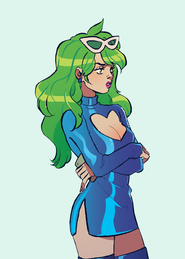 In the commentary of "Snotgirl Volume 2: California Screaming" Leslie Hung notes the influence of JoJo's Bizarre Adventure on the design of the Blue Dress.
It first appears just before the main protagonist, Lottie Person, and her friends go to San Diego. 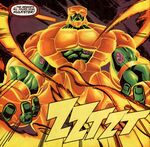 Hulk with The World armor
In X-Man Annual Vol 1 1998, the Hulk gains an armor that is likely based off of the design for DIO's Stand, The World.