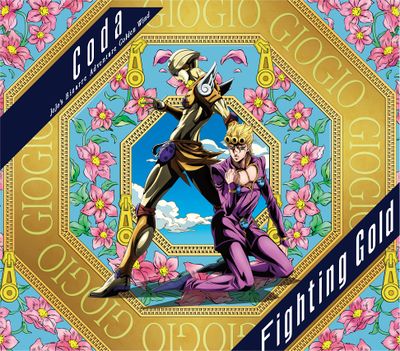 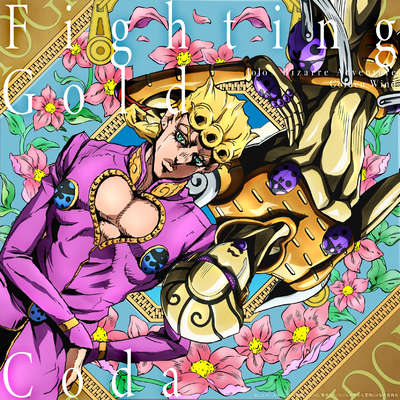 The full version of the song was released for purchase in download stores on October 13, 2018, while the CD single was released on November 14, 2018, along with access on popular song streaming platforms.[2]

The opening begins on a pedestal shot of a stone statue standing and posing dramatically (similar to the Volume 62 cover) on a rock, surrounded by a crimson scarf and a chain. Rolling Stones adopting the form of Bucciarati is behind its legs. Another shot follows of the chains being dragged upward by an Arrowhead. At the same time, flashes of "J", "O", and "JO" letters and symbols are displayed leading up to show title.

A bleeding hand appears, the blood dripping onto the floor before chains sprout forth from the puddles and surround Giorno, who keeps a defensive pose, but a determined gaze. Rose petals fly passed him, turning him into a silhouette of himself. The scene changes to Mista running into the light. Surrounded by the chains, the gunslinger draws his revolver, prepared to shoot. He too turns into a silhouette before the camera zooms into the barrel. The rifling suddenly transforms into a spiral of chains, in the middle of which Trish helplessly falls, her face apathetic. She fades into her silhouette before she falls out of the frame and the chains shatter. The scene is cut to a stone head of Abbacchio's former partner hitting the ground and turning into sand, the same sand which flows into and out of Abbacchio's hands. Abbacchio finds himself in a hourglass (framed by a pattern featured on a certain Stand), revealing his feet sinking into the sand while the camera pans to reveal the other side, his silhouetted double burdened by a mass of chains flowing upside-down into its hands from the hourglass' neck where the stream of sand would be coming in. The camera zooms towards his hands before multiple chains zoom forward passed the camera, revealing multiple interposed shots of Narancia framed inside chain links with different lighting until his silhouette is seen from the back staring away with the wind blowing. The scene cuts to a symmetrical shot of Fugo, the screen slit in a mirrored fashion as he turns to look at the camera before leaning back, before his silhouetted face emerges and lunges back. Cue another chain link transitioning into Bruno walking with resolve among the chains and a blocky wall to his right, as well as a small sun rotating behind his head, submerging him in shadow and creating his silhouette. Suddenly, the silhouettes fade to reveal the members of Team Bucciarati, who all summon their Stands. Cut to a black and white scene where a hand tries to grab the chains, but flinches back almost in pain as they turn green vines, returning the colors.

A series of attacking animations commences for each member of the gang: Giorno summons Gold Experience who pummels the camera, Mista shoots a bullet which Sex Pistols kicks into a different direction, Abbacchio uses Moody Blues to rewind the scene and change it into a red tunnel that resembles a gun's sight, Aerosmith comes in performing a loop and then shoots bullets identical to Bucciarati's spoon-like symbols into the camera before landing on Narancia's arms, Fugo summons Purple Haze who bumps its fists together and releases a thick cloud of its virus, and Bruno summons Sticky Fingers, who jumps out of a zipper and pummels the camera in turn.

Sticky Fingers opens a zipper revealing a panning shot of a figure in a fetal position draped in a cloth among floating rose petals. The figure is revealed to be Trish, under different coloring, who turns and looks into the light. Cut to a scene where all the members of the gang firmly gaze at the light before they all follow Bucciarati towards it, in the foreground, the vines revert back into chains and three of the six chains are broken as the path to the light opens up for the characters to thread on. The opening ends of a shot of Vento Aureo's symbol in the trademark checkered background of the series.

Other languages:
English • português do Brasil
Retrieved from "https://jojowiki.com/index.php?title=Fighting_Gold&oldid=764383"
Categories: