This article lists possible references made in popular series and by popular artists, to art or concepts defining to JoJo's Bizarre Adventure. Discussion of the legitimacy of these references can be found here.

Her election poster for the 4th election shows her doing Joseph Joestar's pose from the cover of Volume 6 and the poster itself replicating the visuals of the cover. 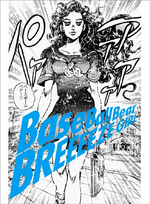 "Breeeeze Girl", the tenth single from the Japanese rock band Base Ball Bear, features an illustration of Yukako Yamagishi from Diamond is Unbreakable on the cover, as well as featuring a live-action version of the character for the music video. 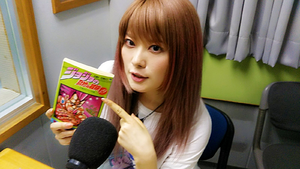 Fuki holding Volume 7 of Stardust Crusaders during a Radio Show

Fuki Commune is a Japanese singer, and lead vocalist for the J-Metal group, "Unlucky Morpheous",(former member of "LIGHT BRINGER"). Since childhood, Fuki has been a big fan of pop culture, including anime, manga, and most notably, JoJo's Bizarre Adventure. In a 2014 Interview, she spoke with fellow Japanese singer and voice actresss, Aya Hirano, about her love for the series. Diamond is Unbreakable is her "most favorite" Part.[1]

In 2015,[2] "Unlucky Morpheus", released their 5th EP, "Vampir". The 4th track, "Phantom Blood", is very likely a reference to the arc of the same name. Not only is the track featured on an album with a very gothic and vampire aesthetic, but when translated to english, one of the lyrics reads "I grabbed the mask;The time is to come", likely referring to Dio Brando rejecting his humanity upon being consumed by the Stone Mask.

HOTEI
Tomoyasu Hotei, known as HOTEI, is a Japanese musician who released the album GUITARHYTHM VI on May 29, 2019. In the music video for the song “Freedom In The Dark” from the album,[3] Harada Tadashi was the hair and make-up artist for it. In a twitter post by him, he confirms that Jolyne and Sandman are hidden within the video as the look for two of the models.[4]

Hello! Project
The idol groups of Hello! Project, like Angerme, consists of a few JoJo fans. Their girls strike JoJo poses on their blog and sometimes mix JoJo references into their dance choreography.

Kyary Pamyu Pamyu
Fashion model and musical artist Kyary Pamyu Pamyu often uses JoJo poses in performances. During an interview she has also mentioned having felt like a Stand user and has named one of her dogs JoJo. In her music video for "PONPONPON", she can be seen doing several different poses referencing different anime throughout the video with the last featuring aforementioned pose.

American hip hop artist and comedian Open Mike Eagle released on October 16, 2020 the album Anime, Trauma and Divorce which has two songs referencing the JoJo's Bizarre Adventure series. The first is "Bucciarati" and the second is "I'm a Joestar (Black Power Fantasy)". The song "I'm a Joestar" was also featured on Adult Swim's youtube channel with an official AMW with clips from JoJo's Bizarre Adventure: Golden Wind.

Open Mike Eagle discuss the link between the song and the series. "Bucciarati" deals with the themes of "into needing help, changing direction and doubling down on his art", while "I'm a Joestar" pays homage to the way the series regularly changes the settings and the characters, Open Mike Eagle citing how it allows him to better imagine himself in the world.[5]

Pocket Rocket
The rapper Cochise referenced the JoJo's Bizarre Adventure series in his song Pocket Rocket with the line: "I don't pop no Percs, JoJo on my shirt". The reference was confirmed by the artist himself during an interview with the web magazine Genius.com.[6]

RADIO FISH
J-pop group, RADIO FISH, featuring Atsuhiko Nakata and Shingo Fujimori of comedy duo Oriental Radio, performed their songs "PERFECT HUMAN" and "ULTRA TIGER" at the Halloween Music Festival 2016. The crew dressed up as characters from Parts 4-6 of JoJo with Fujimori as Narancia and Nakata as Yoshikage Kira.

Otaku idol Shoko Nakagawa (a.k.a. Shokotan) is a dedicated fan of the manga series and is known to do JoJo poses during interviews and live performances on stage, including breaking her tailbone when doing a Narancia pose on stage during a concert.[7] She often posts about her love of Jotaro Kujo and once interviewed Araki on a Japanese television show, which resulted in the creation of Love Note. She also did a live performance of Sono Chi no Sadame.

Luigi posing like Giorno
In the animated music video for the song "SMASH!," performed by American comedy supergroup Starbomb and animated by Studio Yotta, Luigi at some point does Dio's infamous "Wryyy" pose. Immediately after he is seen surrounded by Wii Fit Trainer, Rosalina, and Princess Zelda while mimicking Giorno Giovanna's famous "I have a dream!" pose.[8] Joel C, the director of the music video, has confirmed the references were intentional in his blog.[9]

Yuka Kashino (a.k.a. Kashiyuka) from Japanese electropop group Perfume often talks about her love for JoJo in the media and has struck JoJo pose with other members during photo ops. In addition, the choreography inspired by JoJo poses appear in Perfume’s music video for their 2010 single "Natural ni Koishite".