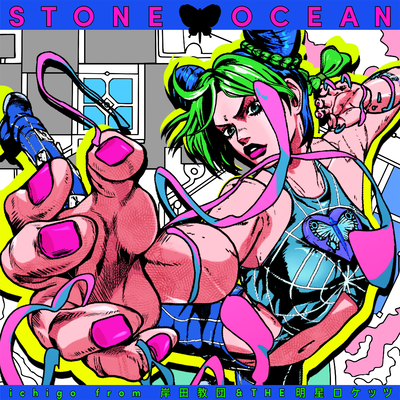 Stone Ocean
For other usages of the term "Stone Ocean", see the disambiguation page.

"STONE OCEAN" is the first opening theme song of JoJo's Bizarre Adventure: Stone Ocean and the tenth overall opening theme of the series' TV anime adaptation. It is animated by Kamikaze Douga and performed by ichigo from Kisida Kyodan & The Akebosi Rockets. Its lyrics are by Shoko Fujibayashi, composition by Takahiro Kawata, and arrangement by Masaki Iehara.

The opening starts on a tracking shot of a white line on a road until the camera tilts upward to reveal that it is a thread coming out of the back of an armored van. The view then quickly enters the van, following the thread and shows Jolyne Cujoh and Ermes Costello sitting inside with a number of anonymous prisoners and guards. The view then quickly exits the van through the windshield and elevates itself to show a bird's-eye view of Green Dolphin Street Prison as the series title appears.

The thread reappears as several screens flash in quick succession to transition into a view of Jolyne's cell, in which she is seen arguing with her cellmate as the camera rotates around her. After another quick transition, Jolyne can be seen in the middle of a hallway while being shrunken and with several guards shooting at her from behind a barred gate. The camera flies under the opposite gate, with the Stone Pendant being briefly seen before the screen is filled with sprites and motifs reminiscent of traditional comic book art.

The camera zooms through the sprites and then moves through a second hallway filled with various guards and inmates of Green Dolphin Street who morph from featureless silhouettes to fully visible and animated characters. As the camera reaches the end of the hallway, F.F. and Ermes appear and take a pose alongside Jolyne. The background also morphs to transport the trio inside of the ghost music room, showing Weather Report, Narciso Anasui and Emporio Alnino besides the three women. A quick wipe happens, and the scene advances forward across a piano, showing a number of objects from previous parts falling on its keys. The camera then enters a drain, transitioning into a scene of F.F. playing catch with Ermes and Jolyne in the prison courtyard as bank notes, basketballs and baseballs rain down from the sky. The scene suddenly zooms into the window of a building, transitioning into the meeting room where Jolyne and Jotaro Kujo stand in the middle of a rain. The camera flies across the room, rotating a full 180 degrees before showing a brief shot of the star on the back of Jotaro's coat.

The background fades to black, leaving only the star on the screen, then the camera quickly flies backwards through a grate that Jotaro and Jolyne peer at. The opening then transitions into a view of the Stone Pendant tied to a DISC and then a fist closes over it. Jolyne is seen kneeling in the water with a night sky filled with stars, clutching her fists until she breaks free from her handcuffs, with a determined expression in her eyes. Jolyne then stands up and summons Stone Free.

After a quick wipe made with butterflies, the view shifts to the main trio showing off their abilities throughout abstract backgrounds. Ermes puts a sticker on a giant bullet, duplicating it as she runs on it and jumps from one bullet to the other. F.F. then jumps into view accompanied by several planktons before quickly aiming and shooting with her finger. Finally, Jolyne swings by before striking a pose. The trio can then be seen running forward on bridges made of strings, and the scene shifts to a view of Weather Report and Jolyne fighting an unknown foe shooting at them in a large room. Next, Jolyne runs on the water as dozens of planktons jump out of the water. The plankton turn into DISCs, allowing a transition into a hangar full of DISCs.

The opening then transitions back to the night sky scene. Visions of the key items of the series flash in quick succession as the white thread forms a star, transitioning into the Joestar Birthmark on Jolyne's shoulder. As the camera rotates, Jolyne marches forward while her father can be seen from the back, standing in the background. Jolyne reaches a wall of bars and melancholically looks at the sky but her sad look turns into a determined expression. The opening ends with another bird's eye view of the prison as a bright blue butterfly ascends into the sky.

The opening animation incorporates a number of hidden nods to the JoJo's Bizarre Adventure series as a whole.