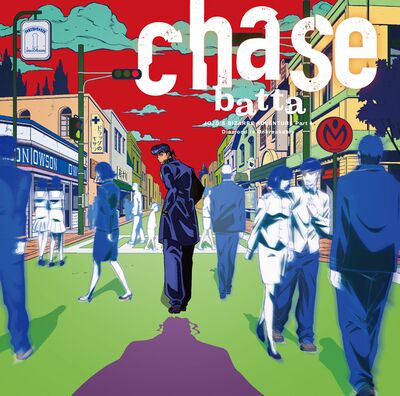 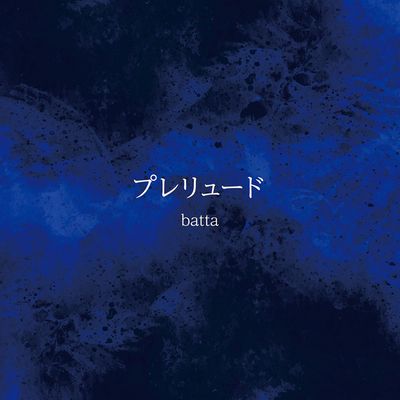 "chase" is the second opening theme song of JoJo's Bizarre Adventure: Diamond is Unbreakable and the sixth overall opening theme of the JoJo's Bizarre Adventure TV anime. The song is performed and arranged by the group batta,[4] consisting of Tomomori Mano, Asato Shinohara, Takeshi Hoshino, and Tatsu Hoshino, who wrote the lyrics. The single was released on July 27, 2016.

An English version of "chase" was included as a bonus track on the band's 3rd album Prelude, released on October 17, 2018.[3]

The opening begins with a grey, drab visual of a heart with an anchor in the middle bearing the name "JoJo". Thorns from Hermit Purple wrap around the heart as a purple pulse monitor flashes across the screen. The pulse monitor then becomes erratic as if a heart attack, turning into electricity as the scene transitions into a cul-de-sac with the main cast standing in the middle while the camera rotates around them. The scene flashes to cans of soup in a freezer bearing the hands of several women while a superimposed "JoJo" is plastered across the image. The scene flashes back to the cast, zooming in on Josuke as he strikes a pose before rotating to feature Okuyasu also posing. The scene then flashes to an image of several suitcases with destination stickers of countries from around the world, one of which being Egypt where the arrow came from, beneath them a puddle of blood and behind them a cracked door with light shining through. The scene then rotates to feature Joseph Joestar holding baby Shizuka before rotating again to feature Jotaro posing.

The scene swiftly transitions to a photograph of Koichi happily sitting next to all of his friends, along with, Toshikazu, Tamami, and Shigechi—all striking poses and pointing at the sky, except for Yukako, who is staring happily at Koichi, and Rohan, who is pointing towards where Reimi's alley should be. The camera zooms out to feature several other Polaroid photos all lying on the ground, tire marks covering them. The Killer's hand suddenly appears on all of the photos at once and smashes down on them before distorting into a skull. The photographs all erupt into flames and disintegrate as the main title appears from the fire.

The title then turns into multiple sticky notes which each of the title's hiragana letters on them. These then scatter as the scene transitions to a field with Okuyasu and Toshikazu looking at Shigechi feeding a flock of pigeons. Suddenly, a finger appears on screen as the Killer violently trims his nail; with the reflections of Aya Tsuji, Shigechi and Reimi appearing in the fingernail's reflection. The scene quickly shifts back to Shigechi and the others as the pigeons become spooked and fly off. The position of the scissors was lined up to where Shigechi's neck is, foreshadowing his fate. 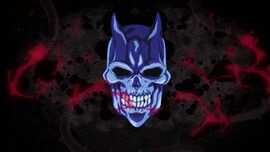 After a transition, Rohan appears as he sketches the birds flying off into the distance and near electrical pillars from the sanctity of his home. Rohan then looks up from his notebook and out the window with a solemn gaze. A single pigeon transitions the next scene, as the focus shifts to Toshikazu and Tamami arguing on the sidewalk while Josuke and Koichi chat with Okuyasu. On the screen, Bug-Eaten and the other rats appear above them before slowly panning to the anchor within the heart from earlier. The heart takes up the scene as everything else fades into black. Suddenly, a decrepit hand with long fingernails reaches out and clutches the heart in its hand, causing the thorns surrounding it to shatter as the background turns red. Out of nowhere, the skull of Sheer Heart Attack appears and eats the heart and hand with a single chomp; causing the thorns to spurt blood as if they were arteries. Out of darkness appears the newly evolved Echoes ACT3; shrouded in darkness (up until it Episode 24 after its full reveal) its eyes glowing, with the silhouettes of Koichi and Hazamada changed into books in the background. Several green soundwaves appear from Echoes' body as this transitions into Love Deluxe and Cinderella side-by-side. Several arrows shoot down from above as both Stands each transform into their respective users, Yukako and Aya. The camera zooms out on the two sitting women as Aya clutches Yukako's face, a thin line of white rectangles separating them while blue lights shine from above.

The camera unexpectedly zooms back in, now showing the white rectangles as windows with Reimi holding hands with a young Rohan. The hands disappear as the scene distorts into several windows which now show the Killer holding one of the severed hands of his "girlfriends". The hands phase away as an old man holding a single bleeding arrow menacingly appears inside pictures, simply motionless. The man disappears as the camera zooms into where he once was, now traveling through Reimi's alley as the spirits of Arnold and Reimi appear, crying out in apparent pain. The camera zooms behind her as thick, sketchy lines depict the skull of Killer Queen briefly transforming into several black Arrows. 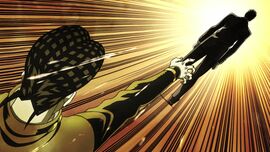 The Arrows all fire out at Jotaro, Okuyasu, Koichi, and their Stands, barely missing them as they prepare for battle. The scene pans slowly over to Josuke, who with a furious look on his face, summons Crazy Diamond and shatters the Arrows into several pieces. As Crazy Diamond lets out a roar, shattering the remaining Arrows, Josuke breaks through as he desperately reaches out to catch the murderous silhouette of the Killer. The camera zooms closer in an attempt to reveal the Killer's face as he merely turns his head towards Josuke, revealing a cold, blue feline-like eye.

Other languages:
English • português do Brasil
Retrieved from "https://jojowiki.com/index.php?title=Chase&oldid=743513"
Categories: