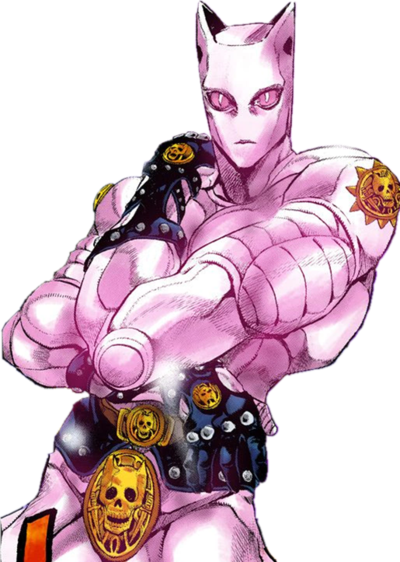 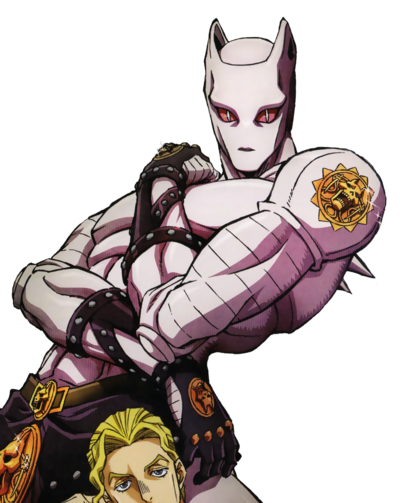 Destructive Power
A
Speed
B
Range
D
Stamina
B
Precision
B
Developmental Potential
A
A
B
C
D
E
A: Very Good
B: Good
C: Average
D: Poor
E: Very Poor
“
Killer Queen can erase you at any time. For you see, Killer Queen can turn anything it touches into a bomb.
”
—Yoshikage Kira, Chapter 345: Yoshikage Kira Just Wants to Live Quietly, Part 4

Killer Queen (キラークイーン, Kirā Kuīn) is the Stand of Yoshikage Kira, featured in the fourth part of the JoJo's Bizarre Adventure series, Diamond is Unbreakable.

Killer Queen is a muscled humanoid Stand with cat-like features. Its abilities all revolve around bombs, whose blasts are capable of atomizing people. 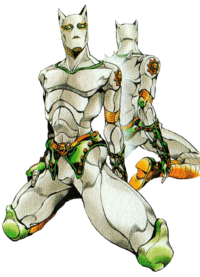 Killer Queen is a visibly muscular humanoid Stand about as tall as Kira himself, light in color overall.

Killer Queen's powers revolve around setting up different kinds of bombs that can annihilate Kira's enemies in one blast, making it a very dangerous Stand to face. Not only are the bombs powerful, but Kira is also able to deploy two bombs initially, then eventually three kinds of bombs with different strengths, giving the serial killer a large array of options when dealing with his foes.

Killer Queen's Primary Bomb is to charge any object, inanimate or not, as a bomb simply by touching it.

Matching Kira's desire to keep his murderous life a secret, anyone detonated by Killer Queen is completely incinerated with their body, their clothes and any personal belongings they were carrying being completely vaporized at the atomic level, leaving no trace;[13][14] however, it is possible for a victim to survive an explosion if it comes from a nearby object instead of their own body, though this is a rare occurrence.[15] In one instance, Kira is seen able to vaporize a hand slowly instead of it exploding immediately.[16] Kira can also control the size and strength of Killer Queen's explosions[17][18][19] as well as what parts of a victim's body are vaporized, usually resulting in Kira destroying his victim's body except for their right hand to keep.[20] The effects of Kira's explosions on their surroundings vary; they generally do not damage nearby walls and floors,[13] but during Kira's battle with Josuke, they could potentially affect nearby objects and Kira himself, though this may be due to Stray Cat's own Stand power being combined with Kira's.[21]

There are several limitations to this ability. First, if Kira or Killer Queen cannot press their thumb against their index finger's middle phalanx to trigger the bomb's detonation, the target cannot blow up.[22] In addition, since this power is similar to incendiary bombs, it also cannot induce their explosions if there is no air, as demonstrated by Stray Cat disabling a bomb by creating a vacuum around it.[23] Finally, Killer Queen can only charge one object at a time.[24] 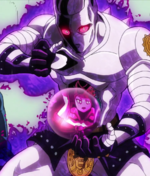 During the final battle, Kira places Stray Cat (ストレイ・キャット, Sutorei Kyatto) in Killer Queen's hollow abdomen.[4] Using Killer Queen's Primary Bomb to charge Stray Cat's condensed air bubbles, Kira is able to create virtually invisible air bombs (空気弾, Kūki-dan) to use as projectiles.[25] These can be detonated automatically through contact[26] or manually through Killer Queen's switch.[27] They can also not be deflated, as Killer Queen's ability stabilizes them.[28] Despite being unable to see the air bombs himself, Kira is skilled in determining their trajectory using basic mathematical skills;[29] additionally, Yoshihiro Kira can verbally help him direct his aim by flitting about the battlefield in his photograph form.[30]

Sheer Heart Attack is Killer Queen's secondary bomb. It is an autonomous entity that detaches from Killer Queen's left hand. It is a high range, mobile, heat-seeking bomb that is extremely durable and leaves massive explosions in its wake.

Araki includes Killer Queen's whole design among his favorite things to draw.[31] From the Stands up to Part 5, he considers Killer Queen his second favorite in terms of design, below Gold Experience and above Echoes. The stand was designed to incorporate both the darkness surrounding Kira and the sort of eeriness a cat possesses.[32] At the 2019 Lucca Comics festival, Araki said that Killer Queen was his favorite Stand design-wise.