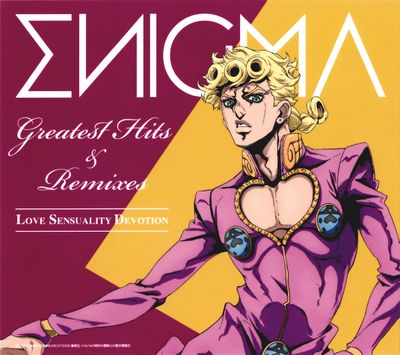 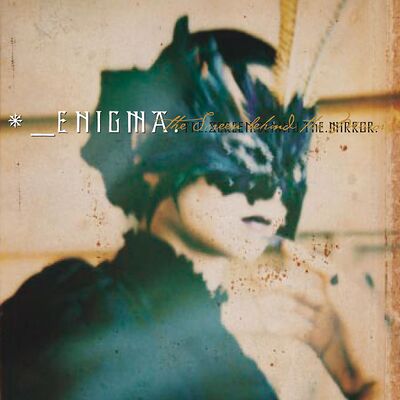 The Screen Behind the Mirror

"Modern Crusaders" is a 2000 song by the German experimental music project Enigma from their fourth studio album The Screen Behind the Mirror. It is used as the second ending theme for JoJo's Bizarre Adventure: Golden Wind.

The ending sequence vertically pans up a pillar decorated with statues of Stands encountered in the series, which changes as more enemies and allies are met as the series progresses (the original sequence did not feature Notorious B.I.G, Spice Girl, Metallica, Green Day, Oasis or Chariot Requiem but following their introduction they were added to the ending sequence). During the entire sequence, the scenery is plunged into colored ambient lighting that constantly shifts color and flakes of dust constantly fall from above. The frame is also flanked by two sets of patterns made up of tessellated triangles.

The beginning of the sequence pans up the column featuring the enemy Stands encountered thus far, with a sphere representing Rolling Stones at the base of the pillar, with statues of other Stands on the pillar itself: Black Sabbath, Soft Machine, Kraft Work, Little Feet, Man in the Mirror, Mister President, Beach Boy, The Grateful Dead, Baby Face, White Album, Clash, Talking Head, Notorious B.I.G, Metallica, Green Day and Oasis.

The procession of enemy Stands ends, with a part of the pillar crowned by four Arrows and a ladybug brooch, before moving onto the Stands of the heroes doing battle with the boss. Purple Haze, Moody Blues, Aerosmith, Chariot Requiem, Sticky Fingers and King Crimson, with Sticky Fingers and King Crimson, depicted as fighting against each other as the Sex Pistols watch. Spice Girl is seen being held by King Crimson, pointing up towards Gold Experience as it poses at the top of the pillar in the center of a bas-relief resembling rays of light.

The final episode uses a special version of the ending in which Rolling Stones fully takes the form of Bruno Bucciarati and Gold Experience is replaced by a statue of Gold Experience Requiem with its arms outstretched.

Don't look back, the time has come
All the pain turns into love
We're not submissive, we're not aggressive
But they think we can't defend

STAND UP, JOIN US, MODERN CRUSADERS ALIVE
We have the power to face the future
'Cause we are the fighters
Just fighting for our rights

They're accusing, like always without knowing
What is just fiction or what is the truth
They have no mission, they have no passion
But they dare to tell us what's bad and what's good!

STAND UP, JOIN US, MODERN CRUSADERS ALIVE
We have the power to face the future
'Cause we are the fighters
Just fighting for our rights

driven on
and weighted down,
always enslaved.

since Fate
strikes down the strong,
everyone weep with me!

first oppresses
and then soothes
playing with mental clarity;
poverty
and power
everyone weep with me!