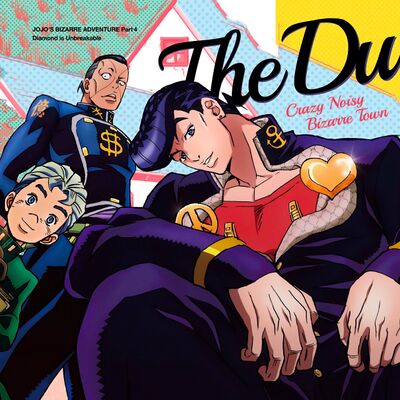 "Crazy Noisy Bizarre Town" is the first opening theme song of Diamond is Unbreakable and the fifth overall opening theme of the JoJo's Bizarre Adventure anime. The song is performed by the group THE DU, consisting of Jun Shirota, Taisuke Wada and Jeity, with lyrics by Saori Kodama, composition by Kazuso Oda (Coda), and arrangement by MACARONI☆. The single was released on April 27, 2016.

On a darkly lit stage littered with "JoJo" signs and illuminated by multiple multi-colored lights, Josuke Higashikata, Koichi Hirose, Okuyasu Nijimura and Jotaro Kujo all stand together as the scene pans around them. Colorful pop-art portraits of the foursome flash by before cutting back to the stage as all four reach their hands up towards the ceiling as confetti flies about, with their poses highly reminiscent of the widely-recognizable Saturday Night Fever pose.

The scenery then changes shots of Morioh as silhouettes of all the Stand users in Morioh flash by at blinding speed. The scene then changes to an aerial view of Japan as the camera zooms into Morioh, with the view quickly descending through clouds and towards the ground. The logo then appears, flashing before breaking into many pieces. 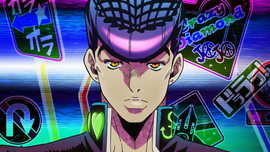 The scenery changes yet again to Josuke walking on the street surrounded by people and street signs, which reference different Stands and plot points throughout the Part. The scene zooms onto Josuke who turns to the left as the scene changes to focus on Koichi. Koichi, surrounded by green and purple backdrops, looks around nervously as the scene zooms out: revealing his shadow to be that of Yukako Yamagishi gazing at him. The scene then switches to Okuyasu, who is knelt on the ground next to a soft-drink can. Once again, the scene zooms out to reveal Okuyasu's shadow as that of his brother, Keicho Nijimura aiming the Bow and Arrow before morphing into their father. However, unlike with Koichi, these shadowing figures disappear as Okuyasu slowly stands up before kicking the can which leads into a transition of a picture of Josuke on the can, possibly referencing the battle with Atom Heart Father.

The can rotates clockwise before transitioning into Josuke walking down his home street as disco lights illuminate him. Josuke strikes a pose, leading to Crazy Diamond appearing from his side as diamond-sparkles fill the scene. The scenery changes to Koichi running down a separate street with disco lights shining on the pavement. Koichi also strikes a pose, yet his Stand does not appear which references the fact he has not yet obtained his Stand by this point. Colorful ripples then change the scenery to feature Okuyasu strolling down a sidewalk. He then leans backwards, which prompts The Hand to appear from his opposite side; mirroring the pose he's in. The scene zooms into them both before breaking apart to reveal Jotaro standing by himself. Jotaro then strikes his trademark pointing pose, with Star Platinum appearing from his side, mimicking him. As multiple colorful ripples dot across the scene, the scenery suddenly pans out and upwards towards the sky. 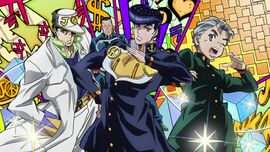 The scene transitions into a map of Morioh, with Josuke, Koichi, Okuyasu, Toshikazu Hazamada, Tamami Kobayashi, Yukako and Tonio Trussardi all dancing along to the song. Jotaro himself appears last and smiles rather than dance as the scene then changes to feature only Crazy Diamond. Crazy Diamond punches the background, destroying it and reforming it as an entirely new background. The Hand then appears and uses its power to erase the background completely.

The scenery then changes to feature Josuke, Okuyasu, and Koichi all standing on the streets on Morioh; staring at a building complex. Josuke then turns around with a stoic expression on his face as the others turn with him. The scene then pans out as the trio gaze upon the town of Morioh in its entirety from atop a hill. The scene then focuses towards the sky itself before immediately cutting to Josuke, Okuyasu, Koichi and Jotaro all striking a pose in front of a colorful background.

The Opening, starting from Toshikazu Hazamada (Surface) and onwards includes Koichi's Stand, Echoes. Koichi now poses with Echoes ACT 1, which produces the word MYSTERY, in green. Colorful ripples (or the word created by Echoes, after "Koichi Hirose (Echoes)") then change the scenery to feature Okuyasu strolling down a sidewalk. Later on, after The Hand appears to erase the screen, Echoes ACT1 manifests itself on the wall behind The Hand.

Other languages:
English • português do Brasil
Retrieved from "https://jojowiki.com/index.php?title=Crazy_Noisy_Bizarre_Town&oldid=775514"
Categories: