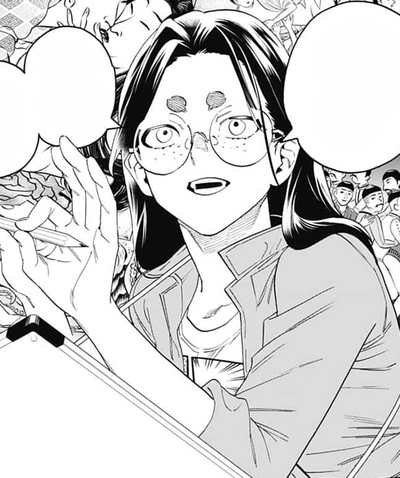 Stabbing her landlord with a knife

Fujiko Fujiyama is a young 24-year old woman of Japanese descent although she was raised in America. She is a woman with a svelte and slighty curvy silhouette of medium height and long straight dark hair, but having a plain face. Fujiko's most distinctive facial feature are her eyebrows which are ovoid in shape with a small pointed tip, reminiscent of hikimayu. The outline of her eyes is emphasized as if she wore eyeliner or is tired. She also has freckles.

Fujiko wears large round eyeglasses and plain T-shirt with an imprint of comic-book panels on her chest under a plain G.D. Street Jail inmate's jacket, a pair of jeans and sneakers. Finally, Fujiko seems to constantly have a sketch board and a pencil with her at all times, keeping her sketch board strapped around her shoulders so that she can draw even when walking.

Fujiko Fujiyama is an awkward woman with a passion for drawing who takes a clear interest in Jolyne Cujoh.

Fujiko is a withdrawn woman who prefers to stay isolated from others in order to draw. According to Whitesnake, she loved drawing ever since she was a kid and she developed her passion into an unhealthy obsession. Whitesnake states that if one tries to stop her, then she becomes extremely violent and in fact, Fujiko was convicted for having stabbed her landlord who told her, in good faith, to go study instead of "wasting her time with drawing".

Fujiko becomes extremely attracted to Jolyne over the course of the story. She begins by being merely interested in Jolyne because she's heard a story about Jolyne being caught touching herself (and because of Whitesnake's command) and thus feels that she is "honest" about her desires. When she meets Jolyne, Fujiko also appreciates Jolyne's physical beauty, focusing on details such as her lips to her chest. However, it is when Jolyne praises Fujiko's art and tells about its soothing effects that Fujiko started feeling truly infatuated with her. Fujiko then begins to obsessively begin drawing Jolyne and her attraction becomes adulation as she starts to draw Jolyne as the main subject of what Whitesnake appraises as "religious art". Whitesnake feels forced to take back Fujiko's Stand and also her memories of Jolyne. In the end, Fujiko thus forgets about Jolyne and it is as if she never existed in Jolyne's life.

Whitesnake has given Fujiko the Stand Bad Romance. It allows Fujiko to affect the mental state of those she gives a drawing to. Fujiko mostly exploits its effect to retain a steady flow of commissions.

“
Nude is $100. Pairings are $200. Twice the people means twice the cost. For each additional person, I'll charge an extra fee of $100. And if you want me to draw something like "Spider-Man x Deadpool", like that girl over there, I'll have to charge you extra for all the necessary reference materials.
”
—Fujiko Fujiyama 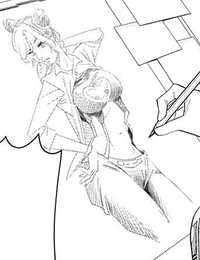 A sketch of Jolyne by Fujiko

Fujiko is a talented and accomplished artist who has kept drawing on a regular basis since her childhood. She is thus able to draw rather high-quality art with a pencil and specializes in erotica (ergo the human body). Her art is good enough to be popular among the inmates of Green Dolphin Street Prison. When she gets excited by Jolyne, Fujiko starts to draw a large quantity of sketches of Jolyne rapidly.

Fujiko Fujiyama was born in Japan around the year 1987,[1] but then raised in the United States. Ever since she was a child, she had a passion for drawing which grew into an unhealthy obsession. At one point, she stabbed her landlord who told her to stop wasting time drawing and go to the university. Fujiko was then convicted and put in Green Dolphin Street Prison.

In prison, Fujiko makes a living drawing and selling erotica to her fellow prisoners and becomes rather popular. Enrico Pucci notices her talent and grants her the Stand Bad Romance, knowing Fujiko would have a good affinity with it. It allows Fujiko to control the mental state of those she gives a drawing to. With this ability, Fujiko becomes even more popular within the prison.

Fujiko hears about Jolyne Cujoh and how she "touched herself" alone in her cell. Interested, Fujiko approaches her and gives her a sketch she's made. Jolyne makes fun of her art's exaggerated features but buys and praises Fujiko's art. Fujiko is actually touched and excited by Jolyne's compliment. She goes to the prison chapel and begins drawing Jolyne repeatedly. Unbeknownst to her, Fujiko is observed by Enrico Pucci and Whitesnake. They notice that she's not merely drawing erotica anymore but religious art out of adulation for Jolyne. Offended that Fujiko would draw Jolyne like this and also fearful that her art might boost Jolyne's mental strength, Pucci takes away Fujiko's Stand and her memories of Jolyne.

Fujiko forgets about Jolyne and returns to being an amateur erotica artist. The narration states that everyone believes she never existed and the number of Fujiko's customers decreases after she loses her Stand.