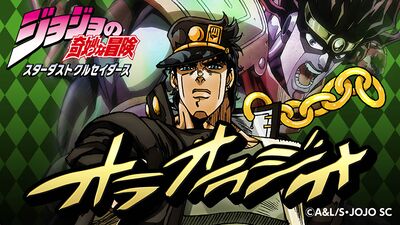 ORAORAdio (オラオラジオ) was a weekly web radio program hosted by Daisuke Ono, Jotaro Kujo's voice actor from the JoJo's Bizarre Adventure: Stardust Crusaders TV anime. Each session featured a guest appearance by the staff of David Production, as well as the cast of the show (often coinciding with their appearance in the anime). Topics vary, though are usually related to the TV anime.

Most sessions as well as five bonus episodes were published on six discs by Tablier Communications from September 24, 2014 to January 27, 2016. An additional bonus episode, ORAORAdio ~Inheritance~ (オラオラジオ！〜継承〜), was broadcasted on April 1, 2016. As a guest, it had Yuki Ono, Josuke Higashikata's voice actor from the following anime season, inheriting the show.

The show was superseded by Morioh RADIO 4 GREAT, hosted by Yuki Ono.

The program accepted letters from listeners, which were sent using a submission form on the official site.

They read various comments about the series and the latest anime episodes. The radio "Pen Names" were introduced like "Stand Names"!

Daisuke Ono selected a Stand and read e-mails from people describing about how they would use the Stand in their daily life.

My Shocking First Encounter With JoJo Was…!

First encounters with JoJo's Bizarre Adventure can be dramatic. They read anecdotes about how people were introduced to JoJo!