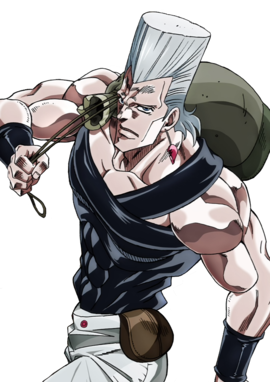 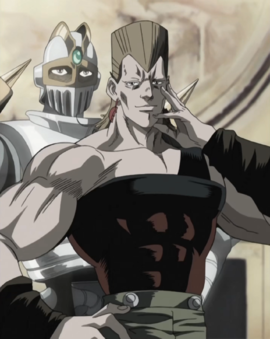 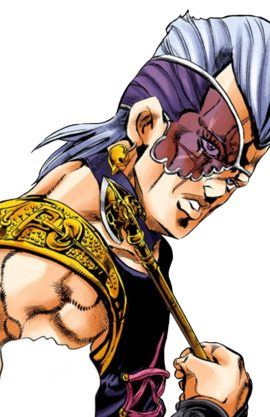 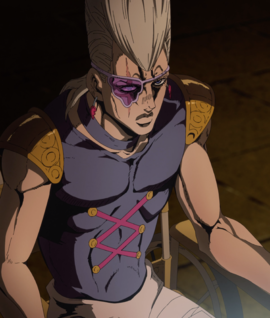 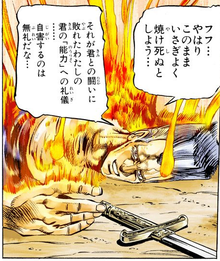 Polnareff's most defining trait is his honor. His first appearance has him handicap himself on purpose by explaining his ability[6] and fight his opponent Avdol in a terrain more suitable to the latter.[7] Polnareff's honor is such that even under the control of DIO, he refuses to do something as dishonorable as attacking someone from the backname.[6] Adopting a chivalrous mindset, Polnareff is reluctant to flee from a fight or use dishonorable tactics, although he can be persuaded if the opponent is one he deeply hates like Vanilla Ice[8] or DIO.[9] He is in fact somewhat happy to see Chaka challenge him directly.[10] Polnareff is also very eager to avenge his fallen loved ones, for instance traveling the world to search for the one to have killed his sister Sherry.[11] Polnareff is well-meaning and will also sacrifice a potential romance so his enemies won't harm an innocent woman, the most notable case with Malèna,[12] whose kindness towards him when Alessi's Stand caused him to shrink into a child moved him.[13] 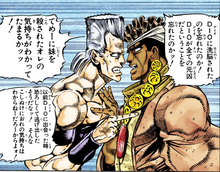 Polnareff's humanoid Stand is Silver Chariot, one of the fastest of all; utilizing a rapier

in a flexible and deadly offense.