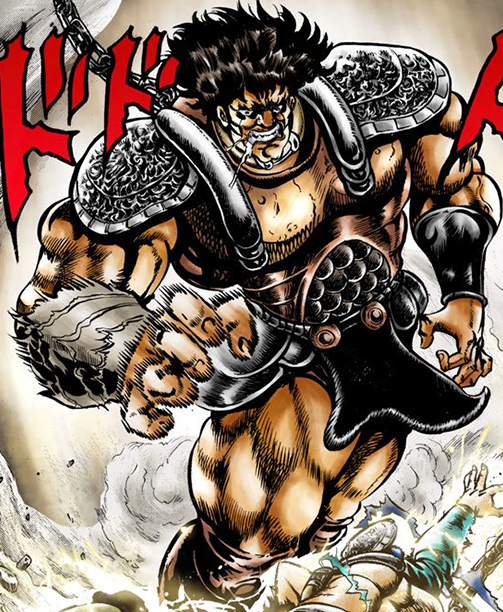 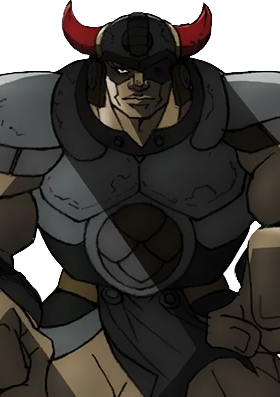 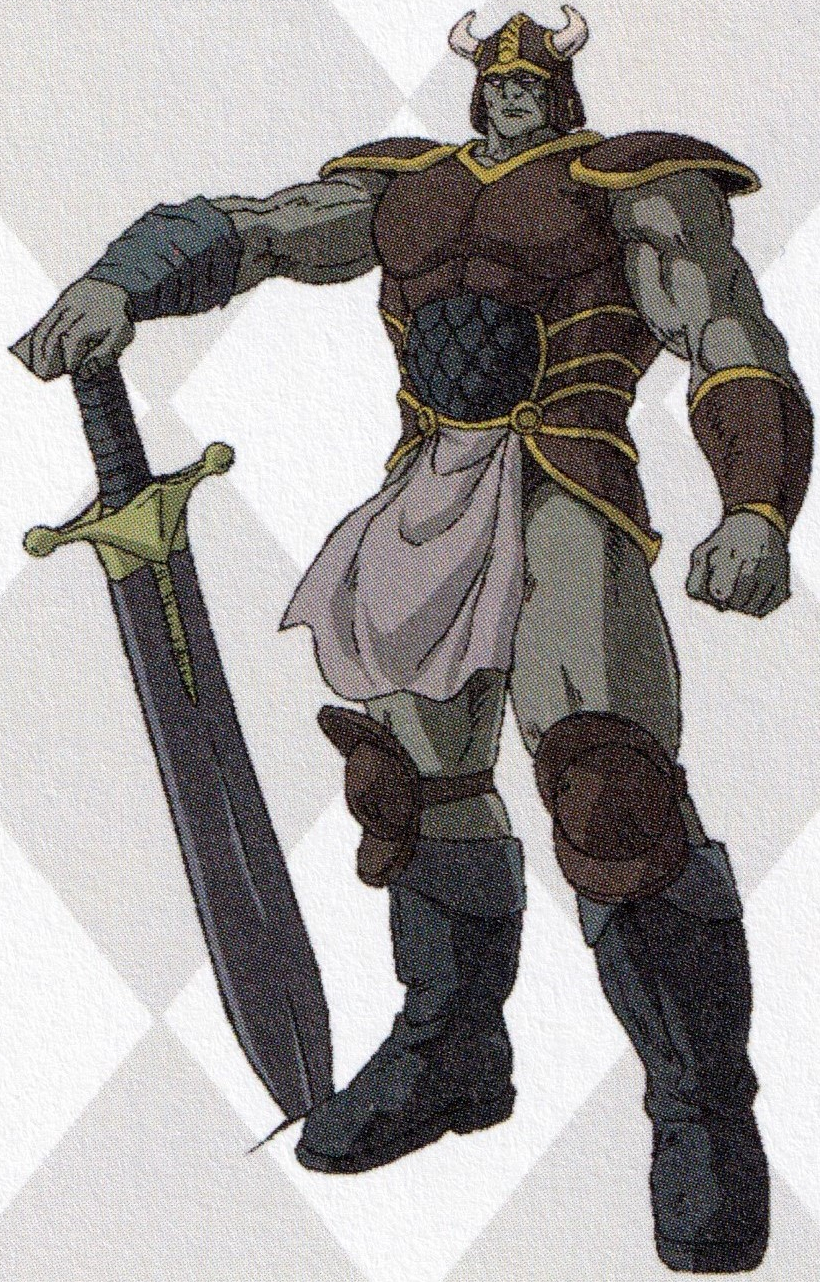 Phantom Blood (PS2 Game)
For a similar character, see Tarkus
“
Let me hear your cries of despair! I'm an elite at slaughter! I create death and destruction by force!
”
—Tarkus, Chapter 31: The Knights' Ruins

Tarkus the "Dark Knight" was a knight from 16th Century Great Britain who was executed after losing a war. Resurrected as a Zombie by Dio Brando, he is wholeheartedly loyal to his new master and fights the Joestar Group.

Tarkus is a towering and heavily-muscled zombie wearing a heavy metal armor consisting of a chestplate, two shoulder pads, two legplates and a loincloth. Tarkus also wears a horned and crested metal helmet on top of his medium-length hair.

“
That messed up spirit. That evil insanity. You've sold even the depths of your soul to Dio, haven't you?
”
—Jonathan to Tarkus, Chapter 35: Pluck for Tomorrow and the Successor, Part 3

Tarkus was a powerful knight during the time he was alive, and loyal to his queen. However, different from his partner Bruford, he lacks a sense of honor. Tarkus gets enraged easily and uses his anger for violence. Due to the corruption of Dio, he thinks of Bruford as a disgrace to the Dark Knights, having no qualms about destroying the armor of his former friend. Tarkus is a brutal and ruthless fighter and enjoys forcing his opponents to battle him to the death in the Chain Neck Deathmatch, even if it is against their own will.

As a trained warrior and one of the only five knights to succeed in the 77 Rings Challenge, Tarkus possesses an incredible amount of physical strength and endurance. Even while alive as a human, his neck could withstand several attacks and break the axes of executioners before being cut.[3]

After being resurrected as a zombie, his brutality and power increases even more, making him capable of squashing people with his bare hands.[4] Tarkus initially demonstrates his strength by lifting a massive portion of the ground that Jonathan was standing on from beneath him, while only using a finger. He then shatters the giant boulder with the same finger.[5]

Later, he throws himself onto a stone wall in order to trap Jonathan in the Lair of the Two-Headed Dragon. Whereas Zeppeli states that Tarkus should be unable to move because his bones would have shattered from the collision, Tarkus manages to climb the building and still be in a state to fight Jonathan and Zeppeli afterwards.[6] A kick from him is strong enough to shatter the bone of Jonathan's upper arm.[7]

Tarkus is an expert at the Chain Neck Deathmatch, having killed forty-eight warriors in death matches.[7] He uses his surroundings to his advantage, such as ensnaring his opponents with a chain to rip their bodies apart.

When Tarkus was a knight of Mary Stuart, he was described as a hero who could cut rocks like butter with his sword. Proving the stories of his past, Tarkus strikes the ground with his sword and slices off a large cliff, causing the Joestar Group to fall.[4]

Born in the 16th century, Tarkus was a member of the Tudor Dynasty

and a retainer of Mary Stuart After losing his relatives in previous wars, the young Tarkus was brought up as Mary Stuart's knight and trained his body for that sole purpose. At the same time, Tarkus became attached to Mary. Alongside his fellow retainer Bruford, the two being of five in history to succeed it, Tarkus passed the Challenge of the 77 Rings in 1563.[8] 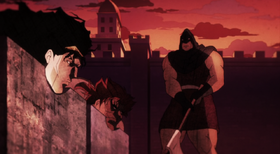 Eventually, when Mary was imprisoned by her political rival Queen Elizabeth, Bruford and Tarkus fought the queen's army until she offered Mary's release in return for their surrender. But on the day they of their execution as enemies of the Crown, Bruford and Tarkus learned from their executioner that Mary was already killed before they gave into the queen's demands. Tarkus was livid to hear that Elizabeth deceived them into giving up their lives for nothing and cursed her in his dying breath, rumors saying that his neck became so rigid from anger that several axes broke before he was beheaded. The story of Bruford and Tarkus was passed down and became famous in England[3]

After taking residence in Windknight's Lot following his transition into a vampire, Dio resurrects Bruford and Tarkus as his zombie enforcers to exploit their hatred against the world. He first summons them to kill Jonathan, Will Anthonio Zeppeli, and Robert E. O. Speedwagon. While Bruford fights with Jonathan, Tarkus fights Zeppeli and Speedwagon. But following Bruford's defeat, Tarkus desecrates his remains while saying that Bruford disappointed him before assaulting Jonathan. When Jonathan and his friends attempt to escape Tarkus on a hang-glider created from Ripple-induced leaves, Tarkus jumps and crashes the glider. Though assumed indisposed, Tarkus' durability convinces Zeppeli that the zombie is a loose end they cannot ignore.

Jonathan enters the building to find a place where Poco can hide safely, finding himself in the Chamber of the Two-Headed Dragon where Tarkus engages Jonathan in a Chain Neck Deathmatch. After Poco nearly gets himself killed to get the others in, Zeppeli proceeds to fight Tarkus before the zombie binds him with the chain which is used to rip the Ripple master's torso from his legs while snapping Jonathan's neck. Fortunately, Zeppeli transfers all his remaining Ripple into Jonathan's body. Empowered and healed by the sudden surge of Ripple, Jonathan shatters his collar then easily kills Tarkus with a Ripple-infused double punch to the face.

Tarkus appears as a boss fight in the game. The player needs to beat him in under 280 seconds. At first, the player uses Zeppeli and then Jonathan afterwards. Like most of the enemies in the game, Tarkus will chase the player trying to attack him with punches and kicks. Tarkus's special ability allows him to use chains to inflict long-range attacks on the player.

Tarkus is playable during some missions in the Extra Battle mode, with either his helmet on or off. With his helmet on, his special ability is to use his giant sword to strike the ground.

Erases panels on the bottom