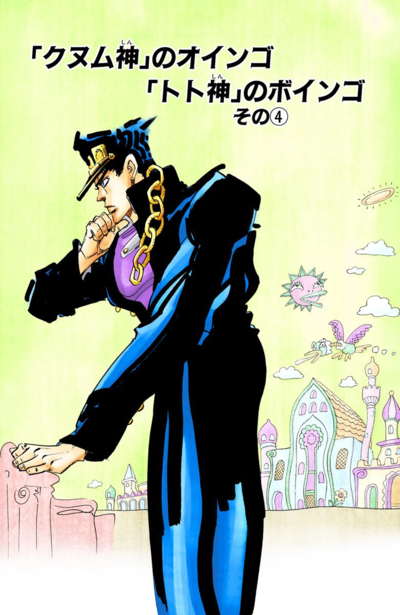 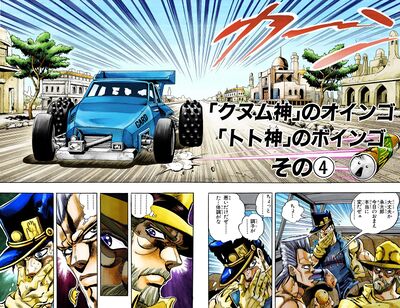 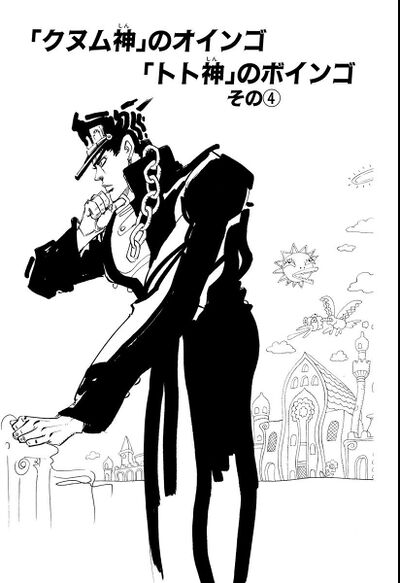 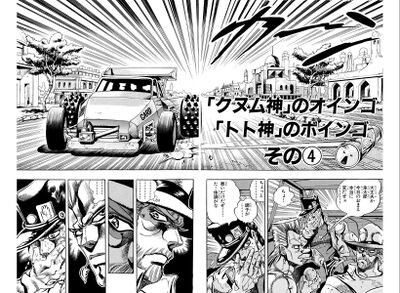 "Khnum" Oingo and "Tohth" Boingo, Part 4 (「クヌム神」のオインゴ「トト神」のボインゴ その④, 'Kunumu-shin' no Oingo to 'Toto-shin' no Boingo Sono 4), originally The Orange Iggy Picked Up (イギーのひろったオレンジ, Igī no Hirotta Orenji) in the WSJ release, is the seventy-ninth chapter of Stardust Crusaders and the one hundred ninety-second chapter of the JoJo's Bizarre Adventure manga.

In the car, Oingo begins panicking as he feels that Polnareff and Joseph are becoming suspicious of him. Also if he continues to disguise himself as Jotaro then Tohth's prophecy will come true and his face will split in half when the orange explodes. However, if he undoes his disguise then Polnareff and Joseph will kill him. Oingo plans on pretending to be sick so that he can escape from the car, but Polnareff points out that Oingo clasps his hands with the left thumb on top. Oingo fears that Polnareff has found out the truth, but it is simply a trick said to determine the gender of oneself in a previous life. Oingo once again tries to put his plan into action, but suddenly Polnareff decides to have an orange eating contest. Polnareff begins to peel the orange flavored explosive, but Oingo yells at him to stop. Joseph and Polnareff notice how strange "Jotaro" is acting, but "Jotaro" simply states that the orange could be dirty as Iggy had found it on the street. Polnareff says that it looks clean and that he'll eat it instead.

At that moment, "Jotaro" rushes out of the car saying he has a stomach ache and that he'll go take care of his business behind a rock. Polnareff tells him to stop, causing Oingo to panic, but only to give him some toilet paper. Oingo runs far away from the car, full with glee as he has finally escaped from his own personal hell. In the car Polnareff thinks about what "Jotaro" said about the orange, and throws it out the window, not willing to take the chances of it being dirty. Still disguised as Jotaro, Oingo continues running gleefully, until he steps on the bomb orange Polnareff threw out. No matter what, a human cannot go against fate. This is what Oingo learned that day. The face of Jotaro was indeed split in half by the power of a bomb disguised as an orange. Boingo rushes to his brother's aid and tells him of his newly found drive to defeat the Joestars himself and avenge his brother. Oingo tries to stop him but Boingo has made up his mind. Knowing that his shy little brother has finally grown up, Oingo can now rest in peace. However, fate is not so kind, as the innocent man Oingo beat up earlier has returned with his huge muscly friends. Boingo will have to wait before he can avenge his brother. And so on this day, the Oingo Boingo brothers lost without their opponents even realizing that they were being attacked.