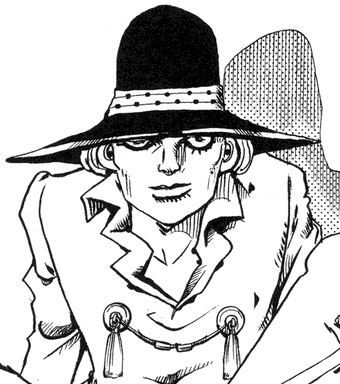 Purple Haze Feedback Chapter 2: me voglio fà 'na casa
“
I never trusted anyone, good or bad. I never felt guilty for betraying them. I never distinguished between right and wrong. I never understood the difference between God and the Devil. But as long as I feel ashamed, I will never do anything to disappoint him. No matter who else spits on me.
”
—Cannolo Murolo, Purple Haze Feedback Chapter 6: fantasia siciliana

Aside from being the supervisor and sole member of Passione's data analysis team, he is a Stand user who wields the omniscient All Along Watchtower in tracking Sezione Droghe's location.

Cannolo Murolo is described as a thin Italian man dressed in unusually old-fashioned clothes reminiscent of 1930s actors James Cagney and Humphrey Bogart in a mafia film.[4] He wears a jacket decorated with aiguillettes attached to the chest, a plain pair of pants, and a pair of old fashioned shoes. He also adorns a signature Borsalino hat and a scarf around his shoulders.[3]

According to Pannacotta Fugo, Murolo reminded him of the first victim he was ordered to kill with Purple Haze and even smelled similarly to him.[3]

Cannolo has a dour personality, constantly grumbling against something and thinking that his teammates owe him respect because of age, although he also generally respects his superiors.[3]

Cannolo is also deeply paranoid because of his job. He dislikes the sound of knocking.[3] He also considers anything out of the ordinary to be suspicious and often questions the motives of Fugo and Sheila E.

Prior to the events of the story, Cannolo was self-described as a shallow man who had nothing to believe in and didn't have a care in the world, notably about the crimes he's done, and only acted for his benefit.[4] However, his meeting with Giorno changed him. Cannolo looks up to Giorno and currently tries to uphold Giorno's code and is deeply loyal to him.

Main article: All Along Watchtower

All Along Watchtower is a deck of cards allowing Cannolo to seemingly divine information. It addition, it also divides any damage received by Murolo by fifty-three.

Cannolo Murolo was born into the bottom of society, and lived a hopeless childhood.[4] After joining Passione, his Stand makes him arrogant and he tries to sour relations between La Squadra Esecuzioni and the boss for his own benefits. At one point, Murolo provided intel about the Boss's true identity to Sorbet and Gelato, resulting in the two's death.[5] As a supervisor for Passione's data analysis team, Murolo also helped the assassination team restore the photo showing the hiding spot of a crucial disk, allowing Ghiaccio to attack Team Bucciarati.

When he meets Giorno, Murolo feels shame for the first time in his life, and eventually becomes loyal to him.

Murolo is ordered to atone for this by helping take out the Sezione Droghe. In addition, he has another objective: To locate and destroy the stone mask the Nazis hid in Cathedral of Syracuse on Ortygia island. Giorno ordered him to do so instead of going himself because the SPW Foundation and Jotaro may be monitoring Giorno.[4] Because of this objective, Murolo can act with some degree of freedom even while he is on his mission.

Murolo meets Pannacotta Fugo and Sheila E in a hotel as the reinforcement sent by Mista. He introduces himself as the supervisor and the only member in Passione's data analysis team. A banter between Sheila E and Murolo reveals that both of them have been assigned on the mission with Fugo to clear their names. As Murolo lays out all the documents on a table, one of the photographs catches Fugo's eyes as he recognizes the man as Massimo Volpe, an old friend who was in the same class as him in college.

Murolo narrates how Passione immediately rose to power in the past by entering the drug trade. With the help of Volpe's Stand Manic Depression, which turns salt water or rock salt into narcotics, drugs production was faster and easier. He remarks that had Risotto Nero's assassination team succeed in taking over Diavolo's drug business to monopolize the import trade, they would not have known that Passione never imported drugs to begin with. When Sheila E explains her revulsion at the mention of the assassination team, Murolo realizes that she had joined the assassin team to betray them and raises his guard around her.

Fugo then asks where Volpe is, when Murolo pulls out a deck of cards from his suit and begins to shuffle them. He pretends to perform a magic hat trick and even demands a clap from Sheila E and Fugo, with the latter being the only one participating. The cards form a tower formation, sprout tiny arms and legs, then introduce themselves as All Along Watchtower. Presenting themselves as the Watchtower Troupe, the cards actually has the ability to spy on targets, albeit in a circus show act. During its performance, a brawl between the cards broke out due to their positions until the four of hearts card reveal Vladimir Kocaqi and the rest of Sezione Droghe's location in Taormina. Sheila E remarks that because Stands reflect the user's true mind, the cards were also as obsessed with hierarchy as Murolo. Meanwhile, Fugo ponders about Taormina.

The three continue their investigation in the Strait of Messina while a labors' strike - presumably ordered by Passione - leaves the port as a ghost town. At a warehouse, Sheila E unveils her Voodoo Child which can turn anything into pairs of lips that uncovers anyone has said, thought, or felt in the vicinity. Fugo recognizes one of the lips' voices as Volpe's and it repeatedly utters the words "obey you". Sheila E deduces that Volpe feels guilty about following Kocaqi's commands, although Fugo isn't sure himself. Confirming the Sezione Droghe's whereabouts in Taormina, the three head to the harbor to board a yacht. While Murolo prepares to dock to Sicily, the skies begin to rain.

Murolo anchors the yacht on a rocky coast and the three make landfall on a lifeboat by using Purple Haze and Voodoo Child to carry it over a cliff face. Sheila E uses her Stand to throw a boulder at the yacht and sinks it in the water. Fugo observes the strange easiness in getting to Sicily. Hearing a brief conversation between Sheila E and Fugo about Passione, Murolo warns them for talking about Mista and Giorno lightly. Suddenly, Sheila E notices something strange and runs off to track down a vomit-like scent.

Fugo and Murolo continue their search in Teatro Greco as it rains on the island. While telling Fugo about his fragile temperament, Murolo spots Vladimir Kocaqi and immediately flees. A brief confrontation ensues, but Fugo is trapped under Rainy Day Dream Away's ability to lock any feeling or sensation. With Fugo trapped into falling across the ground forever, Kocaqi leaves him to look for Murolo and Sheila E.

Sheila E hears Fugo's screams and rushes to Teatro Greco where Murolo and Kocaqi await her. Despite her strength, Kocaqi manages to trap her into thinking that she couldn't beat him and locks that feeling inside her. He tells her that he will not kill her before turning to Murolo, whom he then taunts by saying that he knows about Murolo's past and how he put others in danger while watching from the safety of high ground. Before Murolo can draw his weapon from his hat, they are interrupted by a loud thunder in the distance. Kocaqi realizes that Fugo had used Purple Haze to blindly throw himself in the sky and exploit Rainy Day Dream Away's ability by falling at the same speed as the raindrops. Fugo and Purple Haze fall towards Kocaqi and the Stand's fist fatally hits Kocaqi, who instantaneously dies from the impact of the blow while his body melts due to the virus.

Voodoo Child catches Fugo before he can hit the ground. Suddenly, he strangles Sheila E by the neck. Murolo commands Sheila E to withdraw her Stand because its arms had been wrapped around Fugo too tightly that his spine could snap at any moment. After putting Voodoo Child away, Fugo releases her throat and Murolo approaches him. Sheila E notes the empty look in Fugo's eyes and looks around for Kocaqi's body. She shivers after realizing that his body vaporized from Purple Haze's infection.

Later on, Murolo informs Gianluca Pericolo about Kocaqi's death to be reported to Giorno Giovanna. Confident in the team's capabilities in taking down the remaining members of Sezione Droghe, Giorno does not send any reinforcements to help them.

Murolo, Sheila E, and Fugo inspect anything that remains in the now-empty hideout of Sezione Droghe. Murolo deduces that the gangsters were allies of Kocaqi up until his death, causing them to turn on Volpe and the others. He leaves the room to summon his Stand and tracks down Volpe in Ortygia, Syracuse. Murolo then calls for a helicopter to fly them to Syracuse.

On the helicopter flying over the Ionian Sea, Fugo asks Sheila E what she would do if she found herself surrounded by strange men, whereas she bluntly replies that she would only ignore them. Sheila E tries to ask Fugo something before stopping herself. Murolo notes the awkward silence so he pesters the pilot from Passione to lower the helicopter's altitude. Suddenly, their helicopter is attacked by Angelica Attanasio's Nightbird Flying, which incapacitates them and the pilot, sending their helicopter into the sea. All passengers are caught in a hallucination by the Stand's ability, with Murolo foaming at the mouth, and only Fugo and Sheila E are able to jump off before they crash.

Due to All Along the Watchtower's ability to divide incoming damage to him, he emerges alive and unharmed save for his wet clothes at the bay of Via della Maestranza. He watches as Vittorio Cataldi runs off to retrieve the Stone Mask and follows him to the Cathedral of Syracuse. Vittorio finally retrieves the Stone Mask in between the cathedral's walls, but Murolo arrives to take it from him. Murolo tests the Mask by letting the blood from his index finger drip on it, which immediately reacts when dozens of spikes appear behind the mask. Seeing this, Murolo takes a gun from his jacket and shoots at it. Vittorio is taken aback and uses Dolly Dagger to slit his own throat and reflect the damage to Murolo, but surprisingly, no damage comes to him. He reveals to Vittorio the true nature of his Stand. He also reveals that destroying the Mask was a secret part of his mission, an agreement between Passione and the Speedwagon Foundation to stop the menace. As he attempts to redeem Vittorio, the latter only stabs himself repeatedly, killing himself in the process. Murolo then gazes at the entrance of the church and wonders where Fugo and Sheila E are.

Murolo appears in the Temple of Apollo directly after Fugo defeats Volpe. He tells Sheila E, who is already weak from the endless torture by Volpe, that Stand users reflect their own Stands, which is how Purple Haze had evolved into a new form due to Fugo's resolve. Despite her weak state, he remarks that she only has a few broken bones and that she will survive. She wonders how Murolo is still alive but is too exhausted to think, later passing out. Meanwhile, Nightbird Flying flies into the moon and vanishes. The mission is finally complete.