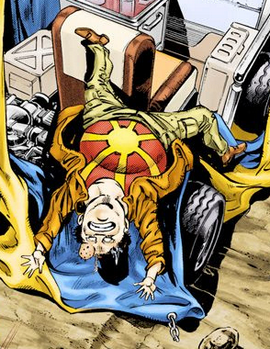 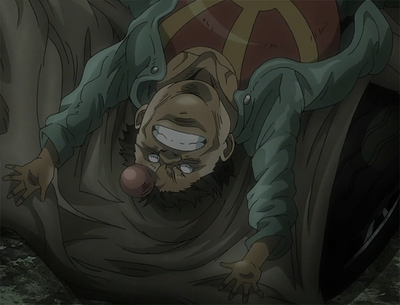 JoJo's Bizarre Adventure (SFC Game)
“
"The Sun" card's Stand... He was a formidable opponent, but once you've figured out his trick, he's just another idiot.
”
—Jotaro Kujo about Arabia Fats, Chapter 167

He is an Agent of DIO, who ambushes the Joestar Group in the middle of the Arabian desert with his Stand, Sun. 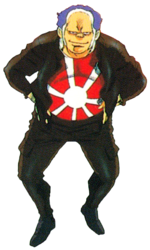 Arabia Fats is a short, overweight man with short, spiky hair and a receding hairline. He has a T-shirt bearing a sun resembling the Rising Sun Flag of Japan. He also sports an unbuttoned coat, cargo pants, and loafers.

Arabia Fats's personality is never fully shown because of how quickly he is defeated, but he is shown to be a well-prepared, patient, immoral Stand user who is willing to wait as long as it takes for the Joestar Group to die from his Stand. He made sure his hiding spot was comfortable since his Stand dramatically increases the temperature of the environment, giving himself a seat, drinks, and air conditioning. He is also shown to be clever in that he attached a large mirror to a small vehicle to take advantage of the desert's barren landscape. However, this ingenuity was not enough to prevent his defeat as the mirror unfortunately reflected a large rock, exposing him. Jotaro calls him an initially formidable but actually rather shabby opponent.[2]

Arabia Fats's Stand is a great fiery sphere akin to the sun itself, which can heat the surrounding area to dangerous levels, give the impression of daylight, and shoot rays of energy. However, Arabia himself is not immune to his Stand, and he must stay within a certain range of his targets to continue exposing them to its effects.

Arabia Fats had been following the Joestar group up into the desert in a car equipped with an air conditioner. He stayed camouflaged by using a mirror device attached to his car that reflected the sand's image in the desert, so the group wouldn't notice him. 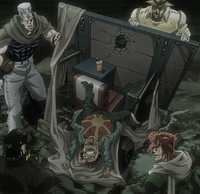 Suffering from the heat produced by Arabia's ability, the group eventually suspected the sun itself to be a Stand. Believing it to be hostile, Noriaki Kakyoin attacked it but received a counterattack from Sun, confirming the group's suspicion. Giving trouble to the Joestar group at first, Arabia Fats was discovered when the gang noticed that there were two of the same rock, with their shadows pointing at opposite directions, thus meaning one was being reflected. Jotaro Kujo used Star Platinum's precision to identify where exactly Arabia Fats was and put him out of action instantly after throwing a rock to his face. Finding Arabia Fats' body, the group claimed that his Stand was rather childish and Fats an idiot for using such a trick, with Jotaro wanting to believe his intelligence was affected by the heat while Joseph lamented for not getting to know the names of the Stand or its user. It is unknown if Fats survived the blow, but given the comical appearance of his bruise, it's likely he was merely knocked unconscious.

Araki created Arabia Fats to appear as a very strong, intimidating enemy to trick readers into thinking the battle would last several weeks only to see him defeated nearly instantly after the Joestar Group discovers his Stand's trick.[3]

Arabia Fats was not given a proper name until several years after Part 3's publication, where it was revealed in the PlayStation port of Heritage for the Future and eventually documented in JOJO A-GO!GO!.

Arabia Fats is one of the many bosses featured in the game. When the group reaches Egypt, they will be stuck in the desert endlessly and the player must trigger the fight by checking the sun. When he does so, the Sun will come to attack the group. Afterward, Arabia Fats will surrender, give the group money, and tell them about Iggy who is dwelling in a nearby desert town.