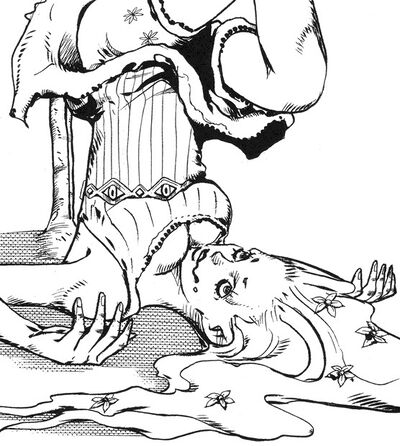 Dissolved into pulp via Purple Haze[3]

Angelica is a drug addict with a rare blood disease. She is a member of Sezione Droghe, the former narcotics division of Passione. After her team betrays Giorno Giovanna's orders to disband and goes rogue from the gang, Pannacotta Fugo, Sheila E, and Cannolo Murolo are assigned to eliminate them.

Although her illness makes her too weak to fight, Angelica is a Stand user who possesses the small but deadly Nightbird Flying, which can induce fatal drug addictions in her opponents.

Angelica is described as extremely sickly and frail, with pale skin but faintly red lips. Her neck often trembles and seems as if it could easily snap under the weight of her own head.[4] She has long, wavy hair decorated with flowers. Because of her condition, blood frequently trickles out of her mouth and inhibits her from doing strenuous movements.[5]

She wears a short, sleeveless nightgown decorated with a wrap vaguely resembling interconnected eyes directly below her chest. Underneath the dress, she wears bloomers with flowers printed on above the hem. A string of beads wrap around both her legs, starting from the shins up to near her ankles. She also wears low-heeled shoes.

As a young "junkie girl", Angelica is an inattentive and absent-minded girl, often lost in her own thoughts due to the severe effects of the drugs produced by Sezione Droghe. To alleviate this, she takes the ones Volpe developed with Manic Depression, which temporarily inhibits the aggravation of her illness. Her abstracted behavior is notable when she seems to not have noticed Sale and Mario Zucchero, who both initially infiltrated their hideout in order to ambush their team. This also comes into advantage as behind Angelica's preoccupied thoughts, she is actually observant of others and their abilities, such when she had easily recognized Zucchero's Stand before Massimo Volpe and Vittorio Cataldi did.[4]

Despite this, she retains a rather optimistic and bubbly personality, and has a rather skewed amusement when it comes to others' misfortune. She resorts to bursting into laughter when Volpe treated Cataldi harshly. She also has little to no remorse when it comes to violence, even if her life is on the line, and would willingly endanger an entire town if she feels she has to.[6]

Having been a member of the Sezione Droghe, Angelica is very fond of her teammates and would not hesitate to kill anyone who gets in their way. She treats Vladimir Kocaqi with the utmost respect, and as such, showed extreme distress after hearing about his death.[7] She also shows a sense of motherly love to Vittorio, especially when she kissed him on his face in order to encourage him in their confrontation with Pannacotta Fugo's team, who had been sent out to eliminate them.

Angelica also shares a special fondness with Volpe aside from her dependency on the drugs produced by his Stand. Oftentimes she would encourage him to make genuine smiles by pulling the corners of his mouth up, even if Volpe would refuse to budge. When Volpe showed a smile of relief right before she died, she praised him for it, noting that he looked "cute" when he smiles.[3]

Angelica's Stand is able to spread the symptoms of the final stages of drug addiction onto others.

Not much is known about Angelica's past prior to becoming a member of Passione aside from being a junkie.[4] Born with a rare blood disease, Volpe used his own Stand to temporarily inhibit the disease's progression.[5]

Angelica uses Nightbird Flying to lure Sale and Mario Zucchero further into the warehouse in Villa San Giovanni, leaving them vulnerable to the rest of the Sezione Droghe. After Sale's death, she informs a just-returning Volpe of Zucchero's whereabouts, explaining to Volpe the nature of Zucchero's Stand, leading to his death.

After Kocaqi returns, Angelica happily greets him, resting on his knee like a cat. After Kocaqi finishes his exchange with Volpe over Volpe's role in the team, Angelica laughs, saying that everyone in the team is great.

During Volpe's interrogation of Zucchero, Angelica notices Volpe's attention to Fugo's name being mentioned and asks if the two were friends. Volpe denies it, saying Fugo never had any friends, but Angelica still prods him for answers, further asking what it's like to fight a friend. Her insistence displeases Volpe, but Angelica only moves to drape over him, complaining about his frown, and encourages him to smile for her. Volpe feigns a smile, and Angelica tells him to smile genuinely, pulling at the corners of his mouth, but soon giving up. Blood trickles from her mouth, and Volpe wipes it away. Using Manic Depression, Volpe's Stand pats her back and relieves her of her illness' symptoms for the time being.

Along with Volpe and Vittorio, she stays behind while Kocaqi leaves to confront Fugo and the others after the Sezione Droghe. However, Kocaqi is later killed by Fugo.

When news of his death reaches the remaining teammates, Angelica sobs loudly in a corner of the warehouse, now covered in scratches, broken bones, and blood from Vittorio's vicious, grief-driven self-harm. It is not until after Volpe collapses onto the ground and Vittorio's self-harm stops that she herself stops sobbing. Vittorio determines that their only choice now is to steal the Stone Mask hidden underground in Ortygia, a small island in Syracuse, Sicily, known as a historical center.

A brief debate over the necessity of the Stone Mask goes on between Vittorio and Volpe, but Angelica suddenly sobs loudly, angry and staring at nothing. She exclaims that they must make Fugo and his group pay for Kocaqi's murder. Vittorio agrees with her, and she follows him out of the warehouse.

With Nightbird Flying, the two attempt to take down the helicopter Fugo and the other two are using, but Volpe informs them that not everyone - or anyone at all - died because the landings were too scattered. Angelica admits she doesn't know what exactly happens when using her Stand, as it is long-ranged, but she assures Volpe she felt one or two people die. Volpe tells Vittorio to head to the site where the Stone Mask is, while he and Angelica wait to ambush Fugo's group. Vittorio insists he'd be able to handle the group for them but Angelica tells him that she and Volpe would be unable to do it because she isn't fast enough to get there in time, and has no fighting capability. Angelica places her hands on his cheeks, kissing him all over his face, assuring him that he can get the mask himself.

After they split up, Angelica hides with Volpe in a room, using Nightbird Flying on Syracuse to get to Fugo's group. The Stand enables Vittorio to reach the mask's location, with everyone around in a zombie-like state. It causes a car in front of the one Sheila E drives to crash, spreading to other car crashes as well. Sheila E stops their car abruptly, telling Fugo that he has to take care of the rest himself, as her nerves have gotten to her.

Using her Stand, Angelica is in a dazed state, staring vacantly at nothing, with Volpe beside her. Volpe leaves, and the sounds of car crashes and other havoc do nothing to stir Angelica. However, after her Stand returns and lands on her finger, she comes to. Now aware of her surroundings, fury overcomes her, and she vows that Fugo will pay for Kocaqi's murder. She tries to standing, but her legs are unable to support her, and she ends up having to lean against a wall and stagger out of the room.

Meanwhile, Fugo struggles to get through the zombie-like horde Angelica's Stand created. Now, Nightbird Flying enhanced Manic Depression's effects, making the horde attack Fugo without any awareness of what they were doing. The Stand's effects numb Fugo to any pain, and he doesn't notice the depth of a cut on his cheek until blood from it drips onto his thigh. The strengthened effect clues Fugo on to Angelica being near, but he loses balance in the horde, and Angelica takes her chance to stab within the side with a knife, cutting through muscle and tendon.

After stabbing him, Angelica makes her escape, and the horde piles over on Fugo. However, this makes her easy to spot, and Fugo is able to attack her with Purple Haze. With Angelica dying, the horde's nature slowly dissipates and calms, and Volpe finds his way out, frantically looking for Angelica. The chaos the horde created damaged Sicily's powerlines on the mainland bridge, and a flickering streetlight briefly reveals Angelica's figure, Volpe identifying it as her because he knows only she is as pale as the figure seemed.

She announces her presence to Volpe, much to his relief, and tries to approach him only to stagger and slump against the streetlight to support herself, staring at him with wide eyes. Volpe moves to approach her, smiling, but Angelica abruptly points her finger at him happily. Volpe is confused, and Angelica says that she finds his smile cute. She smiles to herself and falls to the ground. Succumbing to the viral erosion of Purple Haze, she dies.