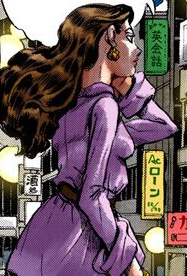 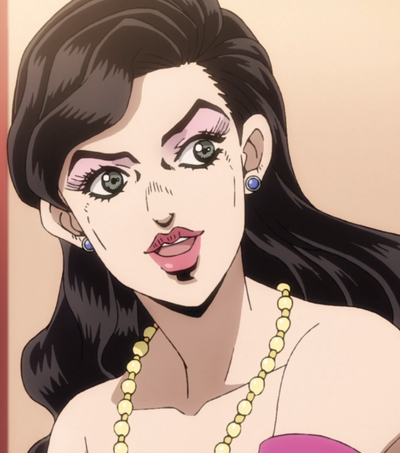 GW Episode 1 (Photo only)
“
Although Giorno's mother was a very beautiful woman. She was in no way a good mother.
”
—Narrator, Chapter 444: Bucciarati Is Coming, Part 2

Sometime before the events of Part 3, this Japanese woman was involved with the newly resurrected DIO and gave birth to his son, Giorno. While her first name is unknown, her apartment lists her as Ms. Shiobana,[1] where her son got his last name "Shiobana" from.[2]

In the anime, she has black long hair with grey eyes. In the anime her first outfit is an all-white coat with no bracelets, red heels, purple earrings, and a black purse with a yellow strap. Her second outfit is a pink dress with a bead necklace, and she wears gold bracelets similar to her manga outfit.[1]

At her wedding, she wears a white wedding dress with her hair tied back into a bun with a headband and a corsage in her hand.[2] In the anime, a veil and earrings are added to her wedding outfit, along with a photograph of her wearing a white dress and sunhat.

“
I'm not going to sacrifice my freedom just because I have a kid now, no way!
”
—Giorno's Mother, Chapter 444: Bucciarati Is Coming, Part 2

Although she was considered a very beautiful woman, she was by no means a good mother, having left her infant son alone in the middle of the night to enjoy partying.[2] She valued her "freedom" and was not willing to stay home with her son, wanting to live her life as she did before he was born. It is unknown if she was aware of her husband beating Giorno, but it is noted he only did so while she was not around.

In the anime, it is shown that her apartment is rather messy while she is out partying, and that she brushes off her friend's comment about leaving Giorno alone there.[1]

Sometime before the events of Stardust Crusaders, this Japanese woman was involved with the newly resurrected DIO and unexpectedly became pregnant with Giorno. Women were mere tools or food to DIO so it's unknown how she managed to escape, as nobody really knows what happened.[2] She moved back to Japan in 1985 to give birth to Giorno.[2] She was subsequently prevented from being killed due to DIO's defeat at the hands of Jotaro.[3] When Giorno was around 1-2,[1][2] she would often leave her infant son alone in the middle of the night to enjoy the night life. Waking up in the middle of the night and realizing his mother wasn't home, Giorno would feel despair and horror, and could only tremble in the dark.

When Giorno became 4, she married an Italian man and became an Italian citizen by marriage,[2] moving her and her son to Naples in Italy.[4] In the anime, a scene is added showing her new husband convincing Giorno to be in their wedding photos as his mom is waiting for him, which are later seen at their house in Italy.[1] However, her husband was a violent man who would hit the child behind her back, only stopping after Man X began looking out for Giorno.[2]

The Speedwagon Foundation foundation would later discover around the year 2000 that DIO could have fathered a child.[4] In the anime, it is shown that Jotaro is investigating her and her husband in relation to Haruno.[5] By the beginning of Vento Aureo, it is shown that Giorno is living in a dorm at his high school rather than with his family.[6]