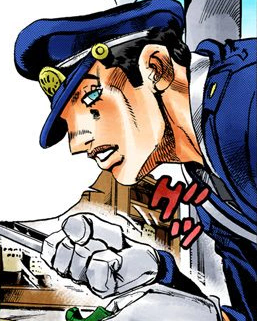 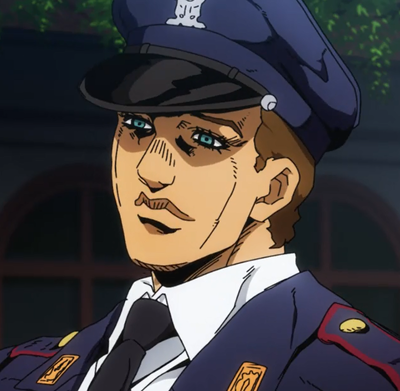 Fatally shot in the chest by a criminal

GW Episode 6
“
You've done a fine job. You have the same will. Just like you did when you first became an officer. That will has returned to your heart, Abbacchio.
”
—Abbacchio's Partner to Leone Abbacchio, Chapter 550: Beneath a Sky on the Verge of Falling

He used to work with Leone Abbacchio as a police officer up until his death, when he sacrificed himself to save his partner from a criminal. He later appears to Abbacchio in the afterlife.

Abbacchio's partner is a brave and selfless crime fighter, non-hesitant on sacrificing his own life to shoot an armed criminal.[3] In the afterlife, he portrays an analytical behavior, as he is seen carefully inspecting pieces of broken glass. His philosophy is to search for not just the result, believing that if one tries to search for just the result they "lose sight of the truth". He also believes that what's important is the will to seek out the truth, and that even if a perpetrator got away, all that matters is if he's reached his "destination".[4]

Even after knowing that it was essentially his own partner Abbacchio who let him get shot all because Abbacchio took a bribe, he still displays a caring attitude to him, telling him that he did a fine job.

Sacrificing his own life to save his partner.

One night, the man and his partner received a report that a robber had broken into an old man's house (in the anime, the report was a shop being robbed).[3][5] The two rushed to the scene; Abbacchio went through the back and found the criminal he had made a deal with earlier. In their confrontation, Abbacchio was too hesitant to do anything and didn't realize the criminal pulling his gun out. At that moment, Abbacchio's partner jumped in and both he and the criminal fired at each other. The criminal was merely shot in the arm, but Abbacchio's partner was fatally shot in the chest and he immediately died.

After the incident, not only had Abbacchio faced charges of being a dirty cop, but he lost his job for letting his partner die. Since then, Abbacchio would be thrown in a great depression, almost never being happy. The fact that his own actions made his partner get killed became a cross on his back that would never be removed.[3]

After his own death, Abbacchio finds himself eating on a table. He finds an officer inspecting shards of glass underneath the table, little did he know that the officer is his former partner. Abbacchio's partner explains that he is inspecting some glass because there was an incident where the victim was hit in the head with a glass bottle and shards of glass were flying everywhere, and he's trying to find fingerprints. When asked what he's going to do when he doesn't find anything, he says that only the results are not what he's looking for. When one looks for just the results, they look for shortcuts, and when they look for shortcuts, they lose sight of the truth. That is what Abbacchio's partner is trying to avoid.

Abbacchio declares his envy for the officer. He says he's also been an officer, but messed up. That is when the officer claims that Abbacchio didn't, mysteriously stating Abbacchio's name as well. Realizing that the officer is his former partner, Abbacchio tries to take the bus to go back to his team, but his partner says that's the bus he took, and that was the last stop. There's no going back.

Crying, Abbacchio tells his partner that he died on patrol because he took the bribe, and that he was the one who made a huge mistake. However, Abbacchio's partner tells him that he should be proud that he's done a fine job. Both Abbacchio and his partner's souls ascend as he passes away.