The Mist of Vengeance 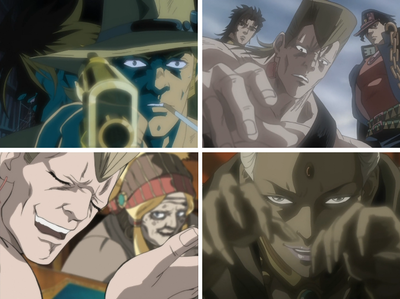 The Mist of Vengeance (ADVENTURE6 報復の霧, Adventure 6 Hōfuku no Kiri) is the sixth episode of the JoJo's Bizarre Adventure OVA. It adapts Chapter 154 through Chapter 157, along with Chapter 210 of the manga.

Hol Horse returns to DIO's lair to report his failure. DIO expresses his dissatisfaction and taunts Hol Horse, making him try to shoot him. DIO suddenly reappears behind Hol Horse, impressed by the gunman's composure and leaving. Hol Horse realizes the gap between them. It is revealed that the scene was a dream of the past and Hol Horse is now in the desert.

The group is now in Arabia refueling their truck, it has been a month since their departure. When Enya summons Hol Horse, she drives a pick into his wrist, exclaiming that he left J. Geil to die and as such deserves death. She then uses her Stand, Justice. A deadly fog then takes control of Hol Horse' arm, forcing him to shoot himself with Emperor.

A heavy fog sets in, forcing the group to stop at the next town. The streets are deserted and the only people they can find at a few fresh corpses or people covered in pimples. The first friendly face they meet is a kind old woman inviting them to stay the night at her hotel. In reality, this woman is Enya in disguise.

The group enters her hotel, but Jotaro gets suspicious when she calls Joseph by her name and Polnareff mentions that she's only using her right hand. Nonetheless, Enya deflects their suspicions. Waken up by a nightmare, Polnareff goes to the hotel's bar and meets a beautiful woman, who is Enya is disguise. Meanwhile, the hotel is getting surrounded by a crowd. Hol Horse barges in from the closet, having survived Enya. Enya is forced to reveal herself and sics the clients of the bar, revealed to be zombies, on Polnareff.