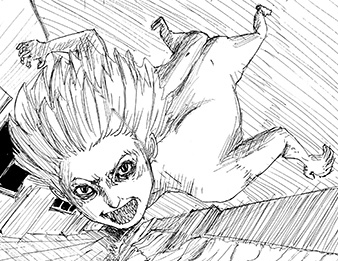 He is the husband of Maria and the father of Antonio. He becomes a vampire and battles Lisa Lisa.

It is unknown how he looked like as a human, but as a vampire, he looks like a slightly older version of his son Antonio. He has light spiky hair, a slightly muscular torso, and fangs.

Alejandro is a violent and neglectful father, enabling his wife's abuse of their son. As a vampire, he states that he thought Antonio looked all right but considered him an awful brat who he hated. He is cunning as he pretends to be a Spaniard, and later manipulates his son's teacher, Mr. Fernandes, to close the curtains for him in the school hallway so that he could enter his son's classroom.

According to George Joestar, his voice has a strange sweetness to it which made George feel dizzy. He also pretends to be a gentleman by calling Lisa Lisa a young lady at first, asserting that she shouldn't talk rudely to grown ups.[1]

Alexander lived in England and married a woman named Maria. They had a son named Anthony in 1889. Alexander was in the railroad business but went bankrupt and ended up moving to La Palma, where he changed his name to Alejandro Torres and his son's name to Antonio Torres so that they would sound more Spanish. At some point, he became a vampire, presumably due to Dio Brando.

Alejandro eats the blood, flesh, and bones of his own son, unknowingly making Antonio into a zombie. Lisa Lisa lures Alejandro out of hiding by disguising herself within Antonio's hollow corpse and then walking to school, confusing him into thinking Antonio was somehow still alive. Alejandro kills his son's teacher, Mr. Fernandes, and turns him into a zombie to control him into closing all the curtains in the school hallway so that the sunlight would no longer shine through the windows. Tsukumojuku Kato spots him standing on the ceiling of the hallway and wonders if Antonio had an older brother, because of Alejandro's young appearance.

Alejandro asks Lisa Lisa if she has seen his son. After Lisa Lisa insults him for being a terrible father, Alejandro lunges toward her planning to eat her guts. Lisa Lisa uses her Ripple ability named Indigo Blue Overdrive on the ground. The Ripple heads toward Alejandro, knocks him backward, and instantly crumbles his body. Straizo and the other Ripple warriors later clean up the remains of Alejandro and Antonio.[1]