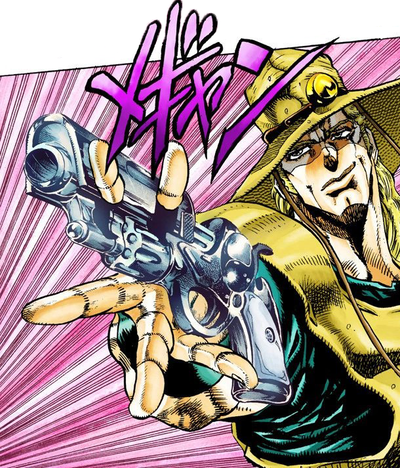 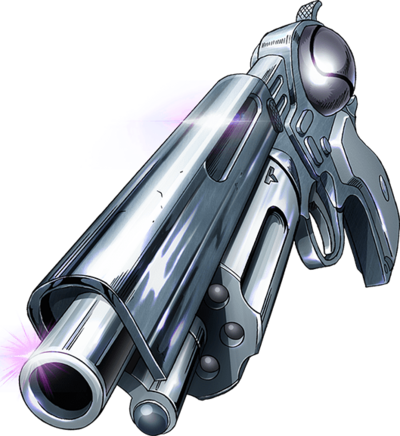 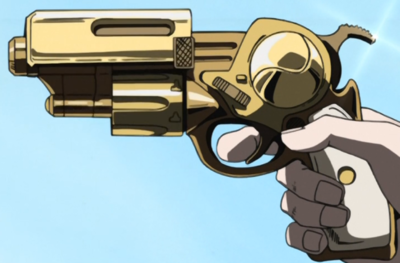 Emperor (エンペラー（皇帝）, Enperā) is the Stand of Hol Horse, featured in the third part of the JoJo's Bizarre Adventure series, Stardust Crusaders. The Stand takes the form of a gun that the user can summon into his hand, allowing him to shoot his foes with controllable bullets.

Emperor is a Stand in the form of an elaborate, impractical-looking revolver with some futuristic elements. A metal frame covers the long barrel, under which is positioned a cylinder with no apparent use, as it is not connected to the barrel. It has no sight, and a large sphere is embedded in the metal frame between the hammer and the barrel.

Hol Horse summons it directly into his hand.

Araki comments that its design is that of a revolver combined with an automatic pistol.[1]

It represents the tarot card The Emperor, which symbolizes order and control.

The series is known for alternating colors between media, the information presented below may or may not be canon.
Gun(Steel Blue)
Gun(Bronze)
Gun(Varying shades of Gold)
Grip Panel(White)
(Default)
Gun(Silver)
Grip Panel(Wooden Brown)

As a gun Stand, Emperor functions as a weapon for Hol Horse. Due to its straightforward nature, Hol Horse must compensate through cooperation with allies to gain the upper hand.

Hol Horse controls the trajectory of the bullets

The characteristic ability of Emperor, and its most dangerous is its ability to freely control the trajectory of its bullets as they are also a part of the Stand.[2] Hol Horse is able to control the bullets with enough precision that he was able to circle Silver Chariot's sword with no lag time,[2] do a u-turn,[2] and have them navigate through a narrow conduit without seeing them.[3]

However, since they are still part of Emperor, the bullets are still subject to limited range; although having a better-than-average range for a Close-Range Stand, Emperor's effectiveness still drops rapidly as the bullets reach the limits of that range.[2]

One of the lesser properties of Emperor is that Hol Horse summons it directly in his hand. It allows him to perform sneak attacks[4] and in a contest of summoning speed, Hol Horse is able to attack first.[5]