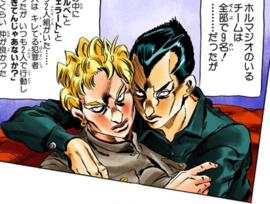 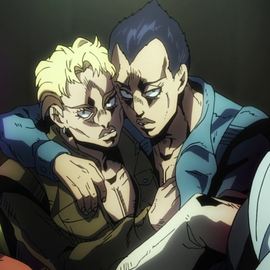 They are deceased members of La Squadra Esecuzioni, who were executed by the Boss because they tried to unmask his identity. Their deaths create a grudge between the members of Squadra Esecuzioni and Passione, leading to the group attempting to find the Boss's daughter.

Sorbet and Gelato are two men of average heights and builds. Sorbet has dark hair that is gelled straight up with a large widow's peak

. He wears a long-sleeve collared dress shirt. In the anime, his shirt is tucked in and he also has a belt and suit pants.

The anime expands on their personalities. Illuso teases that they're a couple and might be getting it on somewhere since they were missing. Risotto Nero mentions that the two are motivated by money and that Sorbet specifically would never miss out on a chance to get rich. He always made sure to show up and claim his share after assassination missions. When the group realizes they must have tried discovering the Boss's identity, Illuso isn't surprised of the possibility since the two were crazy.[4]