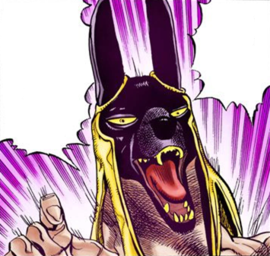 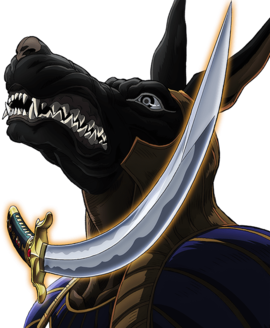 Destructive Power
B
Speed
B
Range
E
Stamina
A
Precision
E
Developmental Potential
C
A
B
C
D
E
A: Very Good
B: Good
C: Average
D: Poor
E: Very Poor
“
You have unsheathed me... you will be my Stand user... you will be my body. I will make you a master of the sword. No one is stronger than you... use me and kill!
”
—Anubis corrupting Chaka's mind, Chapter 193

It is a humanoid Stand resembling the god, Anubis, and bound to a sword. It is a Stand made to kill with an array of abilities allowing it to possess anyone and enhance their fighting abilities. Anubis is unique in being a userless Stand who obeys DIO and repeatedly tries to kill the Joestar Group's members in Egypt. 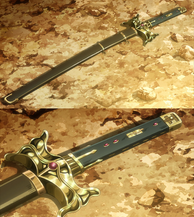 Anubis appears as an approximate version of the mythological Anubis it is named after, with a human body and a dark canid's head. Anubis is bare-chested but wears a headdress from ancient Egypt, a Nemes

; he also wears armbands in the anime adaptation.

Anubis is bound to a curved double-edged sword with an elaborate, jeweled-encrusted cross-guard complete with a scabbard.

Anubis gloating when Jotaro is wounded

Following the death of its original user, Caravan Serai, Anubis loyally serves DIO, both out of gratitude for freeing it and because it was defeated in battle by the vampire's Stand.[1]

Anubis is over-aggressive, entirely focused on killing people. It relishes fighting because it memorizes the techniques of its opponents to improve itself and is confident, with reason, that it won't lose to the same technique twice. It often encourages its victims to wield it by telling them that they are the greatest swordsmen in the world, but it won't hesitate to abandon them if they are defeated or the opportunity to possess a stronger user arises. Anubis is very persistant in trying to kill Polnareff and Jotaro, its nature as a sword-bound Stand allowing it to pass off as a simple object. Even then, once it is defeated, it memorizes the abilities of the opponent and grows in strength and speed to surpass them. Even against Jotaro, Anubis was confident that it wouldn't lose three times despite having most of the sword broken into harmless shards. On the other hand, Anubis completely respects DIO as The World has proven to be beyond its level. Thus, it swore loyalty to the only man whom it could never hope to surpass.

As with many of DIO's minions, it is prone to gloating when it seems to have the advantage against its enemies, which proved to be its downfall against Jotaro Kujo. When cornered or put in an extreme disadvantage, ie. a situation it can no longer control, Anubis is shown to be fumbling and comically panicky. It notably forgot not to phase through a wall as it was thrown towards the Nile, which contributed to its downfall. As it sunk to the bottom of the river, Anubis became so desperate it tried to cajole the fish and crabs into touching it, only driving them away by doing so. When its situation became hopeless, Anubis could only lament its loneliness.

It represents the Egyptian God, Anubis

, the god of the death in Egyptian mythology.

Anubis is an extremely dangerous battle-dedicated Stand whose multiple powers support him in direct combat and make him more formidable the longer he's fought. Although it has to possess someone first to fight, once unsheathed and wielded by an unwitting puppet, Anubis is capable of fighting Silver Chariot and Star Platinum toe-to-toe and could defeat either in a straight fight. Even without its powers, the sword is very sharp and Chaka was able to cut through a stone pillar with it.[2]

Anubis is a surprisingly resilient Stand. Even if the sword is broken, Anubis will simply remain active in the largest part of it, retaining its full power.[1]

Anubis is able to control whoever draws it, no matter how strong their willpower is.[3]

If someone unsheathes the sword, they will hear Anubis speaking in their mind, encouraging them to use it against all in their path. Eventually, they will be completely overtaken by Anubis itself, allowing the Stand to control their body. Even other Stand users are not immune to this effect - if Anubis controls them, it also takes control of their Stands.[4] Once Anubis leaves its host, they regain their senses, as Polnareff being freed from it demonstrates.[1]

Despite what Anubis tells its victims, it does not appear to improve their actual combat skill. Polnareff noted that Chaka wielded his sword like a complete amateur; conversely, part of Jotaro's difficulty in fighting Anubis was due to Polnareff's sword fighting experience, allowing him to wield his new sword in deadly tandem with Silver Chariot.

Polnareff is cut from behind a pillar

Anubis's oddest ability lets it manipulate where it slices along its blade.[3] For instance, when Polnareff hid behind a stone column, Anubis was able to slash him without damaging the column or even his victim's clothes.[5] It was also able to cut the hands of a person whom it didn't want to be drawn by, despite the fact that it was still sheathed in its scabbard.[3]

Anubis's most dangerous ability shown is to remember any attack that is launched against it and counter it.[6] This is truly deadly if it fights someone it has already fought with; the same tactics will not work on it more than once, no matter how well-planned out it is. This, combined with its ability to control people, means it can attack the same person repeatedly, wearing them down by constantly remembering their attacks until they have none left to use.[6]

Anubis can choose who will draw it from its sheath - it is impossible to draw the sword until Anubis is being wielded by someone it wants to possess. Even 3 grown men pulling with all their might won't budge it in this case.[3] This ability can apply to multiple hosts simultaneously, as seen when the Stand takes control of multiple rats,[6] though whether this extends to humans is unknown. Additionally, it can move itself to a limited extent without a user, being able to sheathe itself after its user was defeated and cut another person while still embedded in a victim's chest.

Anubis was created around 500 years before the events of Stardust Crusaders when its user, Caravan Serai, forged the sword it is bound to.[1]

500 years after its user and creator died, DIO found Anubis in a museum. Anubis swore loyalty to DIO after being defeated by The World and was eventually deployed to Egypt in an attempt to stop DIO's enemies from reaching his mansion.[1][3] 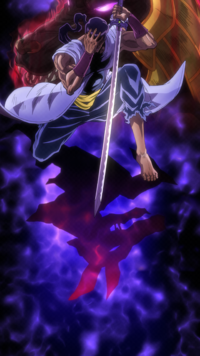 Anubis is first introduced when it is found by a farmer named Chaka, who then draws the sword out of curiosity and becomes possessed.[3] The possessed Chaka then cuts down his companions and eventually challenges Polnareff, who defeats Chaka after some struggle and takes the sheathed blade with him.[5] A barber named Khan eventually picks up the sword and also becomes possessed,[6] but is defeated by Jotaro. Despite being broken in two by Star Platinum, Anubis remains active.[7]

Later, Polnareff himself falls victim to Anubis when he accidentally unsheathes the sword while struggling with a passing policeman trying to take the sword.[7] With Polnareff as its host, Anubis gives Jotaro a difficult fight, especially when it influences Polnareff to wield its sword in tandem with Silver Chariot.[4] However, Jotaro eventually tricks the evil Stand into leaving itself open to a beating from Star Platinum, shattering the hilt and releasing Polnareff from Anubis's control.[1]

Anubis left at the bottom of the Nile

However, Anubis survives in the other half of the sword, possessing a child that picks it up from the street. Through its latest host, Anubis attempts to ambush the weakened Jotaro and Polnareff, but the child ends up throwing the blade past its targets when he trips over Iggy. After accidentally phasing through a wall in a panic, Anubis lands in a cow that thrashes its way into the Nile River, with its struggles causing the blade to fall from its flank and into the water. Anubis attempts to call out to the nearby fish and crabs to help it up, but nobody else takes notice of the sword, which presumably rusts to ruin and erases the Stand from existence.[1]