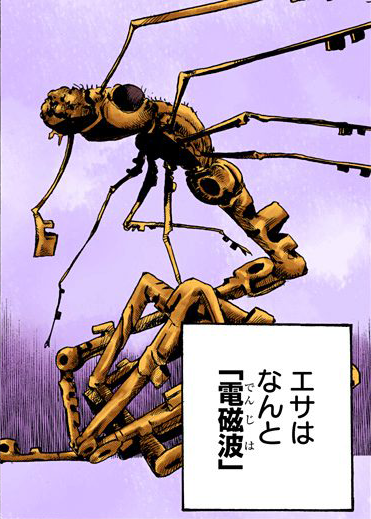 Coire electricus lorenzinia (コーイレ・エリクトリカス・ロレンチーニャ, Kōire Erikutorikasu Rorenchīnya) is a main antagonist in the one-shot Thus Spoke Kishibe Rohan - Episode 7: A Rainy Monday. It is a new species of insect that lives inside electronics and emerges to attack other creatures with weak hearts.

Coire electricus lorenzinia are extremely long worm-like insects with bendable robotic bodies that can flexibly fit inside circuitry. They have several circular pivot joints all over their body. Lorenzinia also have large eyes, a bumpy mouth, and long antennae and legs.

The series is known for alternating colors between media, the information presented below may or may not be canon.
Body(Bronze)
Eyes(Deep brown)

Lorenzinia is a parasitic species of insect that feeds on the bioelectricity of humans and other animals. They target individuals with weak hearts and manipulate others to help them pursue their target. They live inside electronics on the integrated circuits, which is also where they lay their eggs. They're harmless when there are just one or two of them, as they just eat power from cellphones. However, when there is a swarm of them, they emerge from the electronics to attack other creatures.[1] 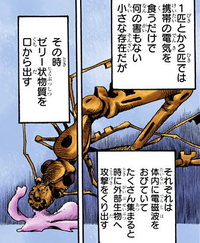 While living inside cellphones and other electrical objects, these insects feed on electromagnetic waves and store them inside their body. Once a swarm of them gathers, they emit a jelly-like substance from their mouths. Since the brain, heart, and muscles all work on electrical impulses, these insects can exert an unconscious influence upon people using their cellphones, manipulating them to bump into an individual who they determine to be their target.

The species originates from the urban areas of either Hong Kong or Shanghai. They are not publicly known to society, but the scientific community is preparing to announce the existence of these creatures to the world. 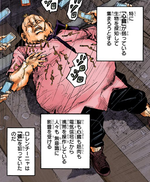 A swarm of these creatures live inside the cellphones of several citizens walking by in a train station at S City. They set their sights on an obese man with a weak heart, wanting to feed upon the bioelectricity in his body. They manipulate the passersby, making them bump into the man to push him off the railway platform. Those who are controlled by the insects mindlessly bump into others aside from their targets as well, such as Rohan Kishibe. Eventually, the insects cause several passengers to fall onto the train tracks, overwhelming the obese man.

With their target now in reach, the swarm of insects emerge out of the several cellphones and infest the man's body. They kill the man by harvesting his bioelectricity. As Rohan laments that he could not do anything to save the man, the insects move onto their next target, an elderly woman.[1]