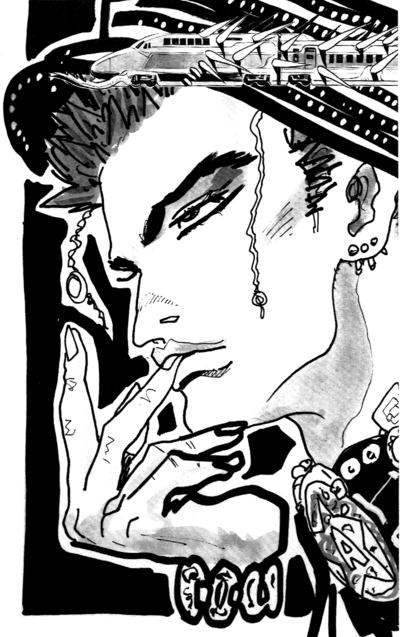 The Genesis of Universe
“
Greetings, allow me to welcome you aboard the Satanic Coupler, my sincerest thanks. Let me introduce myself. I’m the train driver and my name is Absalom. I shall take care of all of you until the end of the journey. I’m at your disposal for any request you might have.
”
—Absalom, The Genesis of Universe Chapter 1

Absalom (アブサロム, Abusaromu) is a primary antagonist featured in the light novel The Genesis of Universe, based on Stardust Crusaders. He particularly appears in the first chapter, "One-Way Trip from the Desert to Hell City".

Absalom is a Stand User and wields Satanic Coupler, a train-like Stand.

Absalom is a young man with brown skin coming from the native communities of the Egyptian desert. He has a strong jaw and short unkempt hair. Absalom wears a nondescript tunic but illustrations show that he also wears a dark hat and several jewels, notably bracelets, earrings and a necklace with a distinctive larger plate at the center decorated with a star.

Absalom carries with him great hatred and fixation with civilization, even willing to kill himself for a world without it. His Stand represents this hate and obsession, taking the form of the very thing he loved and killed his family: a train. When DIO promises to create a new world different from the civilized one, he even is capable of committing suicide to see this dream come true. That said, Absalom is quite protective of his sister Michal.

Absalom's Stand Satanic Coupler can solidify and displace matter in order to form a powerful train. It can read the memories of passengers present in the train to enhance itself based on what the passenger thinks trains are like. For example, the Stand gets a ferocious appearance because Iggy thinks trains are monstrous.

Absalom was raised in the deserts of Egypt, but was ashamed of the uncivilized life he had. In his childhood he was attracted to civilization, particularly to trains (even dreaming of driving one), and believing that "the human being can only find happiness in a civilized society". However he became disappointed even with the civilized men and began hating civilization four years ago when his parents died during a family trip in a train accident in Cairo. In that accident, his sister Michal lost her voice because of throat injuries. What shocked him the most is that the inhabitants only helped those they knew and the wealthy first, leaving him and Michal last because they were from the desert. Disillusioned with civilization, he and Michal then met DIO who healed Michal and convince Absalom to work for him. They both pledged loyalty to DIO, as he promised to create a new world different from both the desert and the civilized ones if the Joestar group is killed. His Stand, Satanic Coupler, represents his fixation and hatred with civilization.

The Joestar group, exhausted from the Nubian Desert's heat, suddenly encounters Absalom, who presents himself as the driver of the "Satanic Coupler" locomotive and offers refuge for them inside it. Revealing the train to be his own Stand, Absalom confines them in it, planning to push the group from hope to despair with enclosure. Absalom tries a suicide attack, planning to destroy his own Stand with everyone inside, but Jotaro Kujo, Jean Pierre Polnareff and Iggy use their wits to escape, foiling his plan. After the defeat of his sister, Absalom confronts them again in his hideout close to an oasis village, his hometown. Because his attack involved a boy from the village, he soon faces the wrath of a furious Jotaro, who discovers his Stand's weakness and hammers it with a barrage of punches thanks to a plan made by a recently rescued Joseph Joestar. His last attempt of resistance is to shrink his Stand and sneak it into Avdol's body, but lost to the also smaller Hierophant Green and Star Platinum and becomes incapacitated. Villagers later mistake the Joestar group as bad people and rescue Absalom, who decides to live with them peacefully.[1]