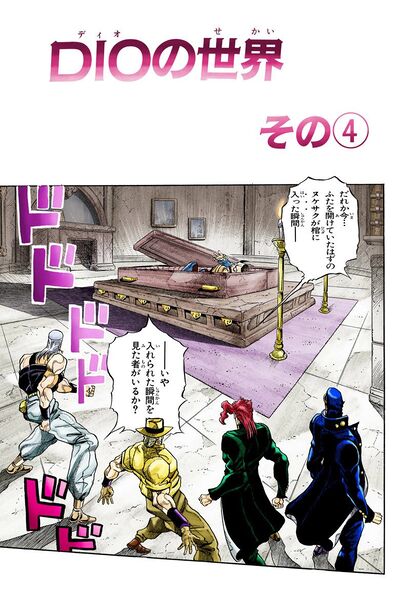 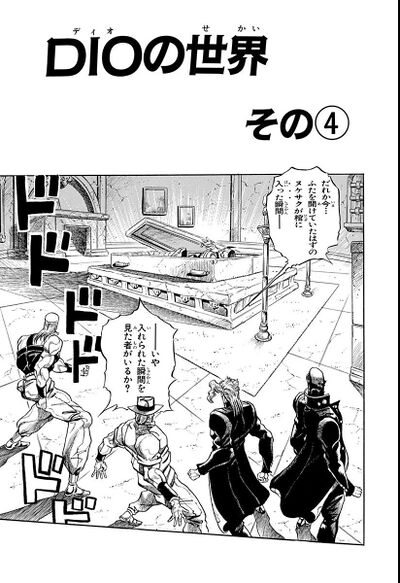 DIO's World, Part 4 (DIOの世界 その④, DIO no Sekai Sono 4), originally The Time Has Come! (ヤツの時間がきた！, Yatsu no Jikan ga Kita!) in the WSJ release, is the one hundred thirty-seventh chapter of Stardust Crusaders and the two hundred fiftieth chapter of the JoJo's Bizarre Adventure manga.

Confused and frightened, the group leaps from the open window of the tower when Jotaro feels the bloodlust of DIO begin to creep up on him, utilizing their Stands to land safely on the lower roofs of the mansion.

Just then the sunset becomes imminent, and although Joseph reasons that they must go on the defensive to survive the inevitable onslaught DIO will bring now that the situation is in his favor, Polnareff refuses to run any longer and leaves the group to pursue DIO on his own.

Joseph buys a truck with which the two flee, while DIO contemplates the advances in vehicular technology since his time as he forcefully enters the car of a wealthy politician and coerces him to drive.