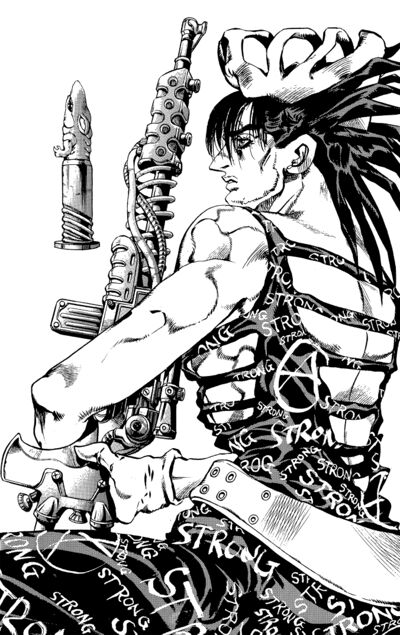 Rigatoni (リガトニ) is a secondary antagonist featured in Golden Heart, Golden Ring, the light novel based on Vento Aureo. Rigatoni is an assassin on Sogliola Lopez's payroll and a Stand User using the sniper rifle Public Image Limited.

Rigatoni is an aging Italian man with a lean but muscled body. He has long dark hair combed into large unkempt spikes and an unkempt beard, with white hair here and there. The man has "rough features" and is drawn with a strong face.

Rigatoni wears a dark bodysuit leaving his arms uncovered and missing large stripes of clothes; in addition the suit is covered in inscriptions of the word "strong" as well as a the anarchy symbol. He also wears a large oversized belt, gloves, as well as a peculiar hat made of stripes of cloth.

The assassin carries with him an elaborate sniper rifle with whimsical features.

Rigatoni is a professional assassin with an appreciation for battles.

As an assassin for Passione, Rigatoni is a consummate professional, claiming that an assassin who cannot finish off a target might as well be dead. When he was partnered with Guido Mista, he disparaged him when he failed to assassinate one of their targets.

Despite his animosity with Mista, Rigatoni has an appreciation for the latter's own prowess. He came out of retirement specifically to fight and kill Mista and was ultimately impressed by how Mista outwitted him, thinking he didn't feel bad being killed this way. Rigatoni himself considers that he must take risks to live an exciting life, explaining his calm as he uses his Stand Public Image Limited which runs the risk of killing him if he misses.

Being an old assassin, Rigatoni has a hidden melancholic side. During one of his jobs, Rigatoni took the time to give his respects to a target who happened to be his friend and stated that they would be together soon enough. As he died, Rigatoni also though that he had lived long enough already.

Public Image Limited is a Stand ability that allows him to power up his bullets and absorb the Stand energy of anything it hits. As a trade-off, Rigatoni loses all his energy when hitting someone so he must always hit his target to absorb their energy and survive.

Rigatoni is a superlative sniper, well accustomed to using his rifle to kill his targets. Among his feats are purposefully shooting targets in non-lethal ways from the top of a tower. Even more, Rigatoni can observe bullets and accurately predict their paths, or even shoot bullets aimed at him mid-flight.

Rigatoni is a hitman who specializes in assassinating Stand users, and as such very few in the entire organization know of his existence. He is feared and known as the "Stand Killer". Once, Rigatoni partnered with Guido Mista to assassinate the rebellious right hand man of the Boss, having to partner with Mista in case the target wasn't a Stand User. Rigatoni saved Mista on that day, humiliating the young man. Rigatoni and Mista continued to be paired but also had violent arguments regularly. Their partnership ended after a botched mission to assassinate a woman. The woman, who wasn't a Stand User, should have been eliminated by Mista but she escaped. The pair argued and Rigatoni left.

Prior to the events of the novel, Rigatoni had retired. However, he took up a request from Sogliola Lopez this time in order to have a showdown with Mista.

Rigatoni posted himself at the top of the bell tower of St. Mark's Basilica, waiting for Team Bucciarati to be hounded to the place where he can snipe them. Mista shot first, boosting a bullet by shooting it midair and almost hit Rigatoni but the assassin merely tilted his head to avoid the bullet, which grazed him instead. Rigatoni then dodged three other bullets. Mista then reloaded and Rigatoni took this opportunity to shoot. However, Mista shot a bullet touched by Gold Experience, which turned into a bat. Rigatoni's bullet shot through the bat, which thanks to Gold Experience's ability returned the damage to Rigatoni. Rigatoni died, with a hole punched through his chest.