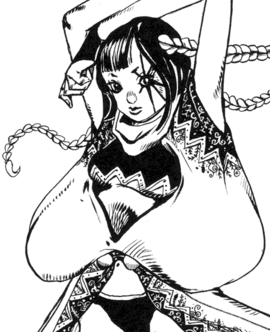 Purple Haze Feedback
“
I can't fight someone if I think they're more 'right' than me. That's my limit. But there's so many things in this world that can't be separated into right and wrong. If I was ever in a place where I had to decide to betray someone or not to betray them... I don't think I could keep following.
”
—Sheila E, Purple Haze Feedback Chapter VI

As one of Giorno Giovanna's personal bodyguards, she is sent to assist Pannacotta Fugo on his mission to eliminate Passione's former Sezione Droghe.

Sheila E is a young and svelte Italian girl. She has long dark hair, a part of which is tied into several long, lighter colored, braids. An eight-pointed scar covers her left eye.

Sheila E wears a brassiere and underwear under a large loose coat connected only around her stomach. She also wears baggy leggings made from the same cloth, but lacks any footwear. Her outfit is covered with a triangular wave design reminiscent of Native American motifs.

Sheila E is introduced as a frank teenage girl. She doesn't chew her words and harshly criticizes Fugo for abandoning his team. Despite her indiscipline, it seems she fulfilled her role well as liaison between Passione and Squadra Esecuzioni. Sheila E prefers to take the most direct solution to any problem, typically destroying anything inconvenient.

Sheila possesses a strong moral code, hating evildoers and worshipping charismatic moral people like Giorno. After Illuso killed her sister, Sheila infiltrated Passione, planning to kill Illuso while also asking for permission. Consequently, she feels that she owes Giorno for killing Illuso and obediently follows his command. Because of her manichean view about right and wrong, Sheila has a psychological limit in that she cannot bring herself to attack someone she deems "more right" than she is.

Taking failure poorly, Sheila E has a tendency to place herself further into danger to atone for any perceived failure on her part.

The E in her alias stands for "Erinni," the Italian name of the Greek goddesses of revenge.

Sheila E’s Stand, Voodoo Child, allows her to make lips on any surface and replay a sound or thought. In addition, it is a rather powerful Close Range Stand.

Sheila E has a keen sense of smell, and can differentiate between individuals based on their scent. It is mentioned that she learned to do this in her childhood while she played with her dog, Toto.

Sheila E joined Passione in order to get revenge on Illuso, who killed her sister, Carla. A merciless fighter, she crushed the Miranze gang at 10 years old, taking their casinos in Rome for Passione. For this deed, she was chosen to be one of The Boss's bodyguards. When Giorno Giovanna tells her how Illuso died, she accepts it as a just punishment, and feels a deep sense of debt to Giorno, becoming one of Giorno's bodyguards.

She was in contact with the assassination team, even though contact between teams is normally forbidden, so she is sent on the mission to take out the drugs team alongside Pannacotta Fugo and Cannolo Murolo. After a formal meeting, the trio go to Sicily.

In here, Sheila is lured away by Mario Zucchero, only realize that he's a decoy. She returns to her group, currently under the spell of Vladimir Kocaqi's Stand. Kocaqi defeats Sheila E by locking her feelings of being unable to beat him, but Fugo manages to kill Kocaqi nonetheless.

The group then pursues the Sezione Droghe to Syracuse in which Nightbird Flying causes their helicopter to crash, but she at least rescues Fugo from drowning in the sea. As Night Bird Flying causes more mayhem, Sheila E abandons a doubtful Fugo and tries to confront the Sezione Droghe on her own although Massimo Volpe easily defeats her. Taken hostage, Sheila E is saved when Fugo gathers the will to confront Volpe and defeats him.