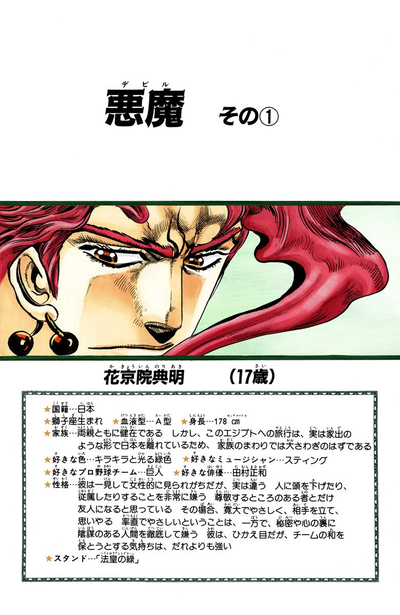 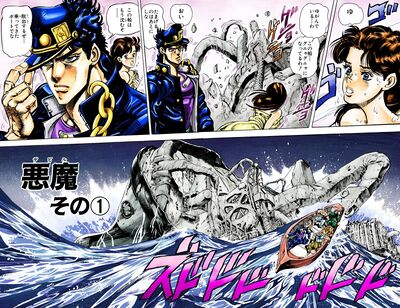 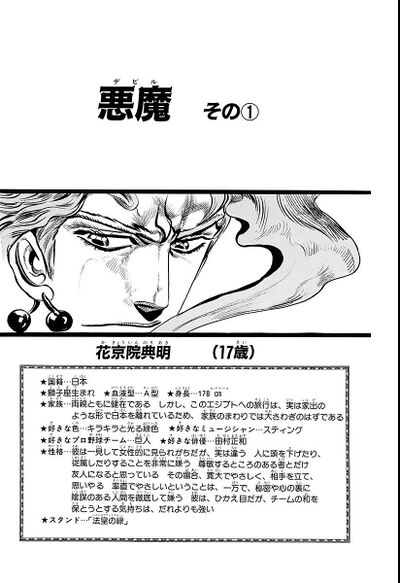 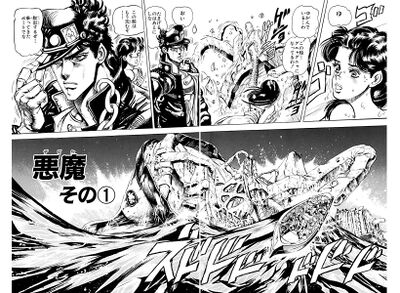 Devil, Part 1 ( その①, Debiru Sono 1), originally The Devil in the Refrigerator (冷蔵庫の悪魔, Reizōko no Akuma) in the WSJ release, is the twentieth chapter of Stardust Crusaders and the one hundred thirty-third chapter of the JoJo's Bizarre Adventure manga.

After Forever's death, Big Daddy crumbles since the Stand doesn't power it anymore and sinks. The group, who has joined the lifeboat, wonders how an ape could have such a powerful Stand, which would have killed them if not for Jotaro. Joseph wonders if they will find more enemies as powerful as the orangutan.

The group then somehow makes it to Singapore. It has been 4 days since they left Japan.

Polnareff is confronted by an officer about his luggage, which he mistakes for garbage. Polnareff scares the guard by facing him, and it is then that the group notices the runaway girl is still following them. She tells them her father is going to meet her in 5 days, so she can go wherever she wants until then. Worried about the girl's safety, the group agrees to let her accompany them.

They stay at a hotel, where Polnareff is attacked in his own room by Devo the Cursed. The strange enemy's attempt at ambush is seen through by Polnareff and then tries to attack him, only for Silver Chariot to heavily wound Devo, the Stand Ebony Devil hardly doing anything. Devo still laughs maniacally after being hit by Polnareff and runs away, declaring that his Stand feeds on hatred and grows more powerful when Devo hates his target. Polnareff's ankle is suddenly and mysteriously cut.