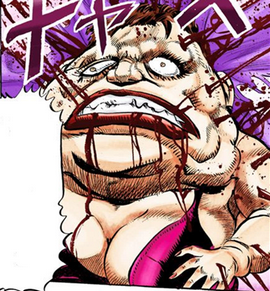 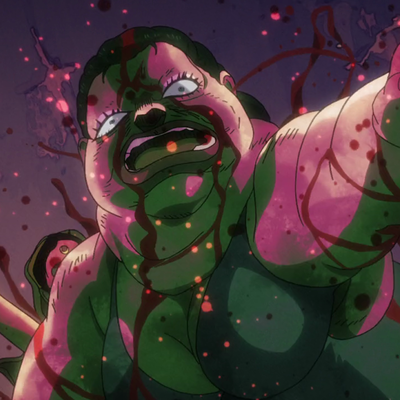 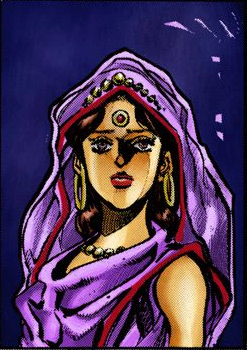 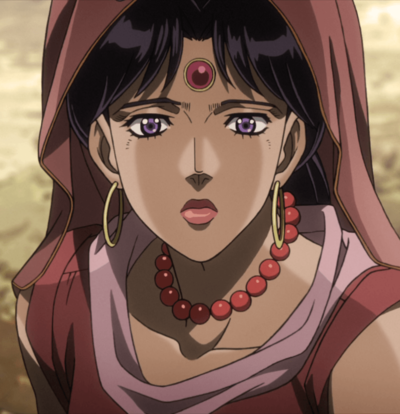 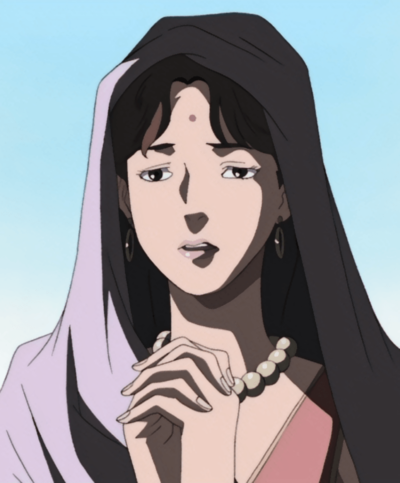 Heritage for the Future
“
An ugly woman like her... she used her Stand to assimilate other people.
”
—Joseph about Nena, Chapter 149

She first appears in India alongside Hol Horse and tries to assassinate Joseph Joestar while passing as an ordinary woman. She is a Stand User who uses Empress.

Nena first looks like a beautiful young Indian woman in typical Indian attire. However, this is merely a disguise, and Nena is truly a short, ugly, and overweight woman wearing a bikini. Nena also possesses a bud on her tongue.

Disguised, Nena has a bindi on her forehead and wears an ankle-length, sleeveless dress and a headscarf, along with plenty of jewelry such as a pair of looped earrings and a bead necklace.

The series is known for alternating colors between media, the information presented below may or may not be canon.
(Disguised)
Skin
(Tan. Magenta and golden Bindi, red lipstick.)
Hair(Brown)
Eyes(Brown)
Outfit
(Lavender robes and hijab with a red trim, golden jewelry.)

Nena is a devious servant of DIO.

Not much is known about Nena but most of the things she's seen doing indicate a twisted personality. She is an assassin at DIO's service and Enya the Hag notes that her Empress's specialty is to slowly kill her victims.[2] Nena also hides her true form by wearing the skin of another, prettier woman and uses her good looks to trick her targets into thinking she's an innocent woman and approach them to plant Empress in them. Nena also keeps this habit in presence of potential allies.

She's initially introduced as a young Indian girl pretending to be in love with Hol Horse[3] to the point of wanting marriage. She uses her "relationship" with him as a means to infiltrate the Joestar Group and later charms Polnareff as a distraction while trying to assassinate Joseph Joestar.

Nena's Stand, Empress, is a parasite Stand that grows from the flesh of its victim.

It represents the Tarot Card "The Empress", which symbolizes fertility. "The Empress" card often puts emphasis on motherly qualities, like the creation of life, and it is thought to signify physical attraction and luxury. Nena's luxury can be seen through her crush on Hol Horse and later attraction towards Polnareff (even though she was only faking the latter). Her Stand, Empress, refers to her fertility by growing as it eats, similar to a real living being. It also refers to its host as "daddy", though in a mocking manner, as if it was the fruit of a relationship.

Nena is an obese, unsightly woman from an aristocratic family hired by DIO to intercept and kill the Joestar group. Nena used her Stand Empress to kill a beautiful young woman and wore her skin to hide her true form. She eventually falls in love with Hol Horse to the point of wanting to marry him. The two become allies and lovers, though Hol Horse takes advantage of her as she was willing to do anything for him.

Nena is initially portrayed as an ally and lover of Hol Horse, an enemy of the protagonists, but is not shown to be a true enemy herself. She shows interest in marrying him but he denies her marriage offer claiming he is a traveler destined to die on the street and couldn't stay with her even though they loved each other. He later reveals to J. Geil that he is with her just because she could be useful in the future, sacrificing her life for him.

After Hol Horse is defeated she eventually comes to his rescue, holding down Jean Pierre Polnareff while Hol Horse escapes from Jotaro's team. She then accompanies the group on a bus they take to Varanashi, and it is then that Polnareff becomes attracted to her while she hides her actual identity as a Stand User, and attacks Joseph Joestar with her Stand.

Nena then exploits Polnareff's interest in her to distract him while her Stand fights Joseph. After Joseph is able to deal the finishing blow to Empress, Nena takes the damage and dies, revealing her real form.

Polnareff appears traumatized as she is killed in front of him, realizing she is an enemy (and a very ugly enemy at that). This has led to comical scenes as the rest of the Crusaders try to bring him back to his senses.

Nena's disguised form appears in the OVA, but her role as an antagonist is excluded. As such, she only appears to allow Hol Horse to escape.