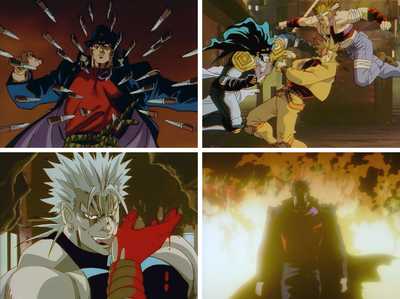 DIO's World: Farewell, My Friends (DIOの世界 -さらば友よ-, DIO no Sekai -Saraba Tomo yo-) is the thirteenth and final episode of the JoJo's Bizarre Adventure OVA. It adapts Chapter 256 through Chapter 265 of the manga.

Jotaro and DIO's fight is about to begin. Joseph still agonizes from his wounds. Star Platinum and The World's clash devastates the street, but DIO has a clear physical edge. Amused, DIO stops time to finish off Jotaro but again Jotaro manages to survive punches from The World. When DIO attacks again, he realizes that Star Platinum can move in the stopped time, protecting its User. It then sends DIO flying. Jotaro begins to understand Star Platinum's power too.

Stopping time repeatedly, DIO sees that Jotaro can move to a point. To test Jotaro, DIO unveils dozens of knives and traps him midair, throwing his knives from all directions. Despite Star Platinum's speed, several knives hit their mark and Jotaro falls down into the concrete.

Jotaro has survived the attack thanks to the splinters on his chest but must play dead to lure DIO close to him. However, DIO is prudent and Jotaro must even stop his own heartbeat. Nonetheless, DIO rips out a road sign, intending to use it like a halberd. Thankfully, Polnareff intervenes and drives Silver Chariot's sword in DIO's brain. Jotaro is thus able to punch DIO's head. Letting Polnareff rest, Jotaro approaches DIO and pummels him but DIO is sent right next to Joseph's corpse. Sucking his blood, DIO has now healed completely.

Having reached the height of his power, DIO desecrates Joseph's corpse, angering Jotaro further. A violent fight ensues and although Jotaro is empowered by his wrath, DIO can stop time to up to nine seconds while being crazed with insanity. Jotaro is dominated completely until he lands on a bridge. DIO stops time and prepares for a last attack. DIO tries to crush Jotaro beneath a tank truck but Jotaro then stops time, evading death and immobilizing DIO. Star Platinum violently kicks DIO in the knee, making him fall. As a last-ditch attempt, DIO spurts blood in Jotaro's eye and tries to make The World kick his head off; thankfully, Star Platinum punches The World's leg and makes it explode in two alongside its User. Jotaro has definitely won.

Afterward, Joseph has revived thanks to transfusion. DIO's corpse is thrown into the red sea, and the surviving Joestars reminisce their fallen comrades. Later, Jotaro, Joseph and Polnareff have a last goodbye at the airport. Meanwhile, Holy has fully recovered and awaits for Jotaro and Joseph's return.