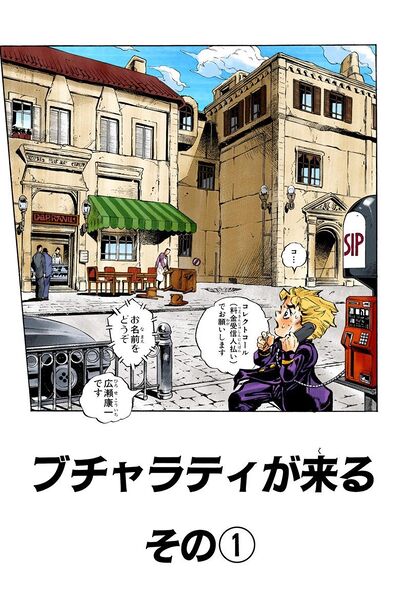 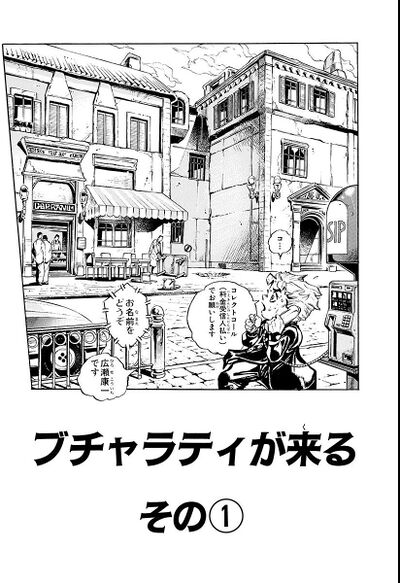 After his fight with Giorno, a panic-stricken Koichi calls Jotaro to inform him that Giorno is a Stand user, and that the 'Haruno Shiobana' that Jotaro was looking for is in fact Giorno Giovanna, explaining how he was robbed by the teenager. From his brief encounter with Giorno's Stand, Koichi is able to tell Jotaro that said Stand has the ability to reflect opponent's attacks back at them. Koichi expresses his urge to leave back to Morioh given the apparent danger of the mission, to which Jotaro apologises for, sharing how he'd only considered the possibility pf Giorno being a Stand user.

Then, out of curiosity, Koichi asks what Jotaro's relationship with Giorno is. Jotaro pauses, looking over an old photograph of the Crusaders as they arrived in Egypt. He then bluntly replies that he killed Giorno's father, Dio Brando, going on to explain the true objective of collecting a skin sample of Giorno: to confirm whether Giorno he was truly DIO's son. Koichi recognises DIO as the man behind the Bow and Arrow, his body being a part of the Joestar bloodline. Having learned that Giorno had inherited a Stand from his father, Jotaro warns Koichi that he need no longer approach the teen. Furthermore, Jotaro notes how Giorno's sudden hair change from black to blond may be a result of his Stand ability only have awakened recently, deducing how this could be due to the presence of another powerful Stand user nearby.

As a final question, Jotaro asks for Koichi's opinion on whether Giorno is impressionably an enemy or an ally. Koichi answers by calling him bizarrely serene.

Meanwhile, Giorno rides in a funicular, when a young man suddenly appears, picking up a fallen coin and asking Giorno if it belonged to him. Giorno says it isn't, prompting the man to keep the coin and ask: if there was a bag lying on the funicular with 100,000 Euro inside, would Giorno return it? Giorno laughs, exclaiming that he would of course take the bag himself. The man laughs along, calling Giorno honest, before modifying the question a bit: what if the man was a policeman in disguise and caught Giorno in the act? With a stern face this time, Giorno says he'd give the policeman half of the money, asking him to stay quiet. The man laughs greatly to this, noting how Giorno really isn't kidding. As he exlains, he knows this as he supposedly has the ability to tell if someone is lying or not based on the sight and taste of their sweat. Unsure of how to respond to such a claim, Giorno asks who the man is.

Instantly changing to a serious manner, the man explains how he is looking for the man that killed Leaky-Eye Luca, after his body was found where Giorno had left it. Giorno says nothing, and only stares unfazed as the man attempts to read his face. The man goes on to explain how some airport security had said Giorno was at the airport at the same time as Luca, hence why he was being questioned. Giorno initially responds with a question of his own, asking whether the man is a cop. The man scoffs at this, hinting that Luca was more than just a thug, but rather part of something bigger: a gang. He also puts emphasis on the existence of a related boss, saying that he was assigned to find Luca's murderer on the boss's orders.

This time, he asks Giorno directly: did he meet Luca at the airport? Giorno, stern as ever, denies ever hearing about such a man as 'Leaky-Eye Luca'. After another intense stare-down, the man declares that due to a lack of sweat from Giorno, he must be telling the truth, apologising about the inconvenience and heading to leave. However, Giorno confusedly opens left-fist, which had been closed moments before, finding none other than Luca's eye in his open palm. Completely shocked, Giorno shakes his hand away, exclaiming and breaking into sweat. The man from before suddenly appears from the window behind, licking Giorno's face, deducing that the taste of his sweat confirms that he is lying.