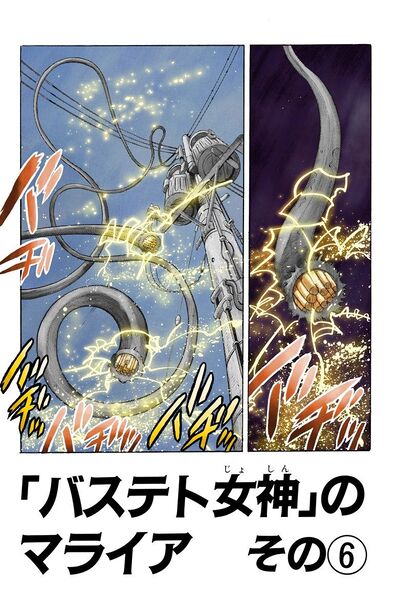 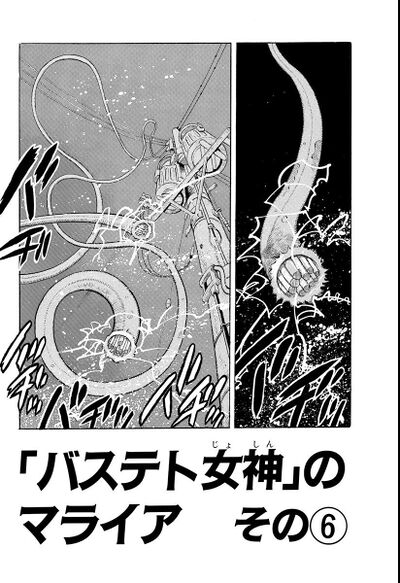 With his magnetic attraction stronger than ever, Joseph is unable to move with so many metallic objects joined to him thus making it impossible to dodge the incoming high voltage cables. The cables attract to the two magnetic men. Avdol is able to melt them with Magician's Red, but Hermit Purple isn't strong enough to keep them away from Joseph. Avdol tries to attack Mariah, but a truck attracts to him and pins him down. With Joseph barely hanging on to life Mariah begins mocking him, stating that if he were younger he would have made a great lover. Joseph begs her to save him, but she refuses to deactivate her Stand. Joseph replies that by doing so she has lost the battle. At that moment Joseph rises into the air and is pulled towards Mariah. The same with Avdol as the two massive magnets collide with Mariah in the middle. Now that their intense fight is over the two men decide to go eat breakfast.

Meanwhile, Jotaro and Polnareff continue to wait for Avdol and Joseph as they had all planned to eat breakfast together. After looking at his watch, Jotaro realizes that the others are suspiciously late. Worried that they were attacked the two along with Iggy decide to look for them. As they walk, they do not notice the bizarre looking man following them. While following them, a child runs into him, dirtying his pants. After smacking the child the bizarre man, announcing his name as Alessi, continues to stalk Jotaro and Polnareff.