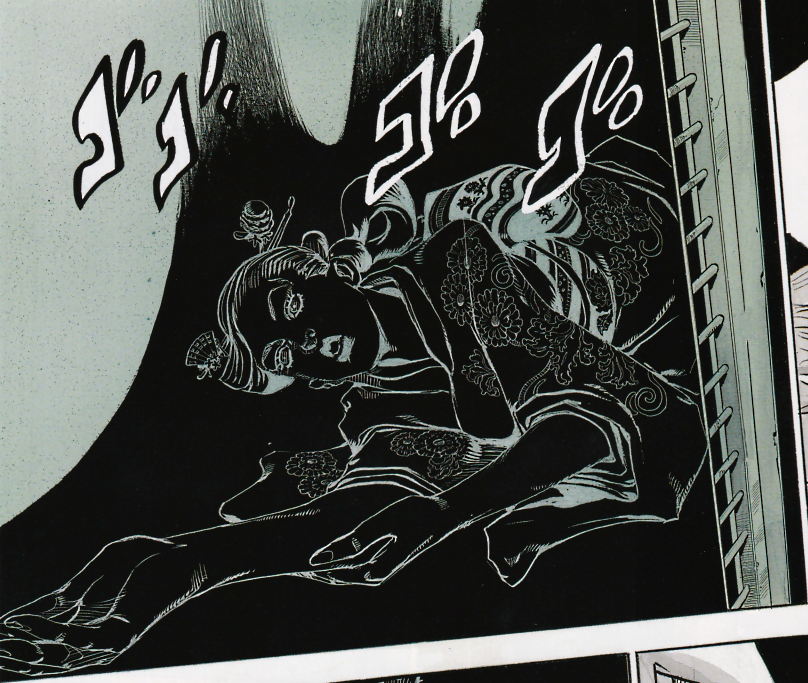 Under the Moon (月下, Gekka) is the main antagonist of Rohan at the Louvre. It is a painting created by the Japanese artist Nizaemon Yamamura around the 17th century. It depicts a portrait of the late Nizaemon's wife, Nanase Kishibe, made entirely out of the blackest and purest ink in the world, taken from the pigment of an ancient tree's trunk.

The pigment that Nizaemon extracted from the 2000-year-old tree came from a substance drawn from insects living in the very core of the trunk. These infinitely black creatures, resembling spiders, were hidden in the darkness since the dawn of time and are now bound to the painting. Thus, the painting is actually "alive", attacking whoever approaches it in response to Nizaemon's hatred.

Under the Moon is a black painting portraying Nanase Kishibe in white ink on a black background. She is wearing a kimono and lying on her side with her mouth open. Her left hand holds her elbow while her right hand is stretched out with her palm open, as if she is reaching out of the painting.

“
It's that black painting that's attacking us! It's alive!! It's using the hatred of our kinfolk... For no one in the world can escape the bonds of blood! That painting has absolute power!!
”
—Rohan Kishibe, Rohan at the Louvre

Spider creatures living within the painting

Since Nizaemon used that particular pigment for his canvases before being executed, his hatred becomes forever locked into the paintings. Cursed by his hatred mixing with the substance from the insect creatures, its paint can detect any nearby lifeform who approaches it by sensing the heat or breath of life. It attacks them through their memories and genetic memories, conjuring their ancestors or other deceased individuals from their memories as ghost-like creatures to attack the victim.

If the victim touches the ghost, they will experience the same death as whoever they touched. For example, if someone touches a person who drowned, their body will also experience drowning even if there is no water around them.

Around the 1700s, Nizaemon discovers this pigment and uses it for his paintings by cutting down the ancient tree, unaware that it is forbidden by decree to do so. As punishment, Nizaemon is executed just after his wedding with Nanase. Having been forced to become a widow, Nanase becomes gravely ill and dies soon after. The hate in Nizaemon's heart for meeting such a fate is transferred and sealed in the painting, giving it life and a murderous intent. Consequently, Nanase is cursed to kill people for 300 years as part of the painting in hopes of eventually sealing the curse away using a descendant by cutting her link to said descendant.

Although all of Nizaemon's works were burned after rumors of them being cursed, he managed to hide Under the Moon in a safe location before his death. A landowner in Nanase's hometown finds the painting in the back of his barn, and then a curator from the Louvre takes it to the museum in 1989. The curator ends up being killed by the painting.

The painting does not go on display in the museum and is instead hidden within the Z-13 warehouse, part of the far eastern section in the Asian Art department of the Louvre. Gaucher reveals that the Z-13 warehouse had actually been closed off and abandoned since 1976. Curious about what lies there, Gaucher, Noguchi and two firefighters decide to go investigate the area with Rohan. As soon as they approach the painting, everyone accompanying Rohan dies from the painting's curse. Rohan is nearly killed by his grandmother and other ancestors as well, but uses Heaven's Door to momentarily erase his memories to escape from the curse.

After a thorough, scientific examination of the painting by experts following the disappearance of staffers who approached it, it is rumored to have been burned. However, Rohan cannot confirm whether this is true.[1]