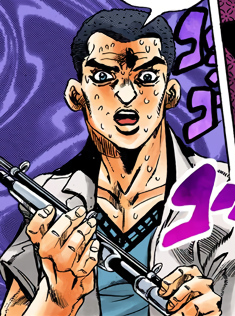 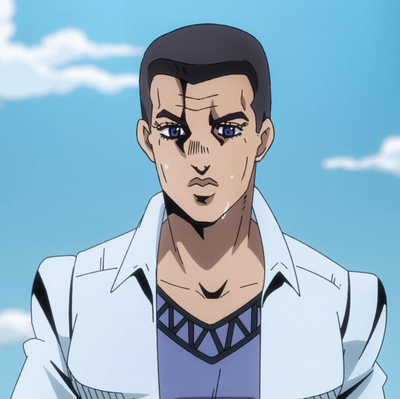 He is a kindhearted fisherman and the father of Bruno Bucciarati. After accidentally witnessing a drug dealing transaction between gangsters and getting harmed as a result, his son eventually becomes motivated to stop drug trafficking in Italy.

Paolo has short flat dark hair, wrinkles on his forehead, and thick eyebrows. He wears a light collared t-shirt on top of a V-neck shirt, which has a lace design on the top.

Paolo is not a social man, but he is an honest and diligent fisherman. He did all he could to protect his family from the cruelties of the world. Hoping his son would be able to go to a nice school in the city, he zealously fishes and allows other fishermen to ride his boat on his off days to afford the tuition.[2]

In 1987 during his tenth year of marriage, Paolo and his wife decide to get divorced. Their son was seven years old at the time. When talking with their son about who Bruno would live with, his wife led the conversation while Paolo didn't say a word. However, Bruno decided to live with his father, shocking both of his parents. The young boy knew his father would be the saddest about the separation.

Paolo originally thought his son would become a fisherman like him when he grew up, but after the divorce he hopes Bruno would go to a nice school in the city, so he works diligently to afford Bruno's tuition. He begins taking tourists and other fishermen on his boat whenever he had time to spare.

One day in 1992, two visiting fishermen ask Paolo if they could ride his fishing boat to an islet off the coast of Naples. The anime includes a scene with Paolo telling them that the island isn't good for fishing, but the men stubbornly tell him to take them. He thinks that one of them is an idiot when they leave their fishing rod on the boat. Paolo kindly goes to deliver the rod to the group and witnesses a drug deal. The men shoot him multiple times and seven bullets pierce his arms, shoulders, chest, and torso. He is left for dead by the thugs but is luckily saved by a coast guard ship that just happened to be passing by. They administer first aid and take him to the hospital. Although Paolo was unconscious, he survives the trip to the hospital. Later that night, the gangsters sneak into the fisherman's hospital room and attempt to finish him off. However, the young Bruno murders them before they could strike.

Bruno joins Passione in exchange for his father's protection. Five years later in 1997, Paolo eventually dies from complications related to his wounds regardless. Bruno soon ironically discovers that the boss of Passione was the source of the drugs in Italy.[2]