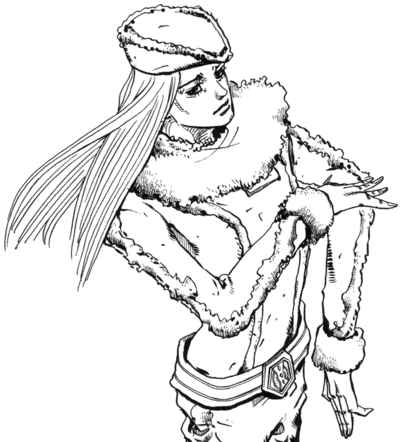 As the lead developer of Passione's Sezione Droghe, Volpe was primarily responsible for creating the drugs the Boss would sell to addicts and children. He later becomes the archenemy of Pannacotta Fugo, who is assigned to assassinate Volpe to reclaim Giorno's trust.

Aside from being the most wanted man of Sezione Droghe, Volpe is also a Stand user who wields the deadly and versatile Manic Depression.

Volpe is a tall Italian man described as having an angular and bony build, making him look Irish. He has a thin nose, eyes and eyebrows.[3] He has unfocused eyes and dark rings under them.

He has long, straight hair, and wears a hat with fur trimming. He appears to wear a one-piece suit with shoes that meld into it. He also wears a belt with a large buckle featuring a rectangular shape in it with three circles.

The outfit's fabric is generally plain, but features many trimmings of fur, namely along his outer arms, the sleeves' cuffs, and two sections extending from his belt to his collar, which is entirely fur. Below the collar, in the center, appears to be a handle of sorts.

Beneath the belt, his legs also have fur trimming, where circlets containing tassels hang.

Since he was born, Volpe lives an extremely apathetic, uninspired life, often not making a big deal out of anything simply because he does not feel deeply about anything, lacking any passion. This leaves him rather close-minded and lackadaisical, but develops considerably violent mannerisms after joining Passione's Sezione Droghe.[6]

However, he is extremely resentful of others, sometimes without even knowing them well, most notably his elder brother and Pannacotta Fugo. The general exception to his seemingly careless nature is the Sezione Droghe, acting somewhat as a guide for Angelica Attanasio and Vittorio Cataldi. Vladimir Kocaqi expresses great faith in Volpe's abilities, claiming he could rule the world with them,[7] but Volpe doesn't believe him. Nonetheless, he loyally goes along with Kocaqi's leadership, being particularly distraught after the man's murder.[8]

Further, he shares a uniquely caring relationship with Angelica, voluntarily using his Stand to alleviate the pain of her chronic illness with its effects.[3] After witnessing her death, Volpe loses emotional control of himself, going to significantly violent lengths to draw Fugo out in order to kill him and avenge both of his teammates' murders.[5]

Volpe's Stand is Manic Depression, a miniature Stand capable of increasing the biological functions of organisms.

Massimo Volpe was born into a formerly wealthy family, filled with aunts and uncles with no blood relation to him due to many selling their own titles to bourgeois merchants for large sums of money. His father treated these people with deference in public, but contemptuously dismissed them as new money in private.[5]

His elder brother, Antonio Volpe, was to inherit all the money acquired, but he suddenly left to become a chef, now leaving Volpe with the inheritance. The brothers' father greatly disapproved of Antonio's decision, clinging onto traditional values of the wealthy and hating the thought of having a nobleman of his blood partake in a trade like cooking. When Antonio couldn't be dissuaded from pursuing his career, his father disowned him.[5]

Saying his goodbyes, Antonio apologizes to Volpe for how everything was now on his younger brother's shoulders. He pleads with Volpe to not hold it against their father, trapped in his ideals of class. He acknowledges that it won't be easy for Volpe to deal with, but voices his faith that Volpe can manage. Volpe questions what Antonio will do from here on, and Antonio answers that the only thing he can do is train. As Antonio is a former aristocrat, no chef in Italy would take him seriously, so he'd have to leave for a different country and cook food he's proud of. He determines that he will discard the Volpe family name, taking their mother's maiden name: Trussardi.[5]

Volpe doesn't see why his surname would matter, but Antonio clarifies that it would matter to their father. Volpe points out that Antonio hated their father enough to leave, so he doesn't understand why he should bother caring what their father thinks. Antonio counters by saying that this affects Volpe as well, as he carries Volpe's surname and the burdens with it as long as he cares to. Smiling thinly, Volpe says that what happens happens, but that he knows nothing will happen. Disturbed, Antonio asks if Volpe has anything he wants. A dream. Skeptical, Volpe sneers at the thought of having a "dream", ridiculing Antonio's own dream of wanting to cook food that would better the lives of others. He rattles Antonio by finally calling him by his nickname, Tonio, something he never did before.

Tonio tells Volpe that he needs to look after himself. Volpe dismisses him, saying he gets it, but Tonio insists that neither he nor their father understands where Tonio comes from. The former laments at the world's events, but Volpe ignores them altogether. This is the last thing Tonio says to Volpe before leaving. Just a few years later, the Volpe family's debt accumulated significantly, and Volpe joined Passione. Meanwhile, his father seemed to age years overnight, and soon became an addict to the drugs Volpe made with Manic Depression.

With his Stand now in use, Volpe wonders if the awakened Stand granted Tonio something similar in function, but opposite in intention, alluding the hereditary value of Stands. Volpe's Manic Depression affects the neurochemical processes of the body, resulting in uncertain and often negative health effects, most notably drug addiction. Meanwhile, Tonio Trussardi's Pearl Jam targeted disease and bodily ailments, healing them and improving their health.

Volpe later enters college where he meets Pannacotta Fugo, his future enemy. Volpe takes an instant dislike to Fugo, who pretended to be somewhat of a model student, whereas Volpe's apathy followed him into college, leading him to rarely show himself in class. The contrast annoyed Volpe, who knew Fugo's model behavior was nothing but a sham, and that he gave as little care to being there as Volpe did. When Fugo snapped at a professor who ridiculed his grandmother after her death, Volpe isn't surprised that Fugo got himself expelled by hitting the professor with a 4 kg dictionary.[7]

After Giorno Giovanna takes over Passione, the Sezione Droghe flees south to Sicily. This causes them to become wanted persons in the gang, prompting Giorno to send Fugo, Sheila E, and Cannolo Murolo after them while serving as a mission to redeem themselves.

In a warehouse at Villa San Giovanni, Strait of Messina, the masochistic Vittorio Cataldi calls out for Volpe after mistakenly forgetting the damage he would receive after attacking Sale, who had been sent by Passione to ambush them. Volpe reminds him that his Dolly Dagger can only reflect seventy percent of damage. He slams his fist on Vittorio's chest which heals him, but the impact knocks him down. Angelica Attanasio is amused by this, then points at the plastic sheet that Volpe was holding and realizes that it is Zucchero, Sale's partner, who had used his Stand Soft Machine to deflate himself and get close to the narcotics team. Vittorio stomps on Zucchero on the ground who could no longer properly function due to Volpe's Manic Depression.

Their leader Vladimir Kocaqi enters the room and scolds Volpe for fighting and tells him that he should leave the battles to the rest of the team. Kocaqi reminds him that he is the heart of the team and that he could rule the world with his Stand, Manic Depression. Volpe only retorts that Kocaqi could also do it with his Rainy Day Dream Away, while Vittorio jokingly asks if his Dolly Dagger is also as good as theirs.

Later on, Volpe interrogates Zucchero, who can only make whining noises to answer him, about Fugo. It is revealed that back when he ambushed Team Bucciarati on the boat, he had taken down Narancia Ghirga and Fugo's Stands first because he saw them as the greatest threats, catching Volpe's attention. Kocaqi mentions that Giorno made a donation in Narancia's name to a church in Naples where his funeral was held, but there were no funerals for Fugo. Volpe is in disbelief that Fugo would ever join the mafia due to Fugo's temper. Angelica pokes fun at him before her mouth suddenly bleeds. Angelica had been born with a blood disease, so Volpe uses his Manic Depression to slow the progression of the illness. Knowing he is the best for the job, Kocaqi decides to confront and fight Fugo alone, bringing Zucchero under the influence of Manic Depression's drugs as bait, while the rest of the team move to another hideout after seeing that Fugo and the others are right on their tails.

Soon, learning of Kocaqi's death, the three do not waste time grieving and decide to avenge the old man by finding a Stone Mask in a Nazi bunker, which was advised to empower Volpe by Kocaqi. Before exiting the hideout, Volpe leaves behind a carnage of the corpses of Sicilian gangsters covering every corner of the room. They head to Ortygia and later track down Fugo, Sheila E, and Murolo on a helicopter flying over the Ionian Sea and uses Angelica's Nightbird Flying, which incapacitates all the passengers, sending their helicopter into the sea. Vittorio's celebration is cut off as Volpe and Angelica realize that Fugo and Sheila E are still alive. Volpe then advises Vittorio to stick to the plan and retrieve the Stone Mask before Passione can find it. Unbeknownst to them, Vittorio is unable to retrieve it after the Mask has been destroyed by Cannolo Murolo and dies from self-inflicted wounds.

Sheila E confronts him alone by driving over him with a car, but she is stopped by his Manic Depression. Volpe remembers his own past during his fight with her, revealing an apathy for the world around him as well as his lack of passion. Noticing Nightbird Flying's ability wearing off the mob, Volpe frantically looks for Angelica whom he soon finds staggering towards him. He is relieved to see her, and she tells him that his smile is cute before she collapses to the ground. Volpe, enraged, screams into the night and approaches Sheila E. She is then held hostage by Volpe at the Temple of Apollo. He tortures her with Manic Depression to call out for Fugo, but she is too weak to answer due to his fingers around her throat and nearly passes out.

Volpe's hand is cut off by Fugo, who finally appears to confront him. Having finally found a common point with Sheila E, Fugo understands the empathy his old companions felt for each other. The two begin to battle, but with the use of Nightbird Flying's remaining powers which Volpe had kept alive albeit at the brink of death, he narrowly avoids Purple Haze's fists with the virus capsules seemingly gone from its knuckles. Fugo's newfound resolution upgrades Purple Haze in time before Volpe can make a fatal blow. Inches away from Volpe and having kept a virus capsule in his mouth, he breaks it and sprays the virus into Volpe's face, who dies an explosive and horrible death instantly.