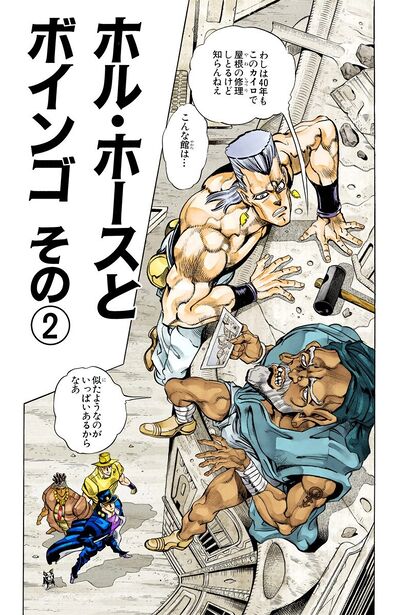 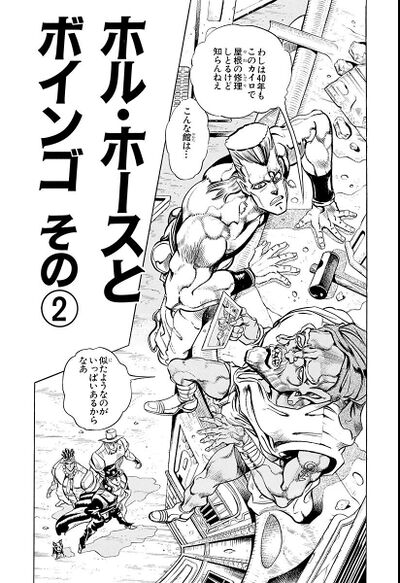 Hol Horse and Boingo, Part 2 (ホル・ホースとボインゴ その②, Horu Hōsu to Boingo Sono 2), originally Stick Your Fingers in Their Nose (鼻に指をつっこめ, Hana ni Yubi O Tsukkome) in the WSJ release, is the one hundred fifth chapter of Stardust Crusaders and the two hundred eighteenth chapter of the JoJo's Bizarre Adventure manga.

In Cairo, the Joestar group searches for DIO's mansion. Hiding behind a wall, Hol Horse watches the group and prepares to assassinate them before they can find DIO's hideout. Boingo stays near him, hiding under a box. Hol Horse gets angry at Tohth's prediction, which states that Hol Horse will stick his fingers up Polnareff's nose, and then proceed to tickle him causing the entire group to bleed and pass out. Hol Horse questions why he can't just use his Emperor to shoot them, but Boingo explains that if he tries to change fate he will suffer. As Hol Horse talks with Boingo, Polnareff sneaks up behind them. Hol Horse tries to attack, but Silver Chariot is too fast and stops him. Knowing Hol Horse's personality, Polnareff looks for his partner, finding Boingo hiding under the box. While Polnareff is distracted, Hol Horse sticks his fingers up Polnareff's nose.