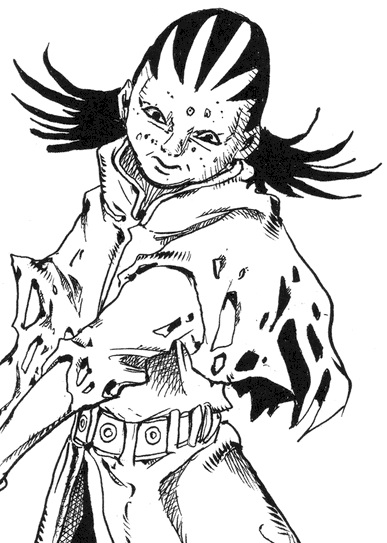 Kocaqi is the leader of Passione's former narcotics division. He is a quiet elderly man who took part in gang activity prior to joining Passione.

Kocaqi is a Stand user who wields Rainy Day Dream Away which he uses to manipulate the emotions of his enemies.

Kocaqi appears as a rather short old man with worn down clothing, holding a black umbrella.

Despite his age, he is described as fit, and his back is straight.

Despite his profession, Vladimir Kocaqi is a gentle and wise old man, who cares for his team. Cannolo describes him as a quiet man until someone crossed him. On the other hand, he despises immoral men like Cannolo who only act for themselves. Voodoo Child demonstrates that because of his personality, he feels no guilt for anything he's done.[3] He also seems to have a sense of mercy, despite being a man working for a cruel organization, chose not to kill Sheila E and Fugo during their battle, and doesn't use hostility when fighting. Even after death, Giorno Giovanna felt that his death was a waste, despite being the one to put a hit on him.[4]

As a Sicilian, he tends to favor his countrymen's way of thinking. He explains that life is inherently unfair and that people have to accept it, explaining to Vladimir that lashing out in frustration is a pitiful answer to life's hardships. Moreover, trying to only count on one's will is also useless. He says that he favors silence.

Rainy Day Dream Away allows Vladimir to lock any person's emotional state. This deceptively redoubtable power made him so dangerous that the Boss himself didn't want to antagonize him.

During World War II, Kocaqi lost his sister while trying to escape the carnage of the Battle of Sicily, granting her everlasting peace with his Stand, Rainy Day Dream Away. Kocaqi joined Passione at one point and became leader of the Sezione Droghe. Thanks to his powerful Stand, not even the Boss dared to cross the team.[3]

After Diavolo is defeated and his team is removed from Passione by Giorno Giovanna, he and the other members take refuge in Taormina, Sicily.

In a warehouse at Villa San Giovanni, Strait of Messina, the Sezione Droghe members deal with a failed ambush by Passione members Sale and Mario Zucchero. Kocaqi enters the room and scolds Volpe for fighting and tells him that he should leave the battles to the rest of the team. Kocaqi reminds him that he is the heart of the team and that he could rule the world with his Stand, Manic Depression. Volpe only retorts that he could also do it with his Rainy Day Dream Away, while Vittorio jokingly asks if his Dolly Dagger is also as good as theirs.

Later, news arrives that Pannacotta Fugo has been sent to take down their team. Kocaqi mentions to Volpe that Giorno made a donation in Narancia's name to a church in Naples where his funeral was held, but there were no funerals for Fugo. Volpe is in disbelief that Fugo would ever join the mafia due to his temper. Knowing he is the best for the job, Kocaqi decides to confront and fight Fugo alone while the rest of the team stays behind.

As it begins to rain on Sicily, Kocaqi takes the perfect opportunity to strike with his Rainy Day Dream Away while bringing Zucchero along as a bait to lure away Sheila E from Fugo. He ambushes them in Teatro Greco, and after Cannolo Murolo flees after spotting him, Fugo approaches him closer to let him to enter Purple Haze's range. Kocaqi confronts Fugo about his temper and contrasts the Sicilians' forbearance to his impatience as well as his way of attempting to make things right. Fugo is surprised to see that he hasn't snapped and attacked yet despite being insulted by the enemy. Hesitant to attack Kocaqi, he moves forward before staggering due to the ground crumbling underneath him. Suddenly, his body loses balance entirely and he realizes that he has been caught in Rainy Day Dream Away's ability to lock any feeling or sensation. With Fugo trapped into falling across the ground forever, Kocaqi leaves him to look for Murolo and Sheila E.

Sheila E hears Fugo's screams and rushes to Teatro Greco where Murolo and Kocaqi await her. She immediately unveils Voodoo Child and attacks Kocaqi who barely avoids her Stand's fists. Kocaqi's wounds turn into lips which speaks in his dead sister Amelia's voice instead of his own. He claims that he has no guilt, making him immune to Voodoo Child's abilities. He narrates his indifference towards his tragic past. At the same time, he traps Sheila E into thinking that she couldn't beat him and locks that feeling inside her. Kocaqi tells her that he will not kill her before turning to Murolo. He then begins to ask him questions pertaining to his involvement with La Squadra Esecuzioni during their attempt to uncover Diavolo's identity.

However, they are interrupted by a loud thunder in the distance. Kocaqi realizes that Fugo had used Purple Haze to blindly throw himself in the sky and exploit Rainy Day Dream Away's ability by falling at the same speed as the raindrops. Fugo and Purple Haze fall towards Kocaqi and the Stand's fist fatally hits Kocaqi, who instantaneously dies from the impact of the blow as his body melts due to Purple Haze's virus.