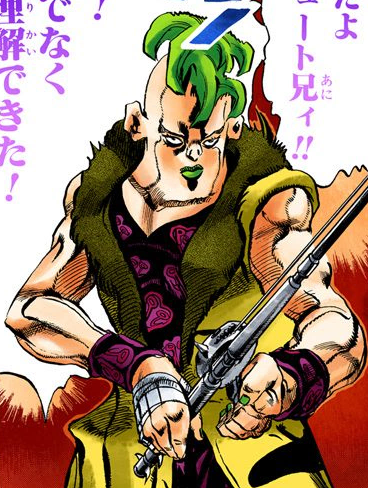 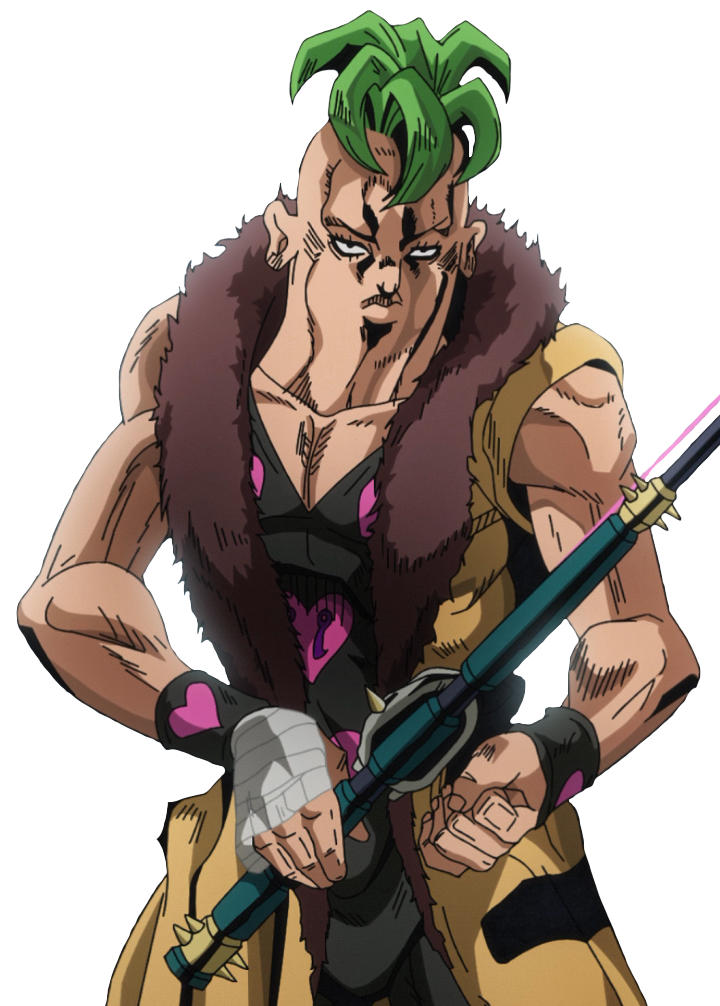 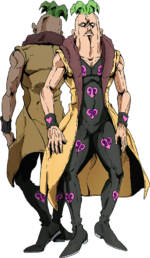 From coward to hardened assassin

Pesci is introduced as a weak-willed man, using threats when he should act, and is overall rather timid. Pesci lacks nerves and composure, panicking when the ice he uses to preserve himself from The Grateful Dead's power is destroyed and begs for his life when Mista has him a point-blank range. The TV anime adaptation also expands on his cowardice by showing his expressions of horror at the gruesome way people are killed in his line of work, most openly at Sorbet and Gelato's demise. Pesci is also initially shown to be very unconfident in his abilities, something his superior, Prosciutto, points out and is seen cheering him on.

Later, upon being moved by Prosciutto's determination, notably still powering his Stand when crushed between the wheels of the train they are on, Pesci gains the confidence and ruthlessness necessary to make himself a serious threat to the whole group and nearly kills Bruno Bucciarati during their battle. Bucciarati notes, however, that Pesci's bravery is then replaced by cruelty when the assassin attempted to threaten his friends inside Coco Jumbo.

Appropriate to his namesake, Pesci uses the fishing rod-like Beach Boy to hook people from afar, tearing out their internal organs to kill them.

Pesci was a member of La Squadra Esecuzioni, a team of nine assassins working within Passione. However, the team was frustrated they only received compensation for each kills while the rest of the gang was getting rich from the drug trade. One day their teammates Sorbet and Gelato disappeared while they were trying to investigate the Boss' past. They found Gelato choked on a gag in his house, with a piece of paper on which was written the word "punishment". Later, the team received the sectioned body parts of Sorbet encased in formaldehyde, showing the team the power of the Boss. They despaired of ever finding about the Boss. However, they then heard about Trish Una, and thought that she would be the key to discovering the Boss' Stand ability. The team rebelled and began searching for her. Just after Trish was taken in by Pericolo, La Squadra Esecuzioni ransacked Donatella and Trish's appartment in search for clues, missing a crucial picture of Donatella that was taken by the Boss himself.

Pesci with Prosciutto at a restaurant.

The anime adaptation expands a bit on Pesci's past. Two years prior to the events of Vento Aureo, Pesci was already part of La Squadra Esecuzioni. On the night the team noticed that Sorbet and Gelato disappeared, Pesci was among the hitmen accompanying Formaggio on his assignment. He was briefly mocked and chastised by Prosciutto for choosing to drink a glass of milk on the job instead of a more mature drink.

Pesci is encouraged by Prosciutto.

Pesci is introduced alongside Prosciutto in Naples' train station, tailing Team Bucciarati until they mysteriously disappear from the train. He swears to kill Bucciarati for the death of Formaggio and Illuso but Prosciutto chastises him for his "weak" attitude, stating that he should do the deed before thinking about murder. The two try to pincer attack Bucciarati, Pesci advancing inside the train while Prosciutto walks on the platform but they mysteriously lose his trace.

Using his Beach Boy, Pesci checks the driver's cabin and spots two life-forms. However, he only sees the driver when he drags him out. Pesci keeps searching the cabin and almost discovers the team's transport turtle, Coco Jumbo, but Prosciutto deploys The Grateful Dead, distracting him at the last moment. Afraid for his life, Pesci sets up a bait on the air conditioner button and retreats to the bar wagon, sustaining himself on ice to counter the aging effect of The Grateful Dead.

When Mista tries to activate the air conditioning, Pesci detects him. He hooks his hand and reels him, advancing his hook inside of Mista's arm. He also identifies Mista when he feels the vibration of the gunshot in Beach Boy's line. However, Sex Pistols manages to destroy his ice, sending him into a panic and making him vulnerable to Mista because he makes his Stand disappear. Almost shot down, only Prosciutto's intervention saves him. He is again yelled at by Prosciutto for his cowardice and witnesses Prosciutto shoot Mista in the head. Encouraged by Prosciutto, Pesci finally leads his partner to Coco Jumbo but is then ambushed by Bucciarati. Sitting aside as Prosciutto battles Bucciarati, he is ordered to kill Trish's bodyguards but he hesitates, almost immediately sent flying into a window by Bucciarati's kick. Bucciarati loses the battle but throws himself off the train alongside Prosciutto.

Pesci wakes up and launches Beach Boy to save his partner. He notices that the weight has lightened and assumes that Prosciutto has won but soon realizes that the position of the hand and the weight is wrong. When a passenger comes out and asks Pesci to stop the train, Pesci despairs as it means Prosciutto has been killed but then the aging effect starts again. Pesci discovers Prosciutto beaten and crushed inside the machinery of the train. Inspired by Prosciutto's example, Pesci gains the confidence to complete his mission and, encouraged by the extent of Prosciutto's determination, challenges Bucciarati.

Pesci controls his hook to always reach Bucciarati despite the capo's efforts to escape. He tries to swing Bucciarati to the side and make him crash against a pole to make him feel the same pain as Prosciutto but Sticky Fingers hangs onto a bolt. Pesci then swings the line upward but Bucciarati then opens the roof of the train, and protects himself from the incoming power cables. Still, the hook has almost reached Bucciarati's heart. In the train, Bucciarati then attacks the line to zip himself into several pieces. Pesci loses trace of Bucciarati and attacks a random civilian. Pesci briefly feels the faint beat of a heart but Bucciarati cuts it open. Trying to persist inside of the train as there is no way Bucciarati could have escaped his senses, Pesci is slowly taken by doubt. Fearing that Bucciarati is trying to kill Prosciutto and leave him vulnerable, Pesci stops the train to check on Prosciutto. He then meets with Bucciarati who's coming out of the train.

Pesci decides to kill Bucciarati here and there and avenge Prosciutto before the latter expires. He sends Beach Boy's straight at Bucciarati's heart, bypassing his arms. Thinking himself victorious, Pesci tries to pull the line but Sticky Fingers pulls it and ties Pesci's neck. It yanks the line, breaking Pesci's neck. Nevertheless, Pesci is still determined to make Bucciarati pay. He releases Trish from Coco Jumbo and falls, attempting to crush the turtle. When Sticky Fingers comes to attack, Pesci enters the turtle and tries to strangle everyone in the turtle. However, Sticky Fingers then pulls him out of Coco Jumbo and pummels him. He is separated into several pieces and thrown into a nearby river, killing him. 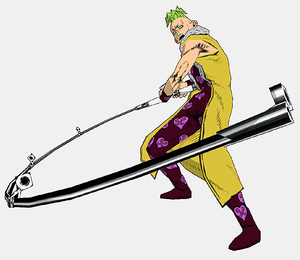 File:Giogio17.png
Pesci appears in GioGio's Bizarre Adventure as the enemy faced in Chapter 5-2, though he also appears unconscious as a prop in Chapter 5-1. In Super Story Mode, Pesci's first move once the battle begins is to hook Bucciarati before he or the player can react; this does not occur in Another Story Mode. Aside from a single melee attack if the player gets too close, Pesci's moveset relies upon him gaining distance between himself and the player in order to use Beach Boy. Pesci can send Beach Boy's lure through the ground to knock the player down, or send it through the air in either a straight line or a figure-eight shape to hook them instead. If caught, the player character will begin taking damage; the player must hold the left stick in the opposite direction of Beach Boy, to avoid Pesci knocking the player down and dealing heavy damage. If Pesci reels the player character close enough to him, he will perform a kick, dealing damage but also freeing them from the line.
Pesci / Beach Boy
Commands
Normal Mode
Stand Mode

I understand through your spirit!
I'm gonna reel you in!
Non-Playable Character

Pesci appears as a stage hazard and situation finish on the Naples Train Station stage: both him and Prosciutto appear near the train during the beginning of the match, and after some time, board the train. If one of the fighters is knocked into the hazard indication area, Prosciutto encourages Pesci by saying he needs to trust himself, and then Pesci will throw his Stand's line into the stage. In a straight line perpendicular to the train, Beach Boy will shoot out of the train before being quickly reeled back: any character caught by it is sent flying into the side of the train with a soft knockdown.

As a situation finish, Pesci's Beach Boy hooks the opponent by the head/neck area: the train then takes off and the unfortunate loser is dragged away while both Pesci's laugh and Prosciutto's encouragement can be heard.

Both Pesci and Prosciutto appear as the stage hazards for the Naples Train Station stage: as soon as Prosciutto is defeated, Pesci will appear. His field of action is the space between the two trains with him patrolling that general area and his line of sight is a cone in front of him: anybody caught in it for too long is hooked and left stunned, vulnerable to their opponents before eventually being yanked and sent into the side of the train. As he will prioritize the fighter closest to him, Pesci himself cannot be damaged by any means, making him a permanent hazard for the rest of the match.

Skill: I can read all your movements

In the light novel JORGE JOESTAR, an iteration of Pesci lives in the 37th universe, appearing similarly to his original universe counterpart. He is not actually mentioned in the novel by name but he is drawn in an illustration.

Pesci and others jumping into Morioh

Nero Nero Island, where the base of Passione is located, suddenly grows legs and starts moving through the ocean headed toward Morioh. Some ordinary citizens panic and attempt to escape at the island's harbor. Pesci, Cioccolata37, Secco37, Prosciutto37, Ghiaccio37, and Melone37 ambush and murder them. Secco's Evil Dead conceals the harbor, making their actions invisible to those within the island, such as Bruno Bucciarati37. One man manages to escape and tries waving desperately toward Morioh for help before he is killed as well.