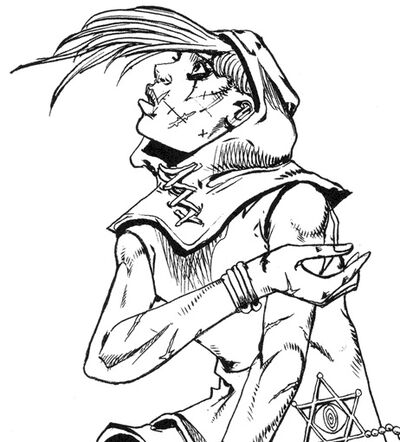 Exsanguination by damage caused by his own Stand[4]

Vittorio is a member of Passione's former Sezione Droghe. He is also a Stand user who wields Dolly Dagger in battle.

Vittorio is a puny teenage boy, with a frail build, said to have large eyes and sunken cheeks by Zucchero.[5] His body is covered in scars from self-inflicted injuries used to activate his Stand. He possesses long bangs hanging in front of his face.

Vittorio wears a sleeveless cagoule from which two chains hang, each decorated by one six-pointed star. He also wears a pair of tall sneakers going up his calves.

Vittorio is a psychotic masochist, obsessed with pain. He has a habit of cutting himself with his dagger, expressing pleasure with a loud "Gigigigigi!" while doing so. This masochism is tied to his belief that pain calls the life force inside him.[5] In a related way, Vittorio thinks that civilized life is lacking and that it is a veneer for the emptiness of life, hence his love of pain.

Otherwise, Vittorio acts like a typical thug. He is uneducated and rude, sometimes overfamiliar with people and quick to seek fights. Likewise, he doesn't care about the crimes he's committed. According to Cannolo Murolo, Vittorio doesn't care about anything as he was born at the bottom of society, treated like scum and given no hope.[4] As a result, Vittorio lashed out at everything around him. However, he genuinely admires Volpe and is loyal to him.[5]

Vittorio's Dolly Dagger is a Stand appearing in the form of a knife. He can reflect 70% of all damage inflicted to him into anyone whose reflection is on the blade.[5] It gives him surprising durability and can be fatal if someone recklessly attacks him.

Vittorio Cataldi is a member of Passione's Sezione Droghe. After the Boss is defeated and Giorno Giovanna takes over, the team goes into hiding.

In a warehouse at Villa San Giovanni, Strait of Messina, Vittorio slices his own flesh as Sale, a former member of Passione, watches him. When Sale does not laugh at Vittorio's jokes, he challenges him to summon his Stand Kraft Work. Terrified, Sale wonders how Vittorio is a part of the former narcotics team that everyone dreamed of joining and had once turned in an eleven figure profit. Nearby, Angelica sluggishly sings the Sicilian song Vitti 'na crozza. Sale suddenly feels dizzy and loses his ability to make rational decisions, not knowing he is being affected by Nightbird Flying. He takes the challenge and slams his fist into Vittorio's chest, fixing his heart in place. Suddenly, Vittorio's foot raises up and sends Sale flying. When he looks up, he notices someone's heart fixed in space and realizes that his attack was reflected on him. He instantly dies on the ground.

Struggling in pain, Vittorio calls out for Volpe. Volpe reminds him that his Dolly Dagger can only reflect seventy percent of damage. Volpe slams his fist on Vittorio's chest which heals him, but the impact knocks him down. Angelica points at the plastic sheet that Volpe was holding and realizes that it is Zucchero, Sale's partner, who had used his Stand Soft Machine to deflate himself and get close to the narcotics team. Vittorio stomps on Zucchero on the ground who could no longer properly function due to Volpe's mysterious Stand ability. Vladimir Kocaqi enters the room and scolds Volpe for fighting and tells him that he should leave the battles to the rest of the team. Kocaqi reminds him that he is the heart of the team and that he could rule the world with his Stand, Manic Depression. Volpe only retorts that Kocaqi could also do it with his Rainy Day Dream Away, while Vittorio jokingly asks if his Dolly Dagger is also as good as theirs. Soon, the Sezione Droghe team is informed that Passione is unto them, so Kocaqi sends himself off to ambush the agents.

Later, learning of Kocaqi's death, the three remaining members spend less time grieving and decide to avenge the old man by finding a Stone Mask in a Nazi bunker under the Cathedral of Syracuse, which was advised to Volpe by Kocaqi. Before exiting the hideout, Volpe leaves behind a carnage of the corpses of Sicilian gangsters covering every corner of the room. The team subsequently takes down a helicopter with the Passione members Pannacotta Fugo, Sheila E, and Cannolo Murolo in it. Vittorio's celebration is cut off as Volpe and Angelica realize that Fugo and Sheila E are still alive. Volpe then advises Vittorio to stick to the plan and retrieve the Stone Mask before Passione anyone else find it.

Arriving in the Cathedral of Syracuse, Vittorio finally retrieves the Stone Mask but it is stolen by Murolo who emerges unharmed from Nightbird Flying's attacks earlier. Vittorio uses Dolly Dagger to slit his own throat and reflect the damage to Murolo, but surprisingly, no damage comes to him. Murolo destroys the Mask and reveals the true nature of his All Along the Watchtower to divide the damage of incoming attacks to him by fifty-three. He also reveals that destroying the Mask was a secret part of the mission, an agreement between Passione and the Speedwagon Foundation to stop the menace. As he attempts to redeem Vittorio, the latter only stabs himself repeatedly, killing himself in the process.