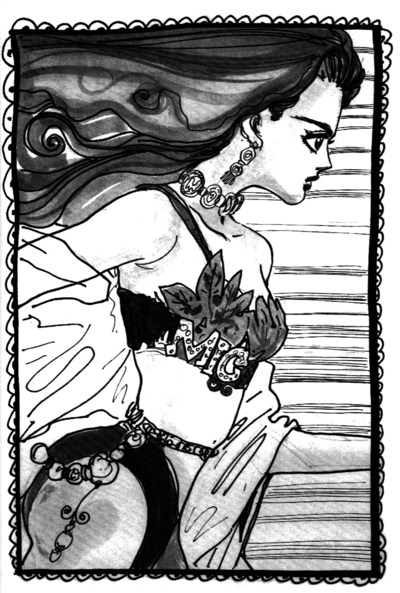 Michal (ミカル, Mikaru) is a secondary antagonist featured in the light novel The Genesis of Universe, based on Stardust Crusaders. She particularly appears in the first chapter, "One-Way Trip from the Desert to Hell City".

Michal is a Stand User and wields Dark Mirage which can create dizzying illusions from mirages.

Michal is a young girl hailing from the Egyptian desert. She is said to have the same brown skin as her brother Absalom, long hair, and to have a pretty face but a shy look. Michal wears a tunic but illustrations suggest that she also only wears a bra and panties under her tunic, plus a transparent shawl. The bra is decorated with a leaves themed decoration and Michal wears several jewels like earrings and a necklace.

Michal is a nearly mute girl who supports her brother in any way she can, even with contrasting goals. She is reluctant to fight, but does so to help her brother, going as far as to pledge loyalty to DIO just to follow him. Her Stand, Dark Mirage, represents the life she had in the desert, as mirages were something constant and fascinating for her.

Michal is a young girl who was raised in the desert until she lost her parents in a train accident four years ago, as well as her ability to speak because of wounds suffered in her throat. She was rejoined with her brother, Absalom, thanks to DIO and both pledged loyalty to him, as he promised to create a world different from the desert and civilization. DIO also healed her throat but Michal seldom talks. Absalom, growing great hatred towards civilization, accepted the offer right away, but Michal wasn't interested in DIO's concept of the world as Absalom was.

The Genesis of Universe: One-Way Trip from the Desert to Hell City

Michal decides to help her brother defeat the Joestar group, torturing them with constant mirages. Even though she slightly hesitates in fighting, Michal accompanies and supports her brother nonetheless when he tries to defeat the Joestar group for a second time, creating an entire town with her Stand. Staying hidden in the mirage town, now turned into reality thanks to her Stand, Michal attacks Jean Pierre Polnareff with a mass of flames, created when she tried to hit him with a mirage-generated oil tank. Polnareff discovered her location, but was unable to fight because of his policy of not hurting women. To not hurt Michal, Polnareff ended the battle with a single blow with the back of Silver Chariot's sword, knocking her out. Similar to Absalom, she was rescued by villagers who mistook the Joestar group as villains.[1]