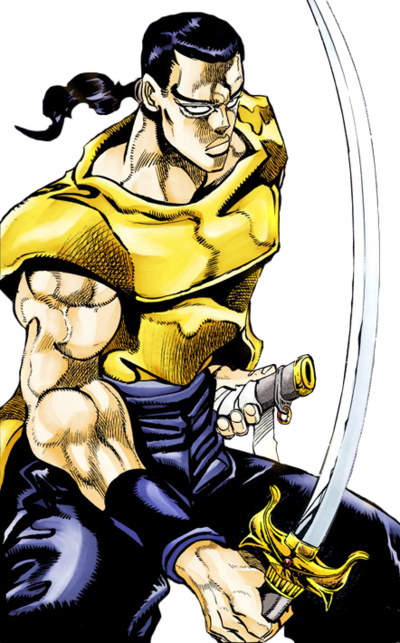 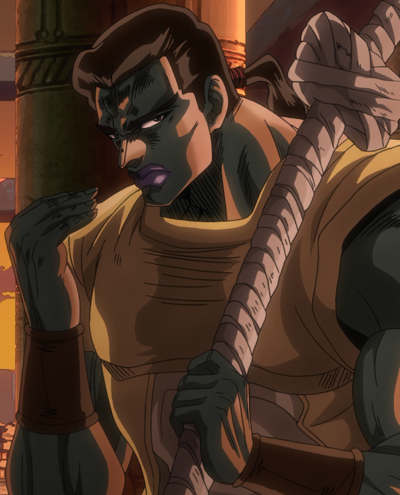 Chaca (Heritage for the Future)

JoJo's Bizarre Adventure (SFC Game)
Heritage for the Future (playable)
“
Father deserved to die, and so did that other guy! And now, I think I'll cut you in half too.
”
—Chaka possessed by Anubis, Chapter 193: Anubis, Part 1

Chaka (チャカ, Chaka) is a tertiary antagonist featured in the third part of the JoJo's Bizarre Adventure series, Stardust Crusaders.

He is an Egyptian farmer who finds Anubis, a sentient Stand bound to a sword that works for DIO. After being possessed by the sword and temporarily becoming its Stand user, Chaka is manipulated to go to battle with Jean Pierre Polnareff. 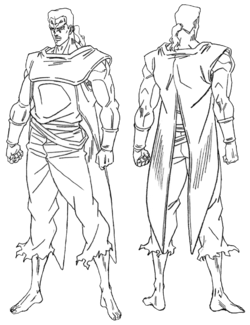 Chaka is an Egyptian man of average height and muscular build. He has dark hair that is fashioned into a ponytail. Chaka has prominent cheekbones and lips, and his eyebrows curve upwards towards the outer ends. He wears a tunic, a cape, a thin waist sash, wristbands, and ragged pants that are torn above his shins.

Chaka is a meek farmer who works with his father. Although often insulted and prohibited from doing much, he remains loyal and respectful. He is rather curious and pushes his father to let him see Anubis. He is also somewhat fearful, trying to rid himself of the blame and standing in shock when Anubis pierces his father's chest.[3]

After unsheathing Anubis and succumbing to its control, he becomes a cold-blooded killer. His respect for his father and human life vanishes, and he eagerly accepts his mission to kill the Joestar Group.[3] Polnareff describes him as honorable for directly challenging him to battle and swiftly introducing himself,[4] but how much of Chaka's true self influenced this decision is unknown.

Chaka temporarily wields the Stand Anubis when he picks up the sword. It is a Sentient Stand that possesses Chaka's mind and makes him a deadly fighter despite his lack of experience. Polnareff notes that his stance and grip are like an amateur's.[4]

Hearing something from the sword

Chaka is a young farmer traveling with his father and his father's two companions near The Nile. His father berates him for falling behind, and mockingly asks whether Chaka is actually his son. Meanwhile, Chaka notices a sword on the ground. Chaka's father attempts to unsheathe it, but the sword refuses to budge, even with the man and his two friends attempting to pull the sword out together. Chaka asks twice whether he can try to do it too. Much to everyone's surprise, Chaka successfully unsheathes the sword. As he starts hearing something from the sword, his father grabs him from behind and demands that Chaka gives the sword to him. Suddenly, Chaka stabs the sword in his father's chest.

As Chaka claims that it was an accident, his father's friend attempts to pull the sword out but his head gets sliced open instead. The sword begins speaking to Chaka, revealing itself as the Stand Anubis. Anubis takes control of Chaka, claiming to make him a master swordsman. Chaka's personality immediately changes after being possessed. He declares that his father and the other guy deserved to die, and now he'll cut down the remaining guy as well. As the man tries running away, Chaka slashes through his father's cow which slices the man's body in half. Remarkably, the cow is unharmed due to Anubis's ability of selective intangibility. Anubis then gives Chaka orders to kill Joseph Joestar, Jotaro Kujo, and Jean Pierre Polnareff.[3] 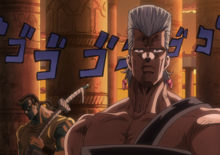 Chaka confronts Polnareff at Kom Ombo Temple, introducing himself and his Stand for a one-on-one battle. Polnareff praises him for getting right to the point and the two begin their duel. After Chaka unsheathes Anubis, Polnareff is confused due to Chaka's grip and stance being that of an amateur's. However, Chaka dashes behind a pillar and then slashes through it using Anubis's selective intangibility to cut Polnareff. Chaka continues hiding behind various pillars, laughing while Polnareff is afraid as to where he may strike from. Suddenly, Chaka slashes a pillar behind Polnareff, revealing that he could do more than just pass through objects.

On top of the pillar he just cut, Chaka attempts to attack Polnareff by having the sword phase through the pillar as it falls. However, Polnareff shoots Silver Chariot's sword at a nearby pillar, having it rebound and impale Chaka's neck. Chaka lies on the ground immobilized after his defeat, though Polnareff mentions that he hasn't killed him.[4]

Chaka's role in the game's story modes remains mostly the same as it did in the manga. After DIO steals the Anubis Sword from a museum warehouse, Chaka finds it by chance and then becomes possessed by Anubis. Anubis, who is grateful for being "rescued from the darkness of the warehouse", forces Chaka to engage the Joestar party in Egypt. Polnareff, Jotaro, Avdol, Iggy, Vanilla Ice, and both forms of Joseph face him in their respective story campaigns. In the PS1 version's Super Story Mode, Polnareff faces Chaka in Chapter 20, with the fight's Secret Factor requiring the player to finish him with Polnareff's Last Shot move.

Chaka is one of the special characters in Heritage for the Future that does not turn into his child form. Rather, he and Anubis Dual-Wielding Polnareff turn into the child that was possessed by Anubis.

Depending on whether the game's censorship is on or not, the color of Chaka's blade will change. If the censorship is on, the blade is colored brown. Strangely, Khan and Anubis Dual-Wielding Polnareff's swords remain unchanged.

Chaka appears in Diamond Records as a playable character in both the Action Battle and Tactical Battle game modes. He has one 'Solitary' type 5 star statue. Chaka's moveset in both game modes is comprised of various attacks inspired by the anime, using the sword of Anubis.
Moveset

Chaka's basic attack string is a combination of up to five various slashes with his sword. In Tactical Battle, this is cut down to only three hits.

Chaka jumps at the opponent and slashes them with his sword.

Chaka swiftly dashes past his opponents, slashing everyone in his path. In Tactical Battle, this damages all opponents present on the stage. (Unlockable)

Chaka unleashes an aggressive rush of slashes with his sword.

(Counter) Chaka pulls his sword slightly out of its sheath. If he is hit while this SP is active, he will counter the opponent's attack by unleashing a heavy slash against them. (Unlockable)

A pillar appears, which Chaka cuts in half. He then attacks opponents from on top of the pillar as it falls down. In Tactical Battle, this damages all opponents present on the stage. 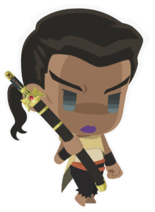